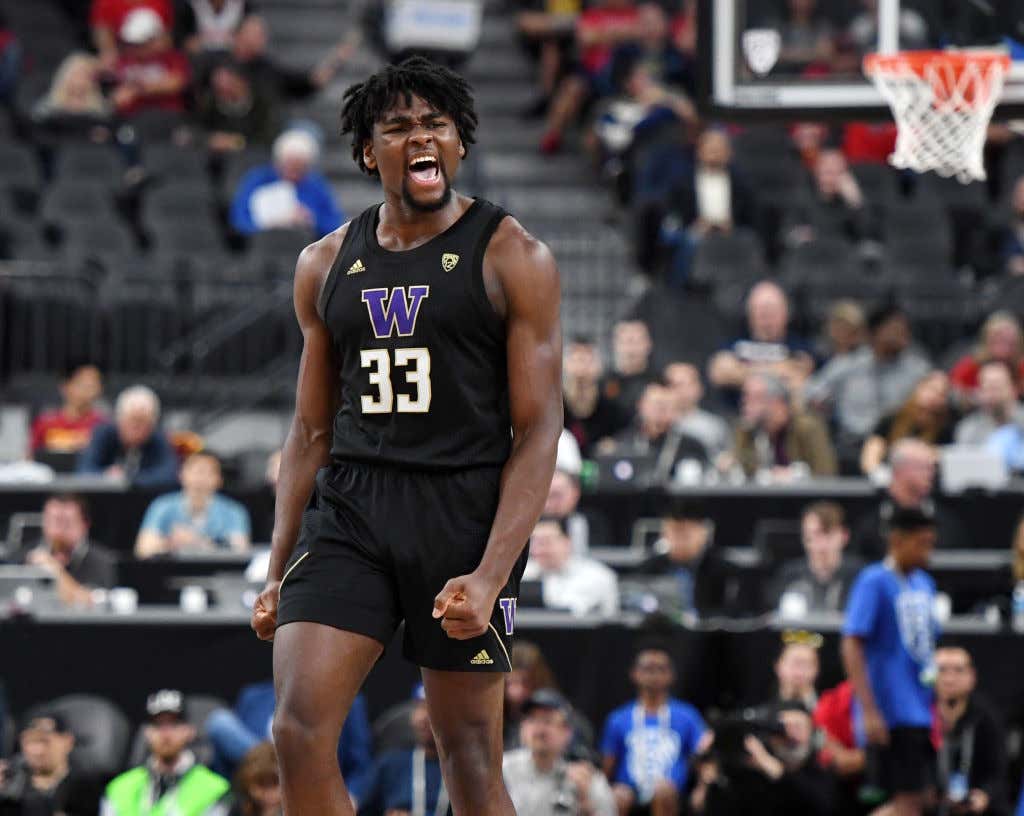 We're back with another look at our next potential Celts draft pick through nothing but YouTube highlights and today we're talking big men. A position of need in my opinion for the Celts to snag with at least one of their billion picks so I'm paying attention extra close today. You can catch up on all the previous prospects here, and so far the stoolies have not let me down when it comes to guys I should take a look at.

Every time I throw out the tweet asking for our next prospect, I see this name a lot which tells me I had to get my eyes on this kid. Don't know a damn thing about him and chances are you might not either, so let's take it from the top

Looking at his size/stats, is it crazy to put Isaiah Stewart in the Precious Achiuwa category? They both are similar in size and in production, and if there's one thing we know about our lord and savior Danny Ainge it's that he loves himself some 6'9 PFs/Cs. Can't get enough of em. Has to have em. So is Stewart that guy? Well the latest mocks I've seen have him going in the late teens/20s so he fits our main rule of having to be available around where the Celts are picking.

First impression from that video is this dude looks like a physical monster that moves fairly well. Love that considering he's going to be undersized at his position. Like Precious, I see a player with a high motor which is exactly what I want from a reserve big on this team. An obvious takeaway is he uses his speed to get down the floor and establish his position early. Don't hate that one bit. I can deal with the whole 6'9 thing if you're going to just out work and out hustle everyone. When I think of what I want a potential big to bring to this team first and foremost it's rebounding/defense/rim protection. This is a player who had a 19.5% DREB% and a 7.0 BLK% while also finishing with a 93.6 Drtg. Seems to work for me.

Now one of the things I'm a little nervous about is a lot of those offensive highlights came from him posting up. While I appreciate his nice jump hook, I'm nervous that won't exactly translate at the next level the same way it did in college. We just saw how Grant sneaky struggled in that area. There were some pretty nice looks at him shooting threes, something he didn't do a whole lot last year (0.6 3PA) but that form looks pretty good to me for a big man. He also shot 77% from the FT line so that tells me there's promise when it comes to his shooting ability at the next level. That jumper has a nice high release, I love his follow through so I'm willing to bet this is a weakness that he can certainly develop once he gets into your program.

When you think of the 6'9 PF/Cs on this team, there's one thing they all have in common. You gotta be able to make a jumper/three. Doesn't matter whether you start or come off the bench, they need their bigs to be able to stretch the floor or at least be a threat to stretch the floor. I'm not sold Stewart is there right this second, but this draft is all about finding projects to add to your depth. They don't need guys who are ready right this second.

All in all my overall takeaway is Stewart is a high energy big who is physical as hell who would help immediately on the glass/rim protection but is still a big time project offensively. For me personally, I'm cool with that because I just need these late first round prospects to be able to fill a specific need where Brad can get creative in where he plugs guys in depending on the situation.

Conclusion: IN on Isaiah Stewart, but he's not my first choice at 17 so he probably won't be available. If he's there at 26 that's a different story and I'd absolutely be down to take a flier on him. He might be a little repetitive with Grant, but that late in the draft you're just throwing shit against the wall and seeing what might stick.