It's been 24 hours since the not at all unexpected, yet still sad, retirement of James Develin, the metahuman blocking machine, former Ivy League standout and three time Super Bowl champion. And in the time since the candle of his all too brief seven year career was blown out, his team, his head coach and his now former teammates have given him the high praise he earned, play after play, week after week, one crushing block, power run and spread formation reception at a time.

But before I get to them, it's important to point out it didn't take Jimmy Neckroll's retirement for him to be honored. He was a man appreciated in his own time. YouTube are filled with highlight videos, my favorite of which is all his greatest blocks from the championship 2018 season. It is almost 20 minutes long. And since the jackbooted goons from the NFL's Ministry of Truth will take this down shortly after I post it, the link is here.

And this one, when he blasted Reggie Ragland two yards into the end zone in an obvious inside run look to send the Patriots to the Super Bowl. When everyone knows what you're going to do and they still can't stop you, that's the sign of true greatness.

So while the fans of old school tackle football and the endangered species that is the modern fullback appreciated Develin, they are not alone. Here is a team press release:

“To some people, James Develin may be ‘unsung’ in terms of publicity and fame, but to his coaches and teammates he is one of the most appreciated and respected players we have ever had. In football, there are a lot of tough, unselfish and dependable people who bring positive leadership on a daily basis, but the name James Develin represents those qualities at an elite level.  A tribute to the impact James had on our success, of the five seasons in which he appeared in every game, we won three championships.  Any team would be fortunate to have a James Devlin-‘type’ on its roster but the reality is he is a rarity and we are very fortunate he was a Patriot.”

Oh dear Lord. I get all foggy in the glasses any time Belichick bares his soul like this about a player who went above and beyond what even the most demanding coach in sports asked of him. And his former teammates commenting on his retirement post on the 'Gram? So. Many. Feelings.: 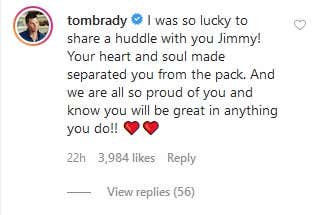 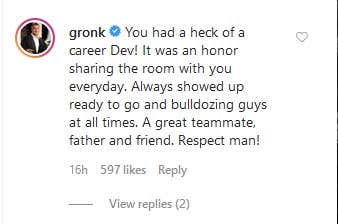 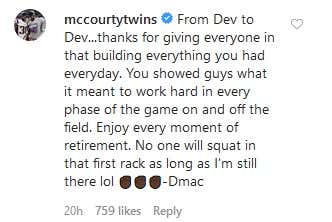 I could go on but … actually that's not true. I can't go on. I need a few minutes to compose myself and every farewell tribute to the man only makes it harder to see him go. All we can do is to be grateful for the time we had to spend with this rare athlete and truly special part of the greatest Dynasty in all of sports. A "rarity" indeed. And his like passes this way but once. Godspeed, Jimmy Neckroll.