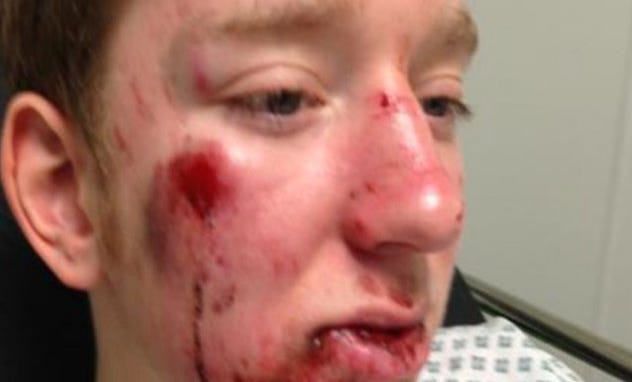 Inquisitr – Taron Stead, 17, a cyclist, was recently hit by car. The mother inside of the car that struck him told him that she could not stop to help him because the blood on him was too scary for her kids. Stead had just bought a new mountain bike that morning and was hit in the early morning traffic last Friday. He was left bruised and bloody by the side of the road. According to the Huffington Post, the male driver of the silver car that hit him stopped and a woman got out. The woman informed him she couldn’t help him because they were late getting their kids to school and the blood on his face would upset her children. The woman returned to the car without even asking if he was okay and the car drove away. “Taron said the woman in the car got out looked over at him, told him she had children in the car who were upset and she didn’t want them to be late for school, then the car drove off. I can’t believe anyone would leave an injured child at the side of the road after a crash, but it was rush hour and it would have been busy so I am hoping that witnesses come forward and help the police trace the driver. There is CCTV in the area too. I hope the driver and his passenger who drove off see Taron’s injuries and think about their actions. Fortunately he was wearing a helmet, or I dread to think what might have bloody happened,” said Naomi Pickard, 45, Taron’s mother. Staff members from Sheffield University, which is close to where Stead got hit, found the teen and called paramedics, reports the Star. Pickard says that staff at their local Halfords were so “horrified” by what happened to Stead that they want to repair his bike for free.

Rock and a hard place for you boy KFC here. On the one hand I really cant stand cyclists. I dont even like calling them cyclists. They’re just people riding a fucking bike. When they get all dressed up in the spandex outfit and put on their special shoes that hook into the pedals and ride all over the road like they’re just as important as the cars, I hate it. There are times I drive by them wishing I could just GTA them and zip off with no repercussions. If you’re secretly rooting for these guys to get hit by a car, then you cant really take their side in a hit and run situation when they do get hit. Also, I really cant bring myself to side with a kid named Taron.

But just as bad as the cyclist is the 2015 Mom. The one who thinks her and her kids are the end all be all. She probably breast fed them in public like an asshole. She probably petitioned the school to change their cafeteria foods so that it was personally tailored to her children and all their made up food allergies. And here shes the mom who damn near killed a kid and says she’s late for school and the blood will upset her precious little snowflakes so she can’t stop to take responsibility for her actions. I hate the “cyclists” on the whole but if we’re speaking about individuals here this mom is the fucking worst. I wish that kid punched her square in the fucking nose and said “Well now we’re both bleeding so how about you help me out, bitch.” Dont be surprised when those little bastards in the back seat of the mini van grow up to do whatever the fuck they want with their car because they watched Mommy mow people down and just say “Sorry!” and drive away. Sometimes kids need to see a little blood and learn a lesson that you cant almost kill people and not do anything about it.