Obviously HUGE news last night. The Blackhawks fired John McDonough and now the organization is on a different and hopefully better path. Change was needed and now it's finally here. I feel good about it. What happens next?

Everything in this blog from here on out is PURE speculation. I will be trying to get information in the coming days, but for right now I don't know much. I don't know if anyone does. For the time being THIS is the President of The Chicago Blackhawks 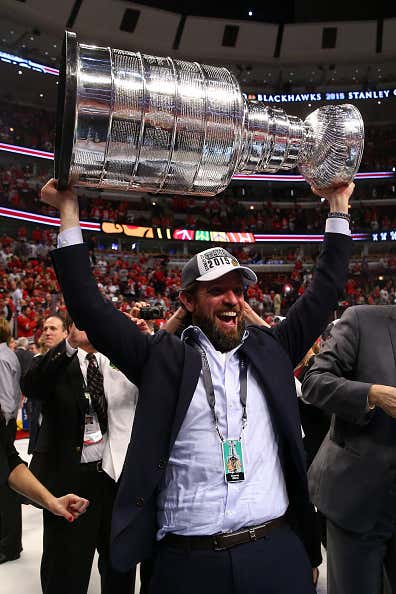 I am including his picture because I think most people don't even know what he looks like. I didn't until like October 2019 when I met him the night I went to the Hawks-Flyers game with the Spittin Chiclets guys. I knew so little about him that I talked to him for a long time that night not knowing who I was talking to. Just thought he was a random nice guy in suite who maybe worked for New Amsterdam Vodka or something. Probably 15-20 minutes went by before we introduced ourselves. Then we talked some more. I certainly don't know him well, but here is my general impression of him...he's bright and thoughtful. He seems like an honest and genuine person. He also seems kind of cool. Not Don Draper cool, but like a closet indie/rock&roll/hippie dressed in corporate attire with a big corporate job. He definitely listens to bands that you've never heard of and goes to Empty Bottle. A guy who seems comfortable in his own skin and can talk to all types of people. He seems VERY different than John McDonough to me and I mean that in the best way possible.

Right now he is the interim President and in charge of the search committee for the next guy. He will effectively be rebuilding or reshaping the organization. Now, I want to reiterate that I know ABSOLUTELY nothing at this point. Can't stress that enough. With that said...here is my new org chart that I scribbled down because I refuse to open excel as a blogger 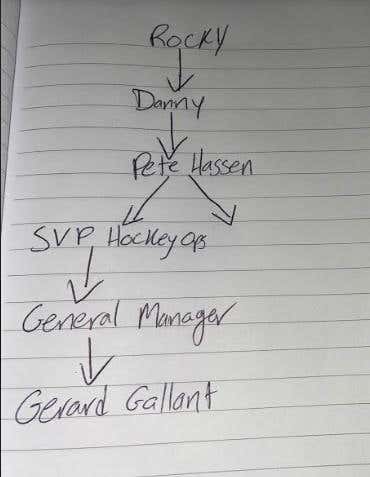 Let's start at the top

Rocky Wirtz: The Chairman. His title remains unchanged as does his legacy. He, to me, is the reason the Hawks were able to become a world class organization of the last decade+. His check book and willingness. Now, I don't know how involved he is now or how involved he was as the Blackhawks became basically a US Mint printing money. I have heard that he is pretty hands off and very loyal. He might step his level of involvement or continue to be a guiding hand, a sounding board, and figure head. I really don't know

Danny Wirtz: Danny has a pretty big role in the family business running the day-to-day of Breakthru Beverage. A liquor distribution GIANT that does over $10 BILLION in sales. I do think it is possible that Danny Wirtz just removes the "interim" tag and assumes the role team President, but walking away from the Beverage side entirely seems unlikely. The Hawks are valued by Forbes at just over $1B. The Hawks might be more glamorous and public than the Beverage industry, but it's not a "bigger" job than the one he has now. Or at least that is how it seems. If he does step into a full-time role with the Blackhawks he would have to hire someone to run the rest of the family business and that too would be a very difficult task. My guess is that when this all shakes out Danny will be named CEO of the Blackhawks and the Presidency will go to...

Pete Hassen: Hassen has been with the Blackhawks FOREVER. Seriously forever. Like since 2004. He is the Vice Presient of Marketing which means that he reported to John McDonough for the last however many years, so god bless him. He stayed and he knows where all the bodies are buried. Hassen is respected and liked by everyone I have talked to in the Hawks organization. The players love him. Guys in hockey ops like him. People who report to him love him. Media relations people. Everyone. And...he has worked with Danny Wirtz on the Blackhawks Foundation as well. The Wirtz Family is known for being loyal and appreciating loyalty. More than that though, Pete Hassen is qualified. If they do promote from within I promise you it won't be more of the same. Different guy and different ideas than John McDonough. He would be a capable and respected team President. A guy I would trust to hire the next VP of Hockey Ops

This is where speculation is running wild already. I am going to do the same because, again, I don't know anything. The names you know...

Stan Bowman. I think people know that I don't want Stan to stay. I think he deserves to be fired and is bad for the overall culture of the organization. It'll be hard to win with him at the helm of this thing. Having said that...the draft is likely going to be in 6 weeks. Could the Blackhawks take a page from the Jerry Reinsdorf playbook and "promote" Stan into a role where he stays on board, but doesn't make decisions a la John Paxson and Kenny Williams? I think it is possible. That would allow for some continuity in an uncertain time. Again, I am not in favor of this, but on some level there is logic to that thinking

Eddie Olczyk. I think some people will scoff at this, but they shouldn't. Edzo is loved and respected across the league. He has relationships with everyone at all levels of hockey. We interviewed him at his house November of 2018 and I floated the idea of him getting back involved with hockey and he didn't dismiss it. He said he missed the competition and working with a team, but also acknowledged that he had a GREAT job. And he does. There was one tweet that always stuck with me too...

I don't know anything about this guy Andy Strickland. He is a sports reporter in St Louis but somehow he breaks a good amount of Blackhawks news over the years. It's bizarre since the organization is so tight lipped. I wouldn't be shocked if there was some merit to this. You want to talk about an organization built on character, trust, and loyalty...I think Edzo would be very much aligned with the type of culture Danny and Pete Hassen would institute. Top down good guys.

Other names that have been floated out there include Chris Chelios. Cheli was in the Wings front office and coached USA Hockey before coming back to Chicago to be an ambassador. It was said that he moved back home not really as a career move, but a family move. Maybe he will be given the chance to do both.

The Athletic mentioned Al MacIssac as a possible internal candidate. I would be SHOCKED if that happened. It is my understanding that MacIssac isn't particularly well-liked and that the a good amount of his role was to teach John McDonough what off-sides and icing were and then tell McDonough that McDonough's ideas were good ideas. He was there to keep John happy. Now John isn't there so his role would have to change if he stayed and he no longer has a big advocate. I've been repeatedly told over the years that Norm McIver is probably the best internal candidate, but he doesn't have Stan's ear due to politics and he never kissed McDonough's ass so he was kind of stuck. Maybe now with changes coming he can have an expanded role.

Another internal candidate could be Mark Kelley, who is the current VP of Amateur Scouting. The Blackhawks drafting, goalies aside, has been strong. It's just that once they get to the NHL Stan hasn't been able to properly evaluate them or manage them. Kelley seems like he LOVES being a scout. Again, I don't know him personally, but he could be a guy content to continue with what he's doing. Pure speculation. He is another guy who seems pretty tight with Stan.

Outside of the organization we could see the Hawks go after Bill Zito. The Athletic mentioned him as a possible candidate and they were the second reporter who mentioned him(the other was a private conversation, if you're reading this and want your name included in the blog send me a text). Zito was a pretty big agent before crossing lines and working in the Blue Jackets organization. He was a rising star, reportedly, until his wife got sick and he put his shooting star of a career on the back burner. I don't know much about him.

Finally...Gerard Gallant. The Hawks need a professional coach. They can't waste more time on Colliton's learning curve because he plays ball with Stan Bowman. They need to maximize the end of this golden era. The quickest way back to the playoffs is with the core of Kane, Toews, Keith, and Crawford added to the young nucleous and given direction by a guy who has already won. It honestly feels like Joel Quenneville again. Joel, before he came to Chicago had stints with St Louis and Colorado. He had success in both places, but got flushed out. Gallant took the Florida fucking Panthers to the playoffs and an expansion team to the Stanley Cup Final. Give him the type of resources he would enjoy in Chicago and the Hawks will be back in the playoffs.

It is going to be a FASCINATING stretch here with the Blackhawks. This things could play out in a million different ways, but I do believe that the changes coming will be positive. I am going to try to dig around and find out what I can, but as of now all I am doing is giving speculation and educated guess. 2020 will be better than 2019 though, I know that