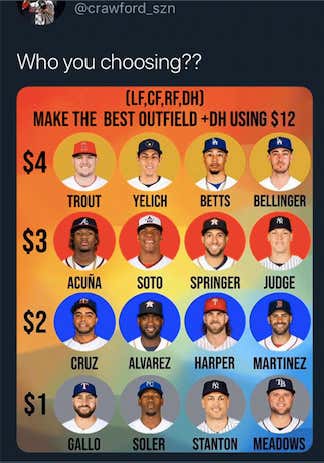 Baseball? $12? Both of these are outside of my realm but still, I #pickem.

It has to be Trout, right? If I don't pick him here, I fear that Bill James (or whoever invented WAR) will break into my home and kill me in my sleep for the disrespect. Of course, it's Trout. He's coming off of another MVP season where he led the league in walks drawn, extra-base hits, on-base percentage, slugging percentage, on-base plus slugging, total bases......and WAR, of course. He really shouldn't cost as much as everyone else if this is going to be fair. He should cost upwards of $9.50 for this exercise.

No value here. Give me the stars. I'm doubling up on MVP's and going with Bellinger as my right fielder. I could put him in CF (as he was projected to play this season) and put Trout in RF, as Bellinger is the superior defender, but why mess with success? I'll let Cody and Mike hash this out. They can both stand in centerfield for all I care, as long as they're hitting 3-4 for me in my lineup. Bellinger led all right fielders in defensive runs saved and took home both the Gold Glove and Fielding Bible awards for his defense last season.

The coolest man on this chart and next year's lock for National League MVP for $3? A steal! My baby boy led the NL in plate appearances, runs scored, stolen bases, gold chains, and dingers pimped. I'm a sucker for a league leader in steals (IT IS A FREE BASE) and I'm willing to live with a couple of times a year where Acuna doesn't get out of the batter's box with knees-to-chest level hustle. Acuna's range isn't great in center field but his arm is a plus so I move him back to LF to complete an outfield trio that should shine at the plate and in the field.

I imagine Soler is $1 here because of his defensive woes in the outfield and how often he strikes out. That's only half of my business here as he'll be my designated hitter. He finished top ten in doubles, homers and slugging percentage in the AL. I minimize his strikeout woes by batting him fifth. Hopefully, he either knocks Acuna/Trout/Bellinger in...or they've already been knocked in and he strikes out with the bases empty. Willing to roll the dice for a buck.