Apparently construction started on this thing in 2018 but I'm just learning about it now and will be acting like this is all new information throughout the blog due to lack of integrity.

Engineers and contractors are building a massive, multi-room clock inside a mountain in West Texas—a clock that will tell time for the next 10,000 years. And despite an informal website with a whiff of Blogspot template, this is a Jeff Bezos project.

There are a lot of surprises in the story of the Clock of the Long Now. It’s the brainchild of Danny Hillis, a computer scientist and entrepreneur who first imagined the 10,000-year clock in 1986. Now, he’s a visiting professor at MIT Media Lab with a reputation for building supercomputers, autonomous dinosaur robots, and Disney theme park rides. He’s exactly the kind of guy who decides he wants to build a huge eon clock in a mountain.

How does the clock work? Well, the longness of the time involved is the big engineering challenge. The clock is designed to tick just once a year and chime once per millennium. Experts are blasting rooms out of the interior of the mountain in order to install steampunky piles of gears and flywheels. According to Bezos, the Amazon founder and richest man on the planet, the clock will be 500 feet tall, "all mechanical, powered by day/night thermal cycles," and "synchronized at solar noon."

Bezos explained the clock as a way to remind people that the far future not only exists, but will happen to their descendants.

Though my feeble mind has trouble understanding even the most basic math, and I think we're supposed to be mad at everything Bezos does… I really love this idea.

It got my mind buzzin'… When the clock's 10,000th year comes around will any humans even be left on Earth or will it be deep inside a mountain ringing for no one? If it's the later, what will be the final year humans go to hear it 'tick' at the stroke of a New Year? Will aliens be hanging out with the humans partying it up in the 10,000 year chamber, or will the aliens be in there celebrating alone while the last remaining humans wither away on their evil prison spaceships? Will my ancestors read about it on the news from their beautiful penthouse floating sky apartments thanks to the generational wealth passed down to them that started with an idea from my incredible brain? Will they be beautiful and intelligent and perfect like me? Will they have statues of me in their foyers and give thanks to me before every holiday meal? It's all a lot to think about.

Here's a bit more info from the official 10,000 Year Clock website, which I recommend checking out if you want to see some cool photos of the project:

If you have an interesting idea for the 10 year anniversary chamber, please feel free to email it to 10-year-chamber@10000yearclock.net, and we'll add it to the mix of ideas. 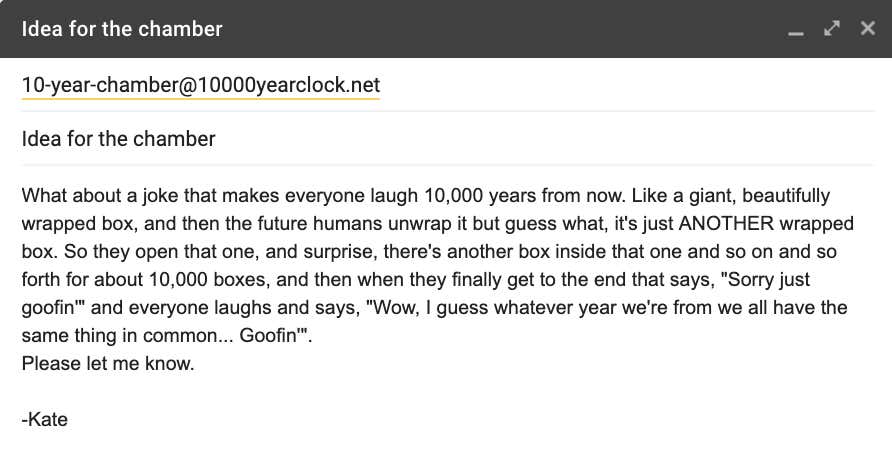 In closing, here's a video of the initial 500 foot holes they drilled into the mountain and it's pretty damn impressive: