In Episode 3 of "The Last Dance", we watched something remarkable. It's 1986 and the Bulls have hired a young coach by the name of Doug Collins. The Bulls pulled a tough draw for their season opener -- on the road at the New York Knicks, a rising power in the East coached by Hubie Brown and with Patrick Ewing at the center of a largely defensive team.

With little time left in the 4th quarter and the game tied, Collins relates that Jordan turned to the overly excited coach and said, "Take a sip, coach, I'm not going to let you lose your first game."

It's a great story and perfectly fitting with the mystique surrounding Jordan; the high flying 23-year-old star saves the new coach's first game single-handedly (Jordan scored 14 points on Chicago's last 11 possessions). But did Jordan really say that to Collins, or is this just modern mythmaking? That can sometimes happen when you're making a 10 part documentary designed to glorify someone's greatness. It's also a cool story and those sometimes get discovered after the fact, if you get my drift

So I did some digging and found a Chicago Tribune story published the day after the game, November 2nd, 1986. 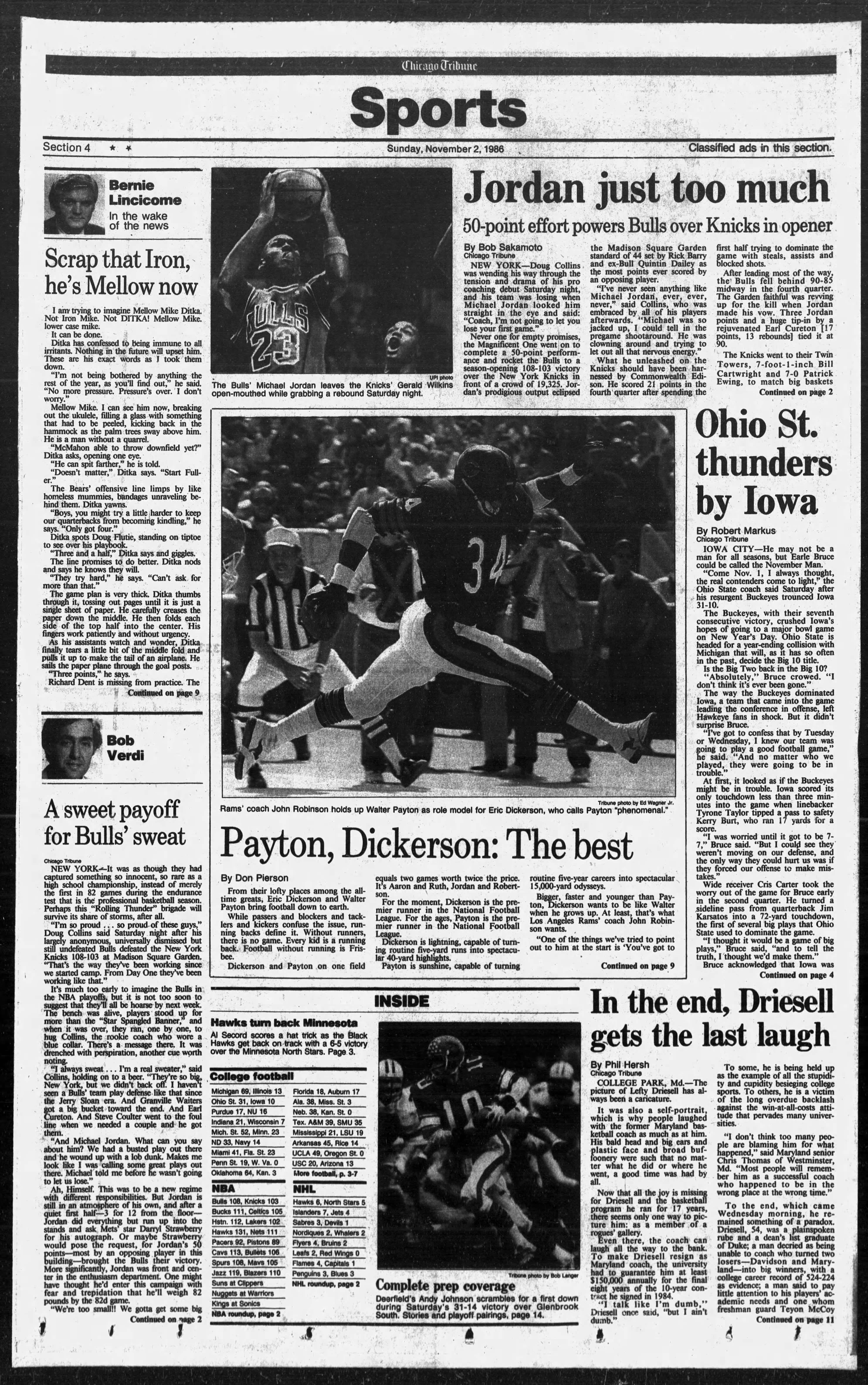 And there it is in black and white.

JORDAN JUST TOO MUCH

Doug Collins was wending through the tension and drama of his pro coaching debut Saturday night, and his team was losing when Michael Jordan looked him straight in the eye and said 'coach I'm not going to let you lose your first game'

Holy shit. Why would we ever doubt MJ???

And as we watched on The Last Dance, we then see what Jordan proceeded to do. Dropped a 50 on the heads of their Eastern Conference rivals to win the game in one of the toughest places to play at that time. An all-time record for a visiting player in Madison Square Garden at that, a record he would famously later break (a story for another day).

Given how iconic this performance was, and how little the documentary dug into it, I wanted to find out more about the preseason hype, the significance of this game, and the aftermath of Jordan's performance.

This is what no NBA and a 10-part Michael Jordan doc is doing to me.

Leading up to the first game of the 1986 season, the Bulls were not seen as a contender in any way. They were 30-52 the year before as Jordan missed over 60 games with a foot injury, and the roster wasn't close to complete. There was major skepticism as to whether MJ was 100% healthy after his foot injury. 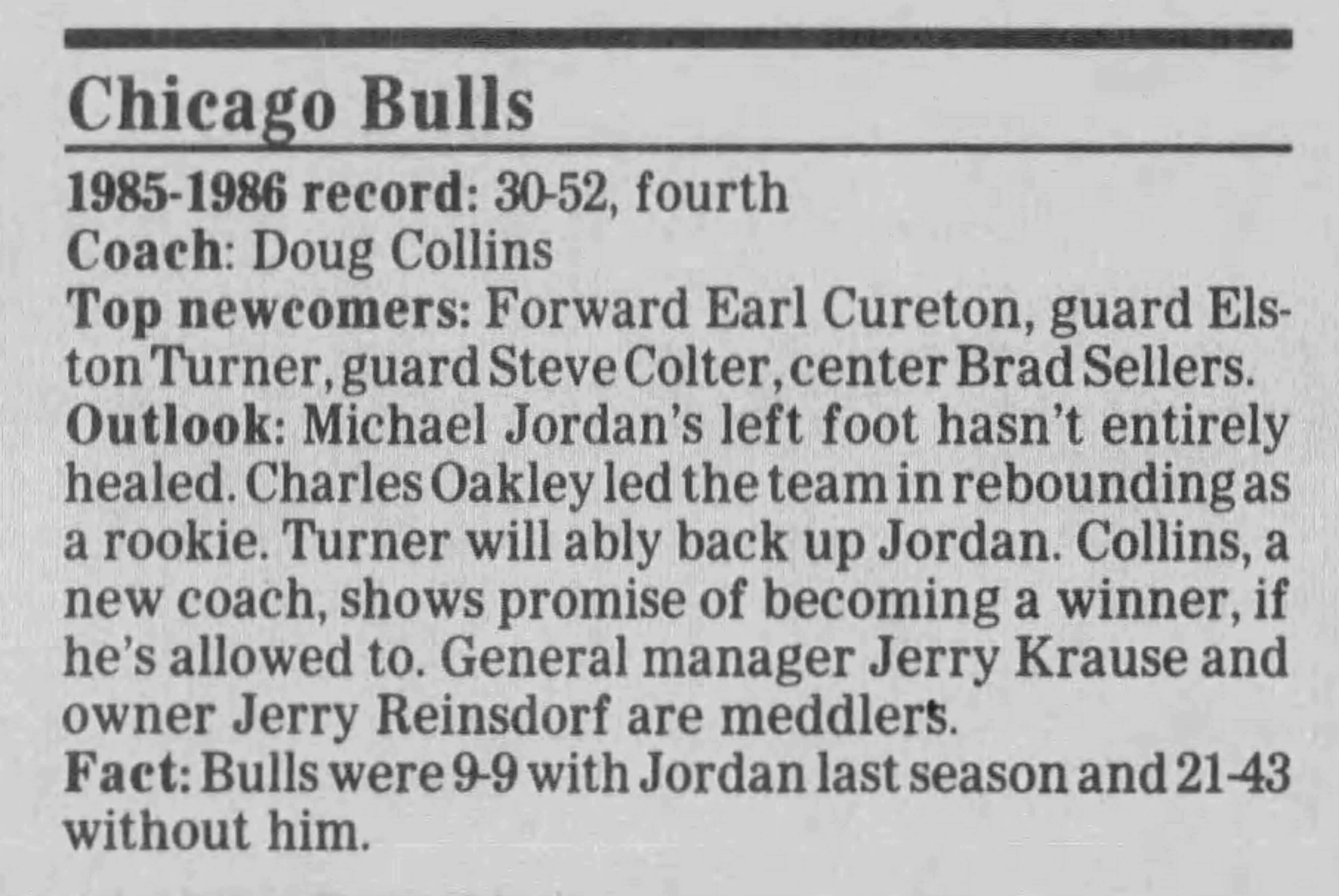 As for the Knicks, they were coming off of a lackluster and injury-plagued season. They were excited about their big men paired with Patrick Ewing in Bill Cartwright and a high flyer in Kenny "Sky" Walker. Hubie Brown, the head coach, thought this team could be special if the frontcourt could just stay healthy. 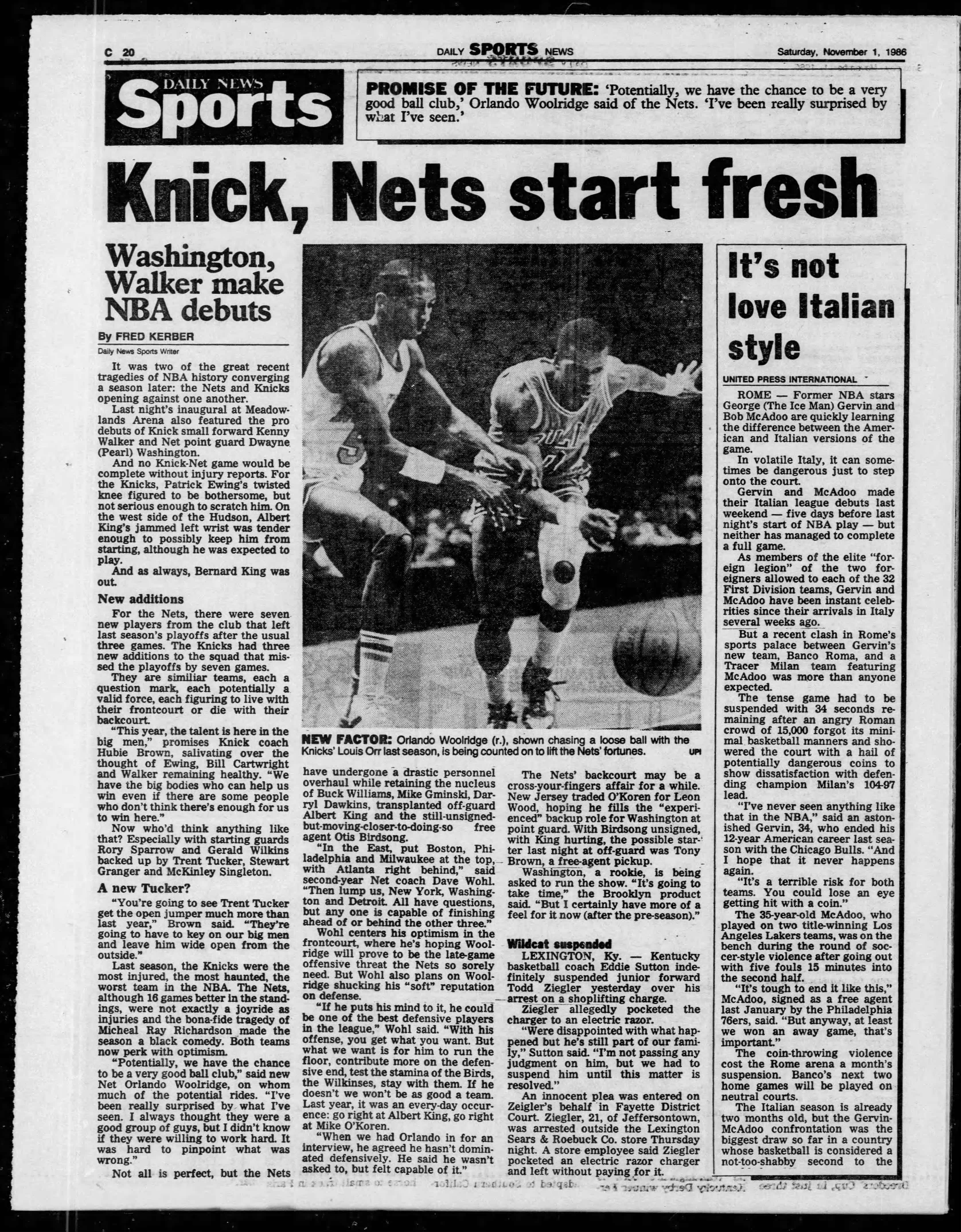 Plus, the Knicks played at the Garden, where they were (LOL) a traditionally tough out.

Even after taking the Celtics to the brink in two playoff games the year before, the way Jordan took over and willed his team to not just win for his new coach, but it showed just how good and just how much better he was than everyone else.

When the game was tight and the Garden was erupting, he let everyone know. He taunted press row with an enthusiasm that showed the new role he would be taking on. He would be more than just a 60 point scorer, his presence and determination would get the best out of his teammates as well.

"'We're too small! We gotta get some big guys in here!' Jordan yelled during a timeout - his fiery way of informing doomsayers that this team though lacking that dominant big man, might measure up anyway."

And this game, the one where Michael set a record for most points ever scored at Madison Square Garden, solidified to his peers and coaches around the league that this dude was something different. This is the kind of guy who can galvanize a locker room and get them (even the coach) to outperform their abilities. It was THIS game as much as any that placed Jordan in the pantheon of Bird and Magic.

After the game, everyone involved made it known. 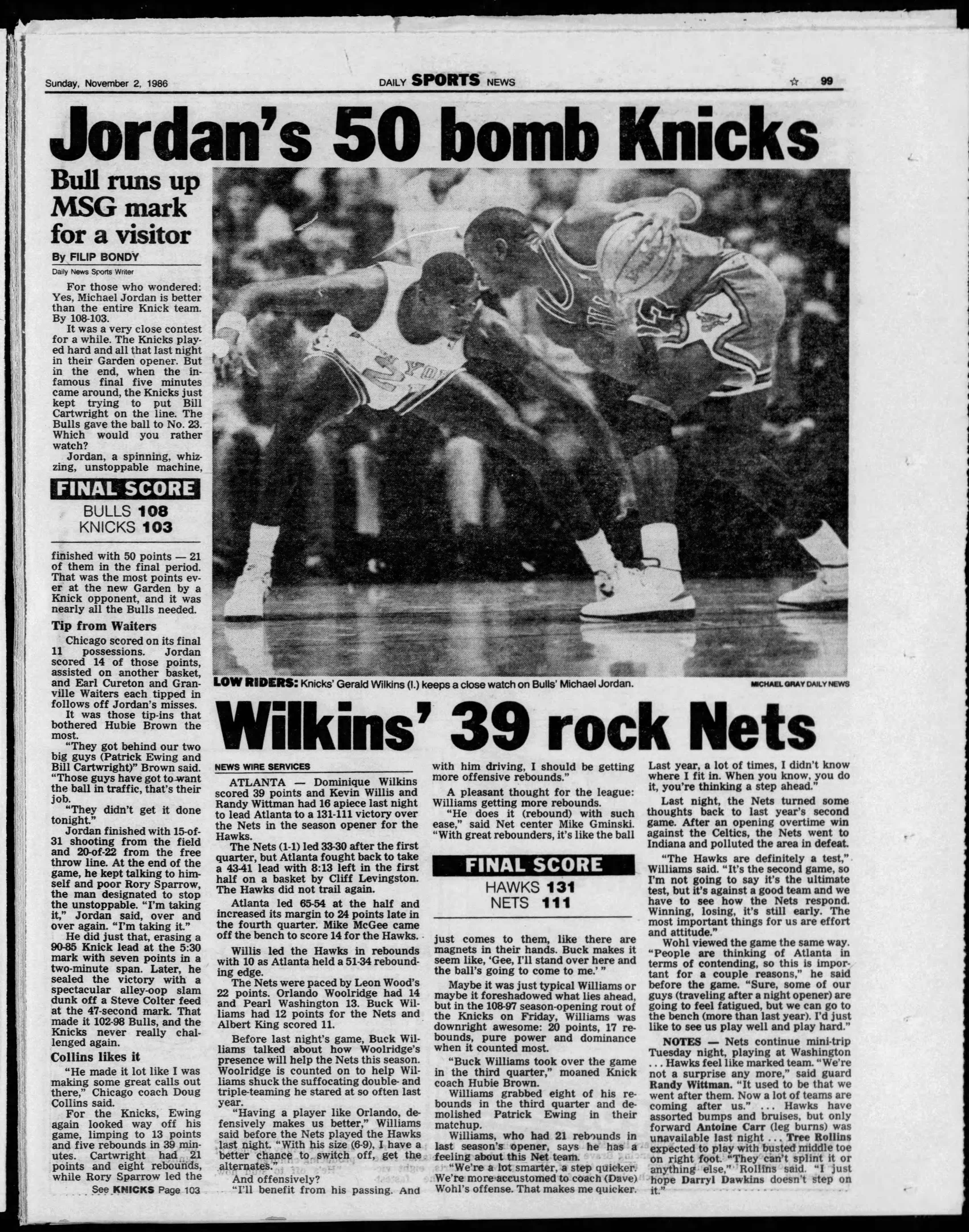 In an article from the Chicago Tribune, Doug Collins and Hubie Brown both pointed this out.

"Michael Jordan. What can you say about him? We had some busted plays out there and he wound up with a lob dunk. Makes me look like I was making some great calls out there. He told me before that he wasn't going to let us lose," said Collins.

"When you have a superstar like him, all you need is the four other guys to work hard and the opportunities will come for him to win the game," Brown noted.

But there was still a little reservation about how good this Bulls team could REALLY be.

The beat reporters covering this game were hesitant to give this team any more credit than they deserved. It wasn't like the Knicks were a good team, and they barely scraped by.

"The Bulls it should be noted did not confront any world champions in these Knicks. The Bulls also missed too many shots and evidenced some hesitancy here and some overzealousness there."

Jeez. Jordan, by the way was 15-31 despite facing constant double teams and shot 20-22 from the stripe.

But it wasn't just the media that was skeptical, even after the win and a historic performance by MJ, their new head coach Doug Collins also had tepid expectations.

"I didn't come in here expecting a bed of roses. If this were a great situation, they wouldn't have changed coaches so often. We're not going to out talent any team in the league. We're not a good club now, but we're better than when we came into camp."

And then something magical happened. Jordan became Jordan. Over the next month he torched the NBA from East to West Coast.

It only took a month for Jordan and his Bulls to significantly outperform expectations. By the end of December, Chicago was a .500 team and Jordan went on a string of "cataclysmic performances that [took] the NBA by firestorm".

At this point, MJ scored 40 points in 9 straight games and 14 out of the first 22, averaging 38pts/game, which was more than any guard in history.

They were on their way even though Jordan knew that contending for a championship wasn't yet on the menu.

"This is my third year and we've made progress, even though it may look small. We're not challenging for the division or even the NBA title. We have to rely on trades and getting surprise players in the draft."

But the rest of the world knew something special had happened. And it would continue happening across the NBA season.

Everyone took notice. A November 30th wire article entitled "Up in the Air: Jordan is Playing on a Level That is the Stuff of Legends," the author declared that although the NBA season was only four weeks old, Jordan had "ever NBA coach, player, referee, executive -- every fan worth his knowledge of an illegal defense -- buzzing about a magical season that is taking shape." 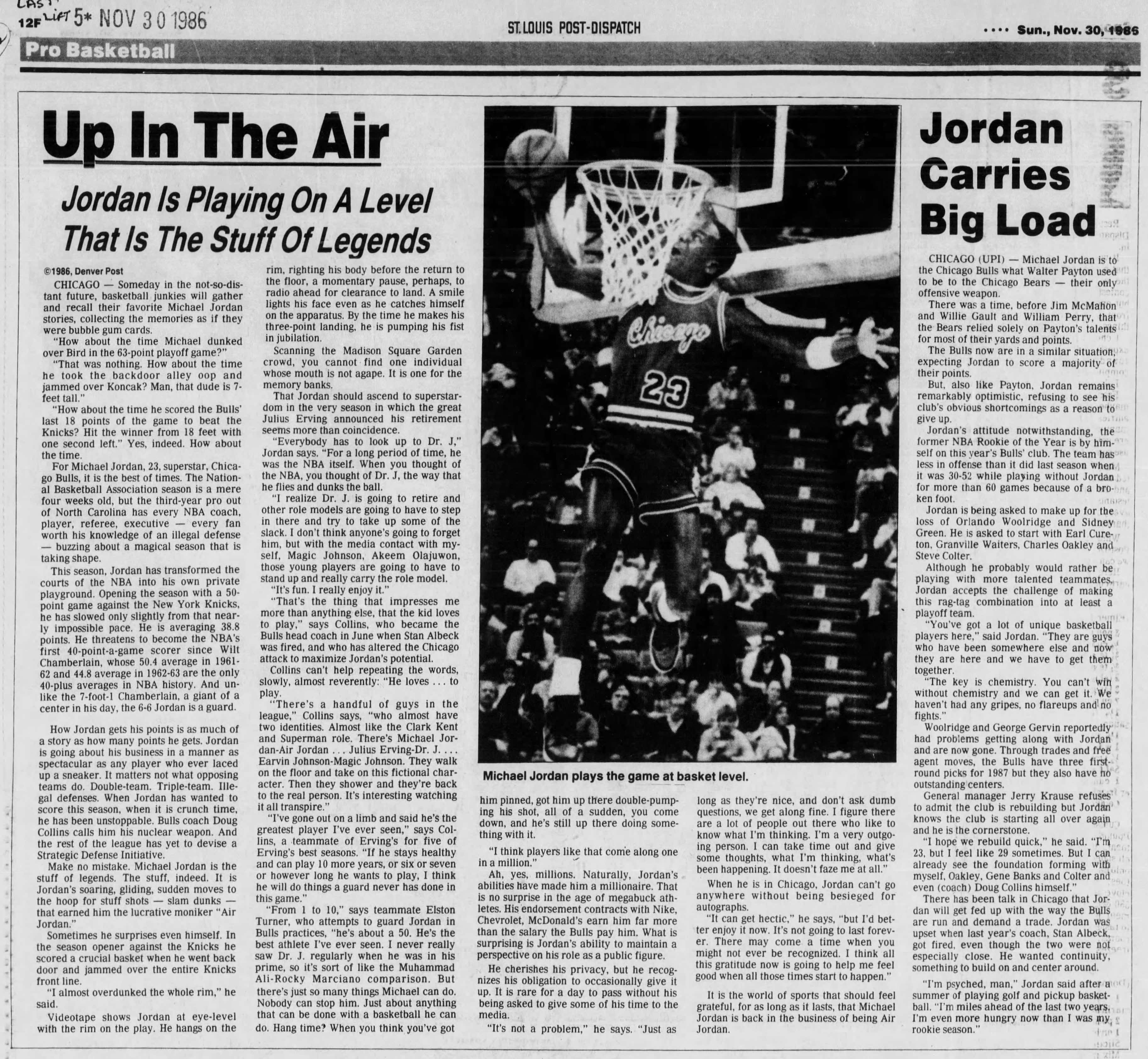 Even Collins had changed his tune. "I've gone out on a limb and said he's the greatest player I've ever seen," Collins told the Denver Post. "If he stays healthy and can play 10 more years ... I think he will do things a guard never has done in this game." Doug Collins, if you recall, played five seasons with Julius Erving IN HIS PRIME.

Keep in mind two other things. First, this was 12 games into the season. And second, Michael Jordan was only 23 years old!

A month after this, the Associated Press ran an article picked up by most major newspapers with the title "Bulls' Collins has a Nuclear Weapon: Jordan's Cataclysmic Performances Have Taken the NBA by Firestorm." In it, the article quoted Collins as saying "It's kind of nice to have a nuclear weapon on your side." The article came as close to saying Jordan was already the greatest guard to ever play as you can without directly saying it. Even rivals like the Celtics Dennis Johnson, one of the great defensive guards in the league, is quoted as saying, "No one guards Michael Jordan." 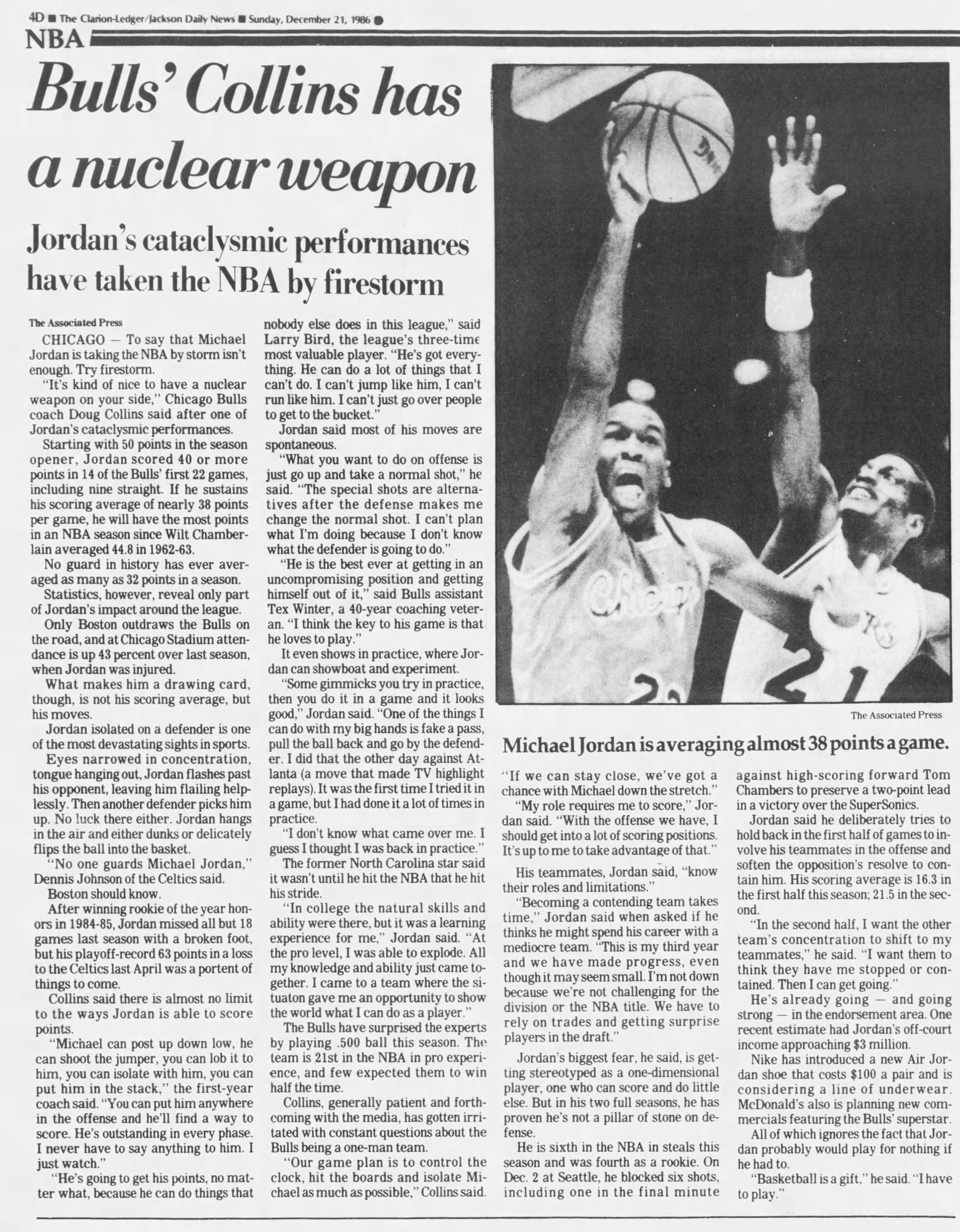 Jordan averaged a surreal 37.1 points per game in Collins' first season as coach, and by the end of the year, his legend was assured. And although he had done heroic things in his rookie year, it's not a stretch to say it was the 1986-1987 season that created the legend of Air Jordan, and the rest, as they say, is history.

And it all began in the Garden with a fifty burger and a promise to a new coach that there was no way he was going to let him lose his debut game.