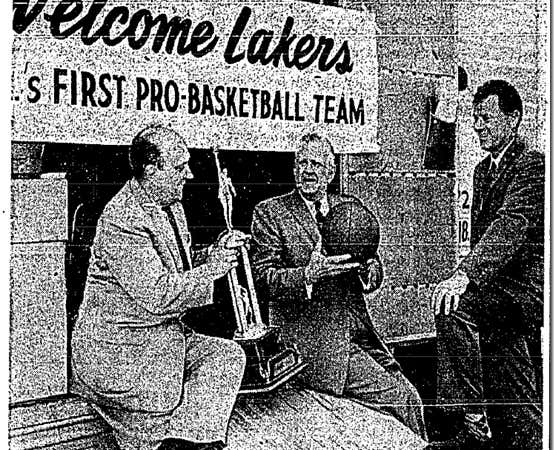 The NBA takes a significant step in its growth as owners approve the Lakers’ move from Minneapolis to Los Angeles. It is the first NBA team on the West Coast. The Lakers had been a success in Minneapolis, winning five championships in six years from 1949-1954. In Los Angeles, that would become one of the NBA’s cornerstone franchises, as they appeared in 24 NBA Finals, winning 11 titles since the move.

As the 1960s were beginning, the NBA was transforming from small towns that made up the NBL to big cities. The Fort Wayne Pistons would become the Detroit Pistons. The Rochester Royals became the Cincinnati Royals, and the Milwaukee Hawks, who started out as the Tri-Cities Blackhawks, became the St. Louis Hawks.

While the Twin Cities were growing in 1960, it was not Los Angeles, and with just eight teams, the NBA had room to grow. The Lakers last season in Minneapolis would be fought with peril as the team survived a scare on January 18th when their flight from St. Louis was forced to make an emergency landing in an Iowa cornfield during a snow storm. The Lakers would finish third in the Western Division with a record of 25-50 and losing to the Detroit Pistons in the playoffs.

Due to low attendance, Lakers owner Bob Short looked to move his team from the Twin Cities to a more significant metropolitan area. After considering Chicago and San Francisco, Short decided to relocate to Los Angeles after viewing the success of the Los Angeles Dodgers in baseball, following their move from Brooklyn in 1958. Despite a dearth of lakes in Los Angeles, Shorth kept the name Lakers to assure its link to the past.

The Lakers would be an immediate success in Los Angeles as they played in the NBA Finals six times in nine years, losing five to the Celtics and once to the New York Knicks in 1970. It would not be until 1972 that the Lakers brought an NBA title to Los Angeles. By then, Bob Short had sold the team to Jack Kent Cooke. The Lakers would become a dynasty in the 1980s, winning five NBA Championships. They would win five more between 2000-2010 and, in 60 years in Los Angeles, have been the NBA’s most consistent franchise.

Two years after the Lakers westward move, they were joined by the Warriors, who left Philadelphia for San Francisco. This led to the Syracuse Nationals becoming the Philadelphia 76ers in 1963, ending the NBA’s small-town existence. The NBA would continue to expand and returned to the twin cities in 1989 with the Minnesota Timberwolves.