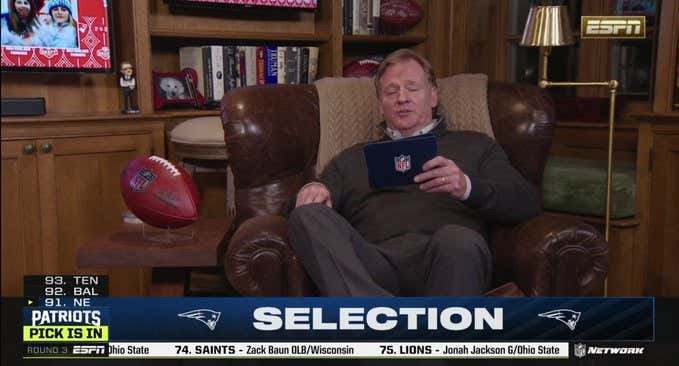 I don't know how the NFL or ESPN will see this blog considering they probably blocked Barstool as a whole following Portnoy's respective wars against them. But we need to extend this draft another 8 rounds this year. Other than draft junkies like Steven Cheah, I imagine most of us have always enjoyed the later rounds when we see our team make a pick, promptly imagine that player drafted after 100+ other people as being at worst a productive starter even if he went to a small school that somehow doesn't have HD highlights in the year 2020, then go about our lives on what is almost a beautiful spring weekend day with whatever NBA/NHL playoff games are going on along with a full slate of baseball.

But this year we need this draft to carry the entire sports world for as long as possible since there are no games FOR-EV-ER (or at least until this shit gets fixed). We need it to have something to root for and to have something we are all watching together until The Last Dance tomorrow night. I'm sure ESPN and the NFL don't give a fuck because their ratings are probably 500% higher since we have nothing to distract us and I'm sure there are some kids with some reeeeeeeally sad life stories that will be take in rounds 8-15. The NFLPA would be fine with it since this would just be a different way to get undrafted players on teams and we could even pick the order of each round after 7 out of a hat to make things fair and because who doesn't love watching draft lotteries (other than me and my fellow Knicks fans)?

The only person on the planet that would be against this would probably be Roger Goodell since I think he may pass out in his leather chair before the 7th round is over. But seeing that son of a bitch having to grind out hours in his musty basement only makes me want to see this happen more and based on everything we've seen during his tenure as commish, if the owners want Goodell to read names off a card until his tongue falls out, he will do it.

Actually I just thought of an even better idea. Tomorrow becomes Day 4 of the draft that is tentatively scheduled for 8 rounds. However, the draft keeps going until The Last Dance begins on ESPN at 9 pm ET. It doesn't matter if it's Round 13 or Round 17. The train does not stop until the opening credits roll on ESPN, which would be awesome because to watch all those GMs trying to get their picks in right before the draft is over like people lining up to get drinks when there is less than 5 minutes left of open bar. Make this happen, NFL. You are truly all we have right now.