Big Cat has been bringing 'the greatest 4 to 8ish minutes in sports' to our quarantined homes & isolated apartments since March 17th. The spectacle grows larger each day with trumpet playing, special guests, Stella appearances, slo-mo cameras and more, and it has drawn in some extremely impressive views for a video with four plastic horses buzzing around or tipping over on an electric, vibrating track.

Speaking of - those four plastic horses are:

Everyone else can rip on the losers, but myself and the rest of Spiral Ham Nation knows that being down & out makes the wins that much sweeter.

Lo and behold, our miracle finally came on Easter Sunday when Spiral Ham had the best race of his life.

Spiral Ham also won on 4/20 dominating the April Holiday Circuit. No one could deny it.. this was a horse with heart, a horse whose great influence was on the rise…

So it was no surprise when our ZBT social media guy Kyle sent me this earlier today: 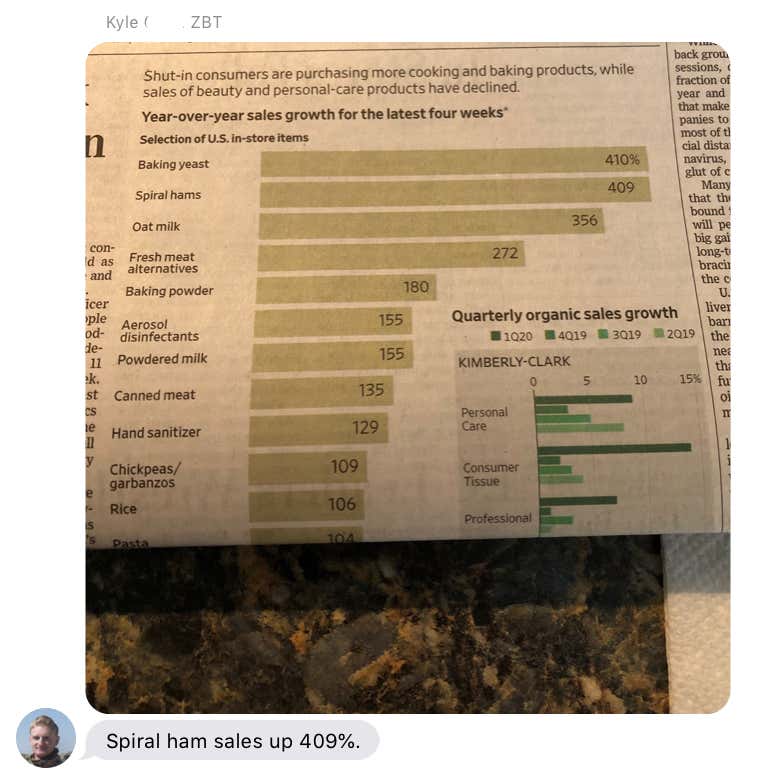 From the Wall Street Journal:

“We underestimated initially the positive impact this would have on our business for at-home cooking,” said Mr. Jope [Unilever CFO].

“Those center-of-the-grocery-store businesses that have been a bit flat for many years, all of those are seeing a rejuvenation. And oh! Especially in the Spiral Ham biz where it's up a whopping 409%. We understand the pastas and soups and people make more stuff like that… but Spiral Ham? And for the first time ever the specialty ham spike began the day AFTER Easter… Absolutely unprecedented. Our numbers folks are still trying to figure out what that's all about but it's got to be some sort of outside influence, like from a sports media company or something."

Ok, maybe I made up a couple sentences at the end of that quote… but you can't deny the Barstool Difference. Cat Cave Derby fans are racing to the Acme to grab up all the Spiral Hams they can get their little Stoolie mitts on. Can't blame 'em.

If you're like me and your fridge is so small you can't fit any ham in your freezer at all, you can always stock up on these instead.

Happy Saturday to all, particularly the rest of Spiral Ham Nation.