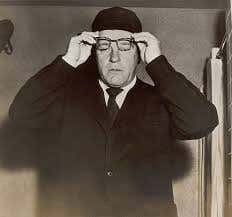 Frank Umont breaks a taboo, becoming the first major league umpire to wear eyeglasses. The 39-year-old is in his third season as an American League umpire. Umont first wears the glasses in a game between the Detroit Tigers and Kansas City Athletics. The Tigers win the game 7-4 at Kansas City Municipal Stadium, but after the game, the talk was about Umont the umpire with glasses, who refused to discuss his eyewear.

Frank Umont was born November 21, 1917, in Staten Island, New York. A natural athlete, he spent five seasons in the NFL with the New York Giants as a Tackle from 1943-1947. After his football career came to an end, Umont went into umpiring, getting his first professional job in the Western Carolina League in 1950. After four years of calling games in the minor leagues, Frank Umont has hired to be an American League Umpire in 1954.

Before the 1956 season, Frank Umont underwent a required eye exam, and it was determined that he needed a slight correction. Umont could see well without the corrective lenses, but glasses gave him perfect vision. For years, players, fans, and managers taunted umpires with the need for glasses when they disagreed with a call, so wearing glasses was a bold move for Frank Umont.

Frank Umont, who still resembled an NFL lineman at 6’1” and 220 pounds, had an imposing presence as an umpire and never saw the big deal with wearing glasses, as several players in baseball wore glasses and were not banned by the league. Thus when the news of his glasses broke, Umont refused to discuss it, not wanting any attention placed on him.

Frank Umont would spend 20 years as an American League Umpire, retiring in 1973. Along the way, he worked four World Series and four All-Star Games, including the 1971 Midsummer Classic in which he was behind home plate at Tiger Stadium. Upon his passing in 1991, Frank Umont’s daughter donated his glasses to the Baseball Hall of Fame in Cooperstown.