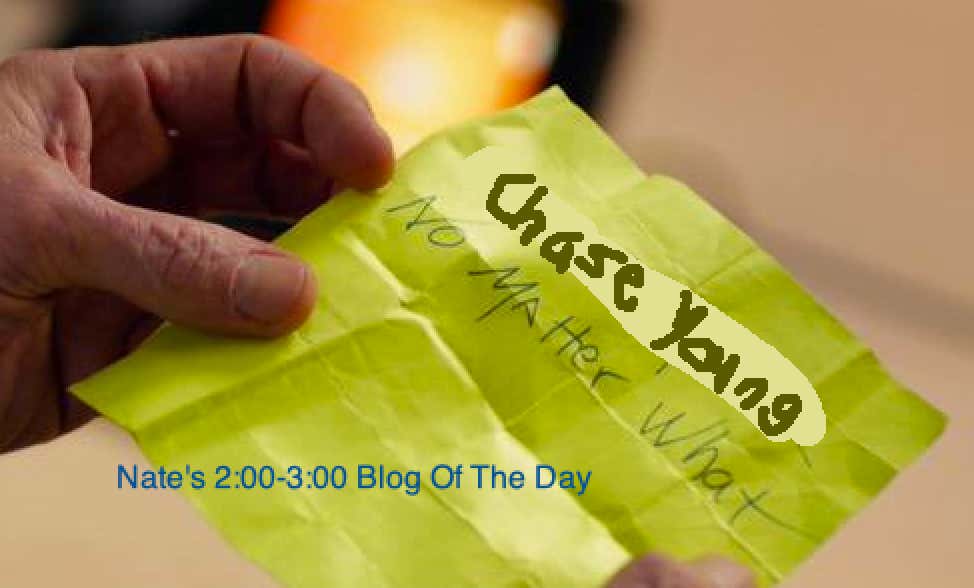 Welcome back to the 2:00 blog. Today is draft day so I thought I'd strap on my "draft expert" helmet and answer some draft questions. The cool thing about this is there is no such thing as a draft expert. There are guys who know a ton about former college football players, but nobody is a draft expert. There's a reason bad players go high and great players fall, because nobody knows as much as they pretend to.

So let me, Nate Kiper Jr, answer some draft questions:

This is a good one. A classic comedy bit. Redskins passing on Chase Young? A natural Bill Cos..errr...Louis C....errr...uhhh...a natural Jeff Dunham ladies and gents! (That dude totally fucks his puppets, right? That's a discussion for another time though.) The Redskins are not passing on Chase Young. Not happening. Not a thing that can happen. I swear to god if they pass on him, I...I don't even know. It's not a thought I wish for my brain to even possess.

I still believe Cleveland is the front runner but there's always the chance they Brown it up and botch the entire deal, but on the other side, always a chance they give WAYYYYYY too much for him. I think we get two 3rds. The price might increase by later today the more other teams get involved, so I'm hoping for a 2nd, but expecting a couple 3rds.

A part of me thinks everything will be fine tonight because computers simply aren't that complicated to use. It's just not really that hard. On the other hand, things like this always somehow seem to get botched.It's always like "the NFL is a multi-billion dollar corporation, how do they still manage to screw this up?". So that is very in play. I'm sure they have safety nets in play too, like if a connection dies the Raiders can just auto-pick the player with the fastest 40, the Patriots can take an undersized WR from Penn, the Bengals can take a murderer who deserves a 3rd chance, etc.

I don't know who Paul Allen is or if any of this is credible, but I was startled by seeing the words "Day-3 pick". I didn't even process what that meant at first. I know it's probably been many more years than it feels, but when the draft was just Saturday and Sunday, those were the good ol' days. Before they wised up and realized that after a month of nonstop draft coverage, we would still watch it for 4 straight days and still act like we know anything about the backup running back from Baylor taken with pick 239 who could be a real steal for the Titans.

Actually a phenomenal question. My minor issue with figuring it out is I can't figure out the current population of NYC because of coronavirus. Usually NYC is about 8 mil or so, but right now I wouldn't be shocked if it's down to 5.5 million or so? I'm speculating because I don't want to cheat and look any of this up. So let's say 6 million, and 3 million are men. Now we need to exclude children because I'm assuming children named Jeff aren't making pancakes. So now are we at 2 million? This is tougher than I thought it'd be. So out of 2 million adult men, how many are named Jeff? That's a hard one. I assume Jeff is a top 50 popular male name. I think it skews white, so we can take out most other nationalities too. Can we say 1/100 white men in NYC are named Jeff? I'm just imagining if you took a random sample of 100 finance bros in NYC and put them in a room, at least 1 will be a Jeff every time. Let's say there are currently 125,000 Jeffs in NYC. Don't ask how I landed on that. Now we need to decide how many made pancakes for breakfast this morning. VERY FEW. We could start trying to figure out why Jeffs would be making pancakes- wife/gf birthdays, protein pancakes because they are trying to stay in shape, or they have city kids who want breakfast. Jeff is a very "dad" name, so that definitely increases the total a little. I'm going to say….23 Jeffs in NYC made pancakes for breakfast this morning. That's my answer.

That's the blog. Let me know what you think about the pancakes question. I think it's a great question. Happy Chase Young day everyone.