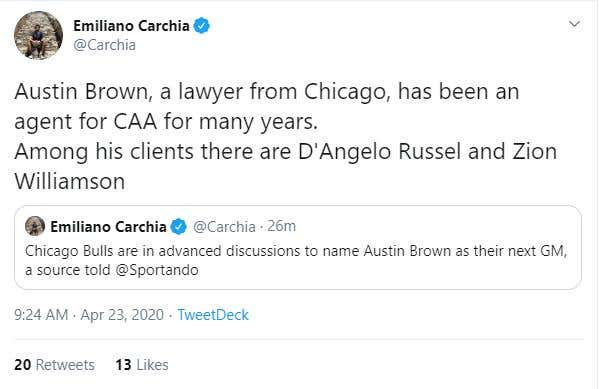 BIG news this morning. It's not from Shams or Woj so I am taking it with a grain of salt, but apparently Austin Brown could be in the mix. A Chicago guy who has become a BIG shot NBA agent since joining CAA in 2013. His resume looks fucking big time. As of 201 negotiated over $2.6 BILLION in free agency deals and his client list is pretty stacked. D'Angelo Russell, Zion Williamson, Gary Harris(so he prob knows AK decently well), and Donovan Mitchell, among others. Pretty decent I would say. Young guy. Bright. Played ball at Depauw.

I can't say I know a ton about him other than what I laid out, but I LOVE the idea of a guy like him teaming up with AK. One guy running the back end, setting up the scouting department and analytics, scouring Europe, then a cool young guy who knows his way around the league and how to attract and negotiate big time free agents...FUCK and YES. The Bulls are doing things that make them seem actually competent for the first time in a LONG time.

Zion to the Bulls? Yes, that is what this means.