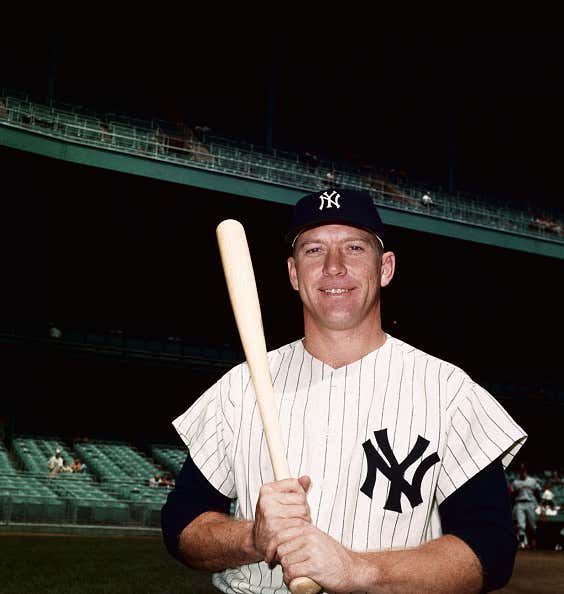 (NY Post)--In a new memoir, Diane Shah — the first female sports columnist for a major daily newspaper and longtime sports reporter — recalls sitting down with the Yankee legend in 1970 while he was a first-base coach for the team.

Shah writes in “A Farewell to Arms, Legs, and Jockstraps: A Sportswriter’s Memoir” that she asked Mantle how long he had been married. “Too long,” he answered.

“Then he reached inside his jacket and pulled out a greeting card. He handed it to me. The front showed a picture of flowers, and I assumed this was a card he intended to give his wife. I opened it. Inside, it said, ‘Wanna f - - k?’ He grinned.”

Mickey Fucking Mantle. My god. In case you didn't read the blurb or click on the link, this story is from 1970 in a memoir by the first female sports reporter. COMPLETELY inappropriate. You can't just go around handing women pieces of paper in a work environment asking them if they wanna fuck. Can't do it. Not going to defend that.

Having said that...the reality of the situation is that Mickey Mantle had never seen a woman in a working environment before. I am surprised he handed her a greeting card with a question instead of just his dick in a box. I would also guess that this was a pretty regular move by Mantle. He was king of the world in the 1950s and 60s in New York when, according to Mad Men, women were not treated very well. I bet he did the ole "wanna fuck?' note game quite a bit as the most famous athlete in NYC and I bet it worked A LOT. The incident with the reporter was probably half hazing, but also...his a regular move to just take the pulse of the women that caught his eye. "I'm the Mick, wanna fuck?" probably went a long way in the 60s with the "free love" movement combined with treating women like second class citizens. Two blue eyes, three MVPs, and 7 World Series rings probably gave Mickey Mantle the confidence to be a supreme asshole and he likely got a lot of positive feedback. With that said, he's been dead for nearly 25 years and I feel like he is about to be canceled.