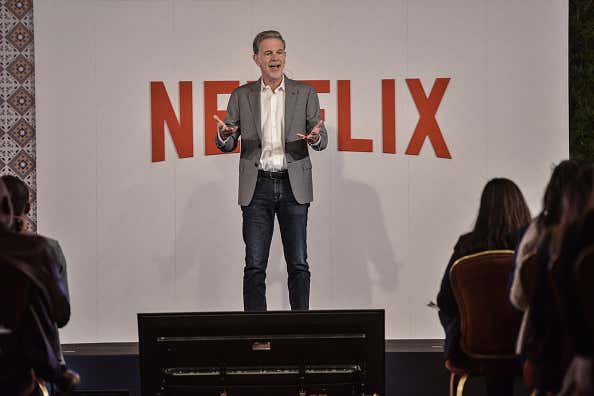 Netflix founder and Chief Executive Reed Hastings saw his compensation jump 7 percent to $38.6 million last year, versus pay of $36.1 million in 2018, according to a regulatory filing Wednesday.

Hastings’ No. 2 Ted Sarandos, the company’s chief content officer, got a 17-percent bump in compensation, amounting to $34.7 million. That compared with $29.6 million, a year earlier.

Hastings’ salary remained unchanged at $700,000 with the majority of his compensation increase coming from stock options awards, which amounted to $37.4 million, up from $35.4 million in 2018. The CEO’s “other compensation” totaled $465,637, up from zero.

God DAMN! Get paid, Reed. That's Mike Trout money, and it's safe to say that maybe the only person on the planet who has had a better run lately than Trout is Reed Hastings. Netflix went from being a delivery service of library DVDs to a cultural phenomenon. I was watching the documentary on Youtube called "Out Of The Shadows" and they had a line in there that said the only thing we consume more than content is air. I have no idea if that is true, but it feels true and Netflix is at the forefront of that. AND Reed Hastings has kept Netlfix in good standing from a PR stand point. Streaming accounts for at least 1% of global emissions and 60% of all internet usage, but you don't hear little Greta screaming about Netflix being bad. Big providers wanted Netflix and streaming services to start paying for use of their broadband services...Reed's response

And now with this global pandemic hitting there's one company better positioned to dominate than anyone and it's Netflix. Q1 saw Netflix have an increase of 16 million subscribers. Decent quarter, I'd say. And that will just be added to the 64 million households that watched Tiger King. I know people get all bent out of shape about CEO compensation, and I don't know what Reed Hastings does day to day, but it feels like he's worth. Enjoy that cash, King.