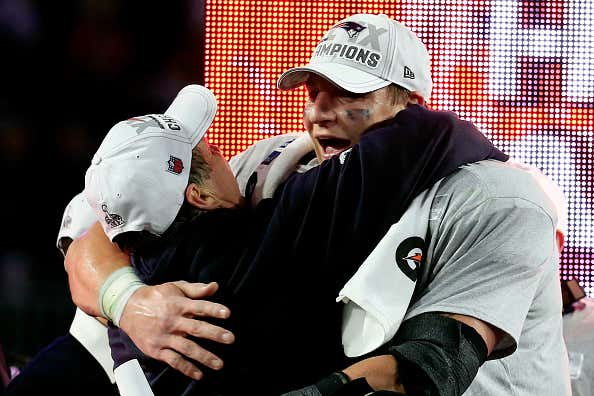 This isn't easy. I'm not going to pretend it's easy. Today feels like finding out two friends who met through you have been going to clubs together with some other friend of theirs without calling you. And shit like this doesn't help:

Those used to be our shenanigans. those laughs were intended for us. For me, personally. For the people who pack Gillette in blizzards and the tens of thousands who take seats under the blistering sun of camp practices and the 1.2 million who came out to a parade on a Tuesday in February. Now Brady and Gronk are doing it for the amusement of some fanbase of transients and old, transplanted snowbirds from the Northeast who haven't even bought as many Brady Buccaneers jerseys as the state of Rhode Island. And you're goddamned right it bothers me.

But I'm starting to come around on the situation. I'm realizing it's all a matter of how you look at it. You can focus on the cold, hard truth that Rob Gronkowski would rather take flying elbows in an empty wrestling arena than ever step on a practice field with Bill Belichick. Or you can look at how his decision to unretire handed Belichick the gift of a mid-round draft pick for the low, low price of nothing.

I won't put too much stock in what Drew Rosenhaus says. He didn't get to be the most powerful agent in the sport through speaking the honest, objective, dispassionate truth. He advocates for his client. He wants everyone to like him, be happy with his life choices and keep buying his line of cannabis oil products. That's the job. But just because it comes from Gronk's own paid spokesman doesn't mean it's not true.

We can debate the return Belichick got for Gronk. Whether he could've held out for more or whether he would've gotten it if he tried. But what's not debatable is that he got something for nothing. From Mike Reiss:

It was Tampa or nothing.

So the Patriots weren't dealing from a position of strength when it came to trade compensation. Landing a fourth-round pick, albeit late in the round, is better than the alternative -- which would have been nothing.

The Patriots also faced a salary-cap crunch (they have about $1 million in space) that would have had to be addressed if they wanted to play hardball with Gronkowski and the Buccaneers in hopes of upping the compensation. In that scenario, they would have had to initially bring Gronkowski back on to their roster, which would mean clearing about $9 million in cap space.

Instead, they trade him directly off the reserve/retired list. No impact on the cap one way or the other.

There's a concept in business known as a "Sunk Cost," essentially something you've invested in that is never going to get you a return. Think of the oil that the petroleum companies are paying people $40 a barrel for just to take them off their hands. Gronk was, for all intents and purposes, a sunk cost. Not in so much as they had to pay him him the $10 million if he stayed retired. But in that, in order to get any use out of that year remaining on his contract was to play him, which wasn't going to happen, or trade him. Which just did.

I get where Gronk is coming from. Belichick is tough to play for. Being a New England Patriot is not for everyone. The list of established players who came here, got a taste of it and decided to bail is, like Slider's johnson, long and distinguished. Reggie Wayne noped out of there after just a few practices, calling it "too tough." More recently, Michael Bennett got into it with a coach last season and begged out midseason. Gronk is in that phase of his career where he's sacrificed enough and achieved enough and now he just wants to have the kind of hilarious, carefree fun with his bestie that in Foxboro is considered not conducive to winning.

I can live with that.

And if a fourth round pick is the best they could've gotten for him, I can live with that too. It's not they were going to be able to trade WWE 24/7 Title Belt holder Rob Gronkowski for a pick. Nor were they going to dump $9 million in salary for a guy Belichick tried to trade to Detroit two years ago. So they got the 139th pick (Note: yesterday I was under the impression it was 113; I stand corrected). In that part of the draft where in recent years we've seen such hits as Marcus Cannon, Anthony Sherman, Josh Norman, Malik Jackson, Kenny Stills, James White, Shaq Mason and Dak Prescott, just to name a few.

That's no guarantee of success. But it's a chance. And retired WWE/CBD Gronk gave us none.