NY POST  — Mayor Bill de Blasio’s critics let him know how they really felt about him ordering New Yorkers to snitch on each other for violating social-distancing rules — by flooding his new tip line with crank complaints including “dick pics” and people flipping the bird, The Post has learned.

Photos of extended middle fingers, the mayor dropping the Staten Island groundhog and news coverage of him going to the gym have all been texted to a special tip line that de Blasio announced Saturday, according to screenshots posted on Twitter.

I realize the whole world doesn't revolve around New York so just FYI: Bill de Blasio is the Mayor of NYC. That's him above, announcing his Social Distancing Tip Program... aka The Snitch Hotline, aka "The New Squeal": if you see a stranger on the street not social distancing, you can snipe a picture and text a 311 number to rat them out for a possible $1K fine.

We'll get to how that turned out in a second (it's already been spoiled if you read the headline I guess - not well!) But first some quick background:

de Blasio is overwhelmingly hated by everyone in the city — both parties, does NOT matter political affiliation, I've actually never seen anything like it, someone so equally hated by every single person — just insanely unpopular, but equally un-self-aware, to the point he actually ran for President this election but after polling at zero...like, almost literally zero, 0...he dropped out.

His Presidential campaign was sneaky one of the funniest things to happen in 2019. I mean aside from what I just said above? My dude de Blasio raised $1.1 million for his "campaign," which in politics is the equivalent of like 1 Sacajawea coin, and like 99% of it came from one single union...that had upcoming business with him and needed to be on his good side.  Buttigieg raised double that in one fundraising round in NYC. I mean I really can't overstate how fucking ridiculous this Presidential "run" was — one time he gave a speech in New Hampshire and 20 people showed up. 14 were on the panel for the speech. 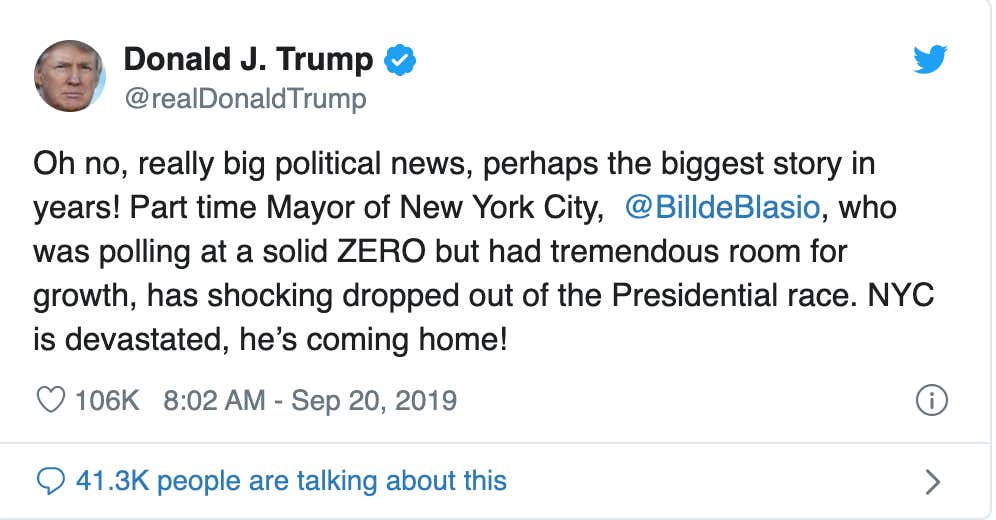 I mean the only thing "less than" my knowledge of politics is the amount of times I blog about politics. This isn't politics at this point. de Blasio has pulled off the rare feat of making it accepted, general knowledge that he stinks. Like there are very few things more bipartisan than dude being a total dickwad.

He doesn't just stink at self-awareness — seriously, have you fully processed how IMPOSSIBLY LOW your self-awareness has to be to run for President and get literally ZERO support?

He stinks at knowing what the people of his city want and what he can do to help them.

That is why he thought a Snitch Line would do really really well, and that is why it was immediately shut down because of dick pics and fucking Hitler.

One user sent the message “We will fight this tyrannical overreach!” to the service and got an automated message that in part said, “Hello, and thank you for texting NYC311.”

“F–k you!” replied @MorganLSchmidt1, along with a meme showing Adolf Hitler and the words “TO THOSE TURNING IN YOUR NEIGHBORS AND LOCAL BUSINESSES — YOU DID THE REICH THING.”

“Start flooding their reporting text numbers with this pics!” the tweet added.

Other profane messages included a photo of a bowl of gummy candies in the shape of male genitalia and a sign saying “EAT A BAG OF D–KS.” 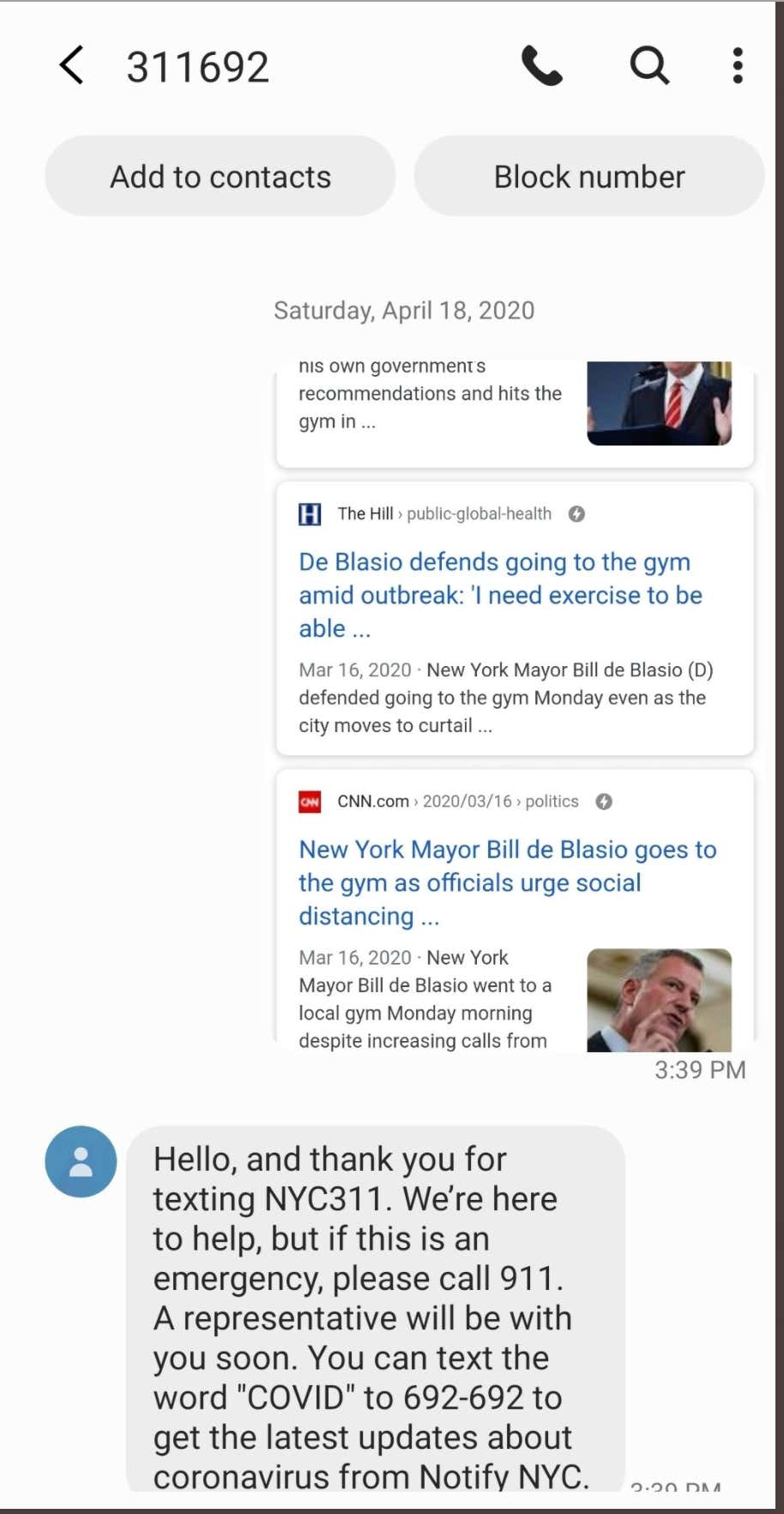 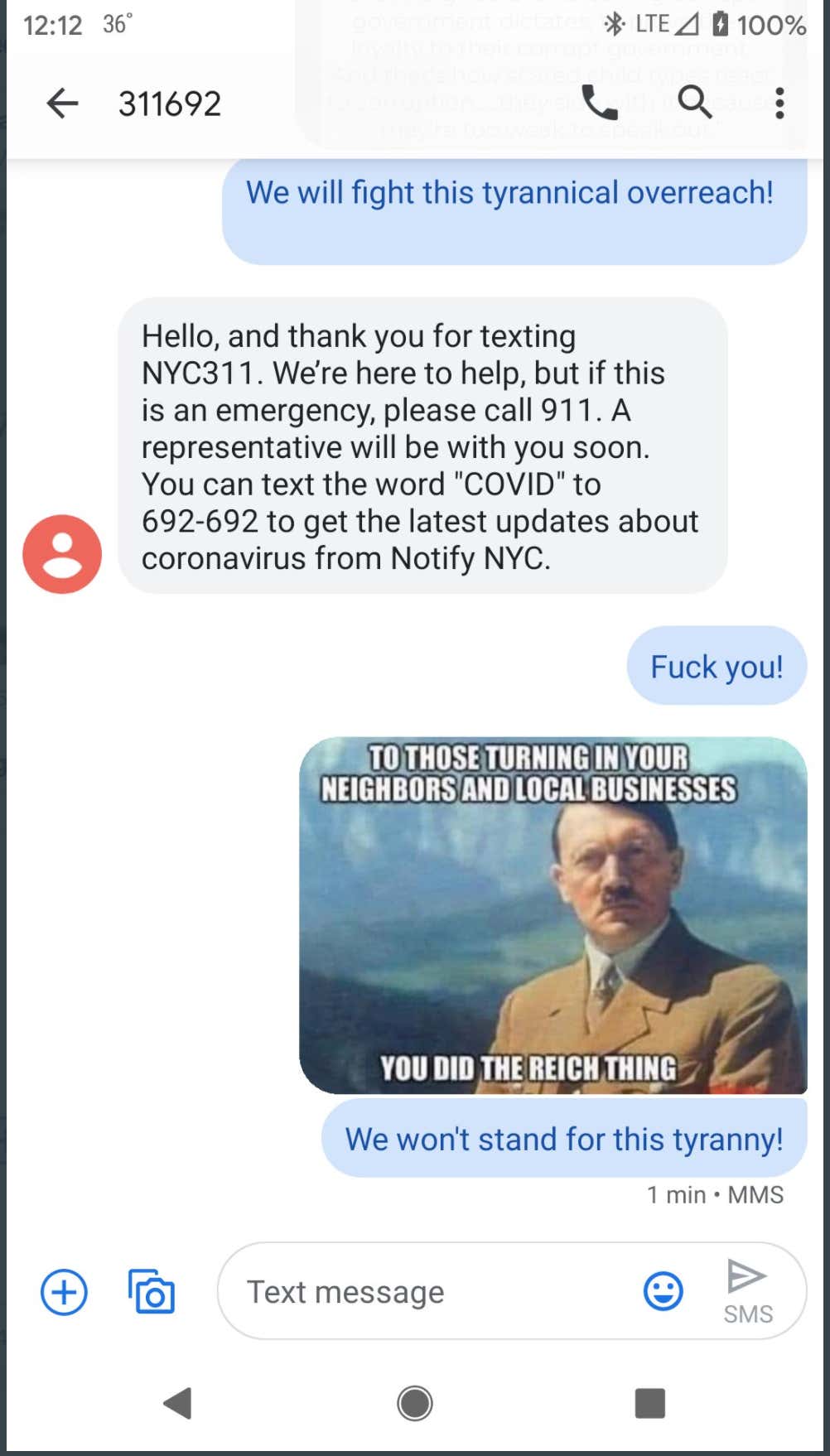 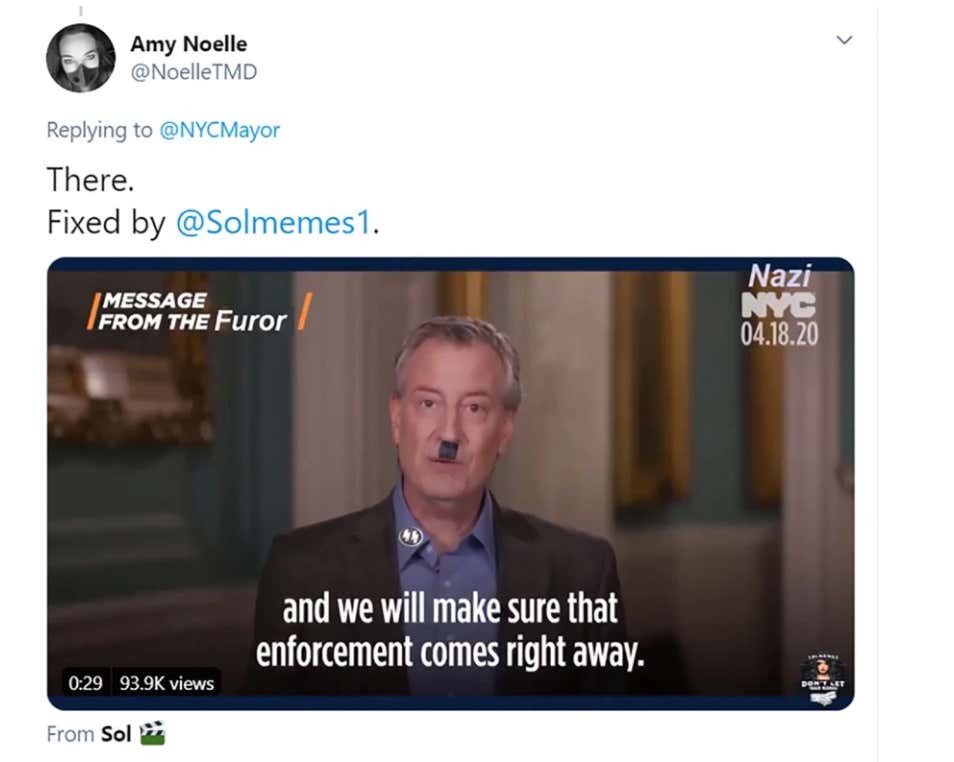 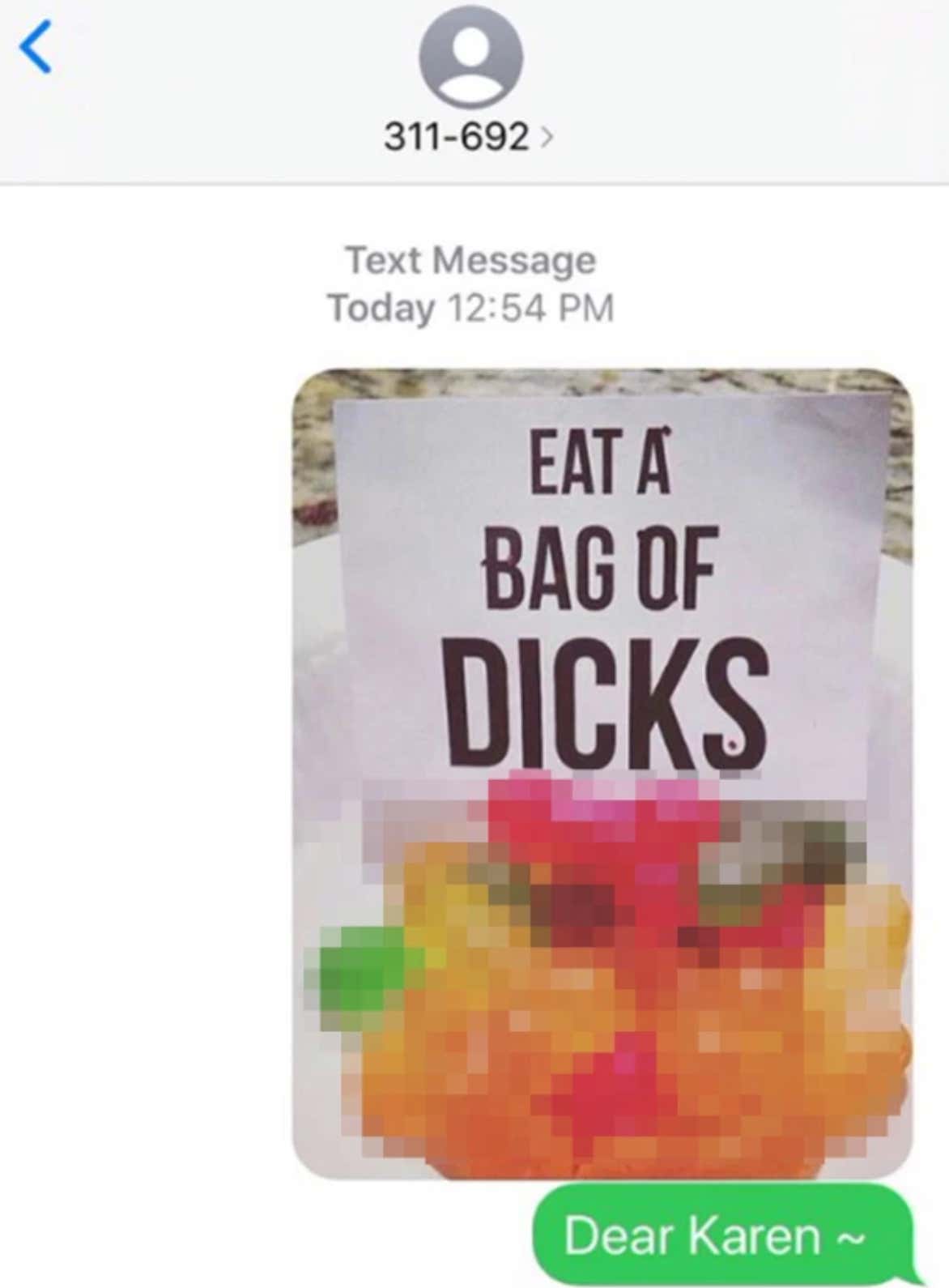 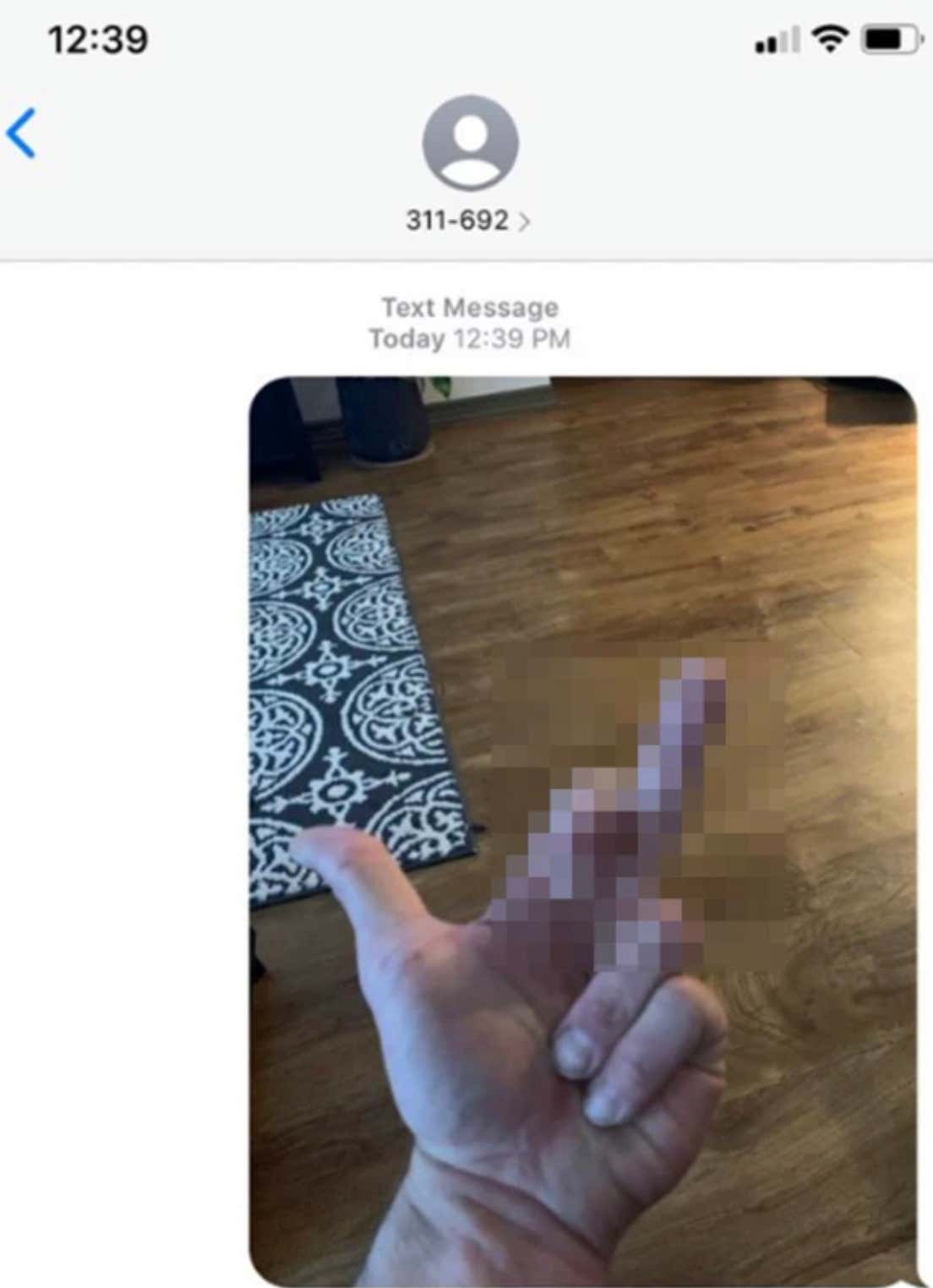 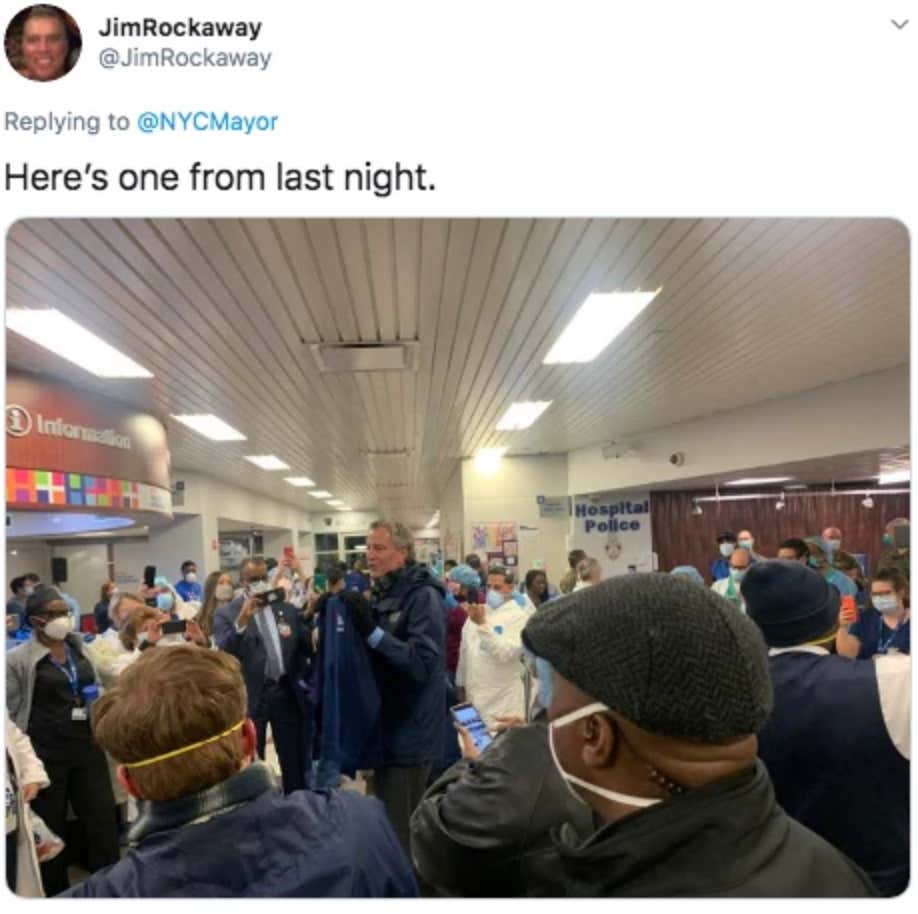 At first, authorities worried this was would cause fights in the streets:

“Maybe he should be figuring out why he didn’t have enough PPEs for cops and EMS workers,” the ex-sarge said of the mayor.

“I’d rather yell at them,” said out-of-work waiter Edwin Mendoza. “If you take a picture, that could cause a scene … People can hurt you.”

No reports on that so far — plenty of reports of big, veiny triumphant bastards popping up on Bill's flip phone.

Nobody knows the importance of distancing more than New Yorkers, and I can promise you there are plenty of verbal confrontations going down every day on the streets and in the parks. But setting up an actual RatLine and encouraging people to snitch? A man's got to have a code!

You should social distance though. Please.