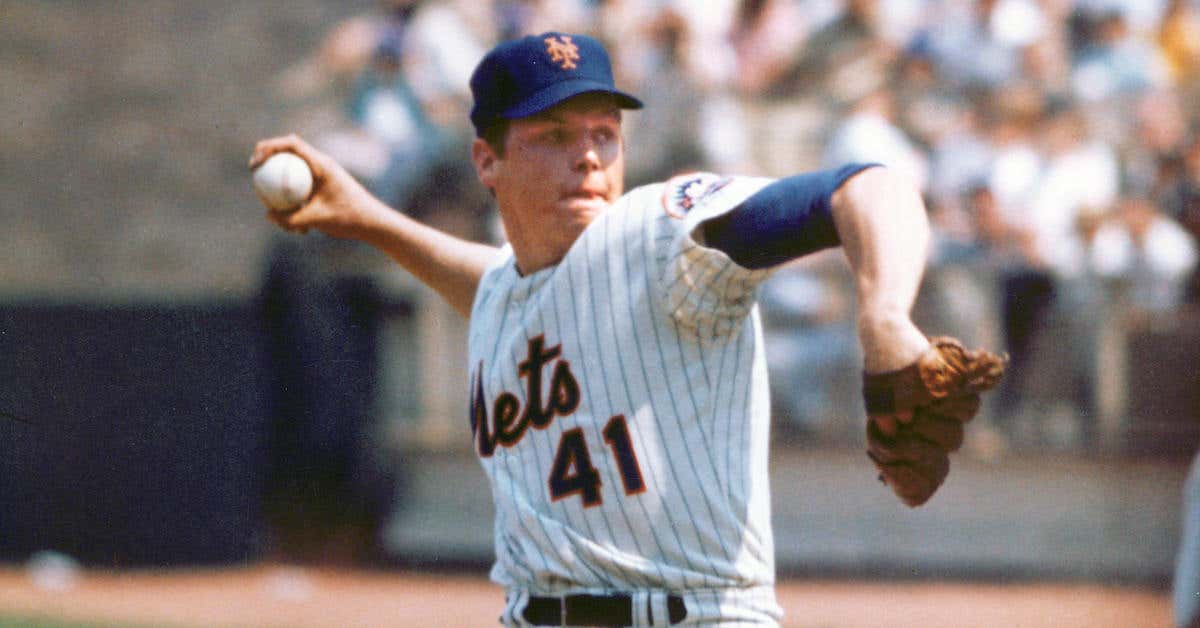 On the first Earth Day, Tom Seaver of the New York Mets delivers an out of the world performance striking out 19 batters, in a 2-1 win over the San Diego Padres, with 14,197 fans on hand at Shea Stadium. Tom Terrific finishes the game with a flourish as the last ten Padres go down on strikes. At the time, the 19 strikeouts equaled a single-game record.

George Thomas Seaver was born on November 17, 1945, in Fresno, California. When he made his major league debut with the New York Mets, it marked a turning point from the franchise. A laughing stock for their first five seasons, the Mets had their first star as Tom Seaver became the franchise. Winning the Rookie of the Year with a record of 16-13 and a 2.76 ERA in 1967. Two years later, he won the Cy Young and went 25-7 with a 2.21 ERA as the Miracle Mets won the World Series.

Looking to follow up the 1969 World Championship, the Mets managed by Gil Hodges had a record of 6-6 as they completed their first homestand with a game against the Padres. Seaver had won his first two decisions after the Mets won 5-3 on opening day in Pittsburgh in 11 innings. The Padres meanwhile stood at 6-8 for manager Preston Gomez, after losing 110 games in their 1969 expansion season.

Mike Corkins at 0-1 made the start for San Diego against Tom Seaver and the Mets. It was a getaway afternoon game on Wednesday as the Mets prepared to go on a West Coast road trip. Tom Seaver began the game with two strikeouts in the first inning as Van Kelly and Cito Gaston were the first two batters fanned. The Mets scored the game’s first run in the first inning as Ken Boswell doubled home, Bud Harrelson. San Diego would tie the game as Al Ferrara led off the second with a home run. Tom Seaver retired the next three batters, including a strikeout of Jerry Morales to end the inning.

After Van Kelly was the Padres' fourth strikeout victim, the Mets regained the lead in the third inning with a triple by Harrelson, scoring Tommie Agee. In the fourth inning, Dave Campbell registered the Padres’ second hit, while Seaver added two more strikeouts. Seaver also issued his second and final walk in the fourth inning. Seaver would retire the finals 16 batters, including an additional two strikeouts in the fifth inning to reach eight in the game.

Leading 2-1 in the sixth inning, Van Kelly popped up to catcher Jerry Grote. Cito Gaston flew out to right fielder Art Shamsky for the second out. It was the last contact the Padres would make as Al Ferrera struck out to end the sixth. The next nine Padres would go down in the same fashion as Ferrera made the final out in a 2-1 win for the Mets.

The only other 19-strikeout games were pitched by David Cone of the Mets in 1991 in the final game of the season against the Philadelphia Phillies, while Randy Johnson of the Seattle Mariners had a pair of 19-K games in 1997 against the Oakland Athletics and Chicago White Sox.