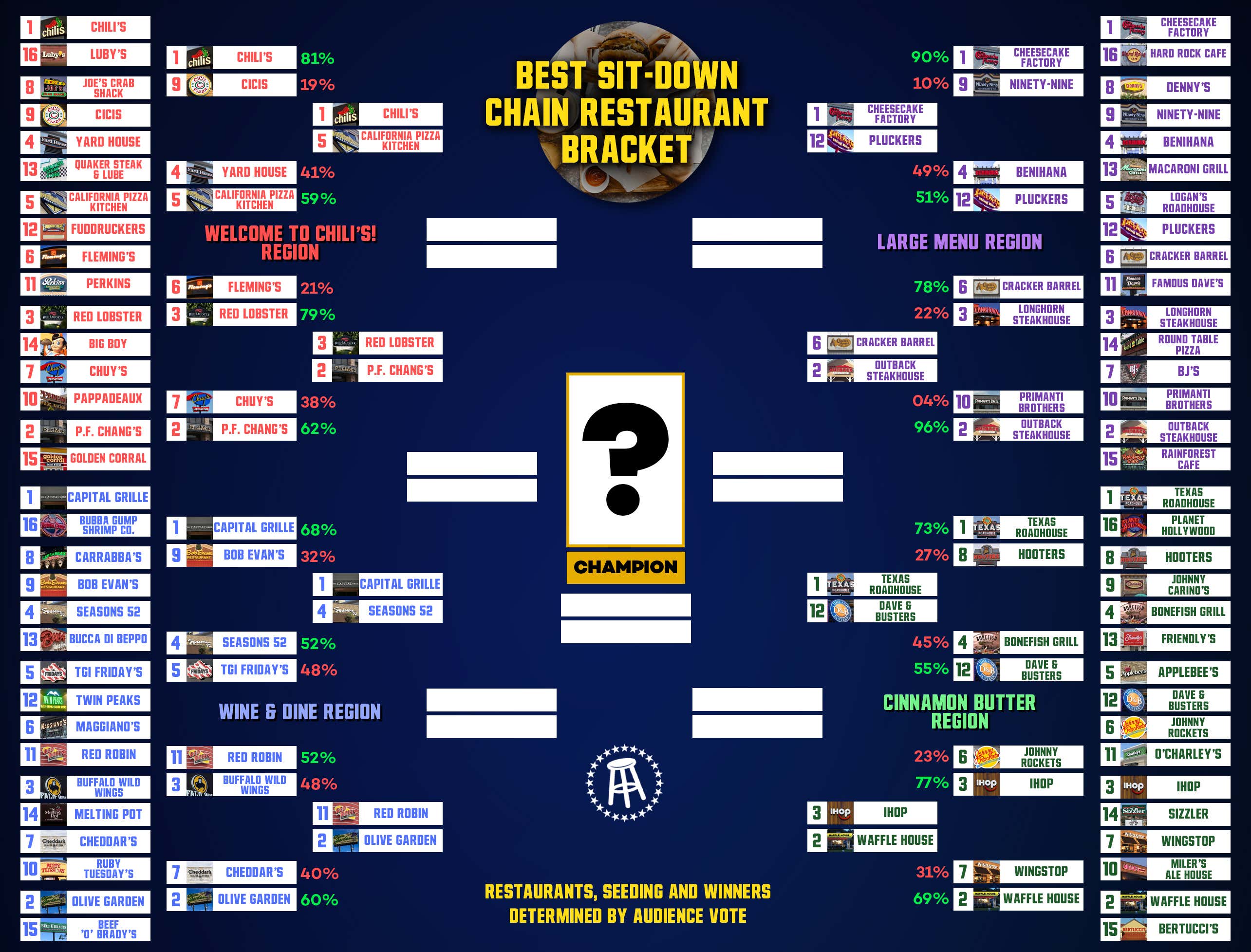 I know, I know. This took a while.

Restaurants were pushing the vote and I got greedy, I want the vote to keep rising, so I let it stay open for a while.

No more, the bracket will end on MONDAY.

We had a few hundred thousand votes again. People are passionate about their chains, especially more localized ones. A few rules reminders... 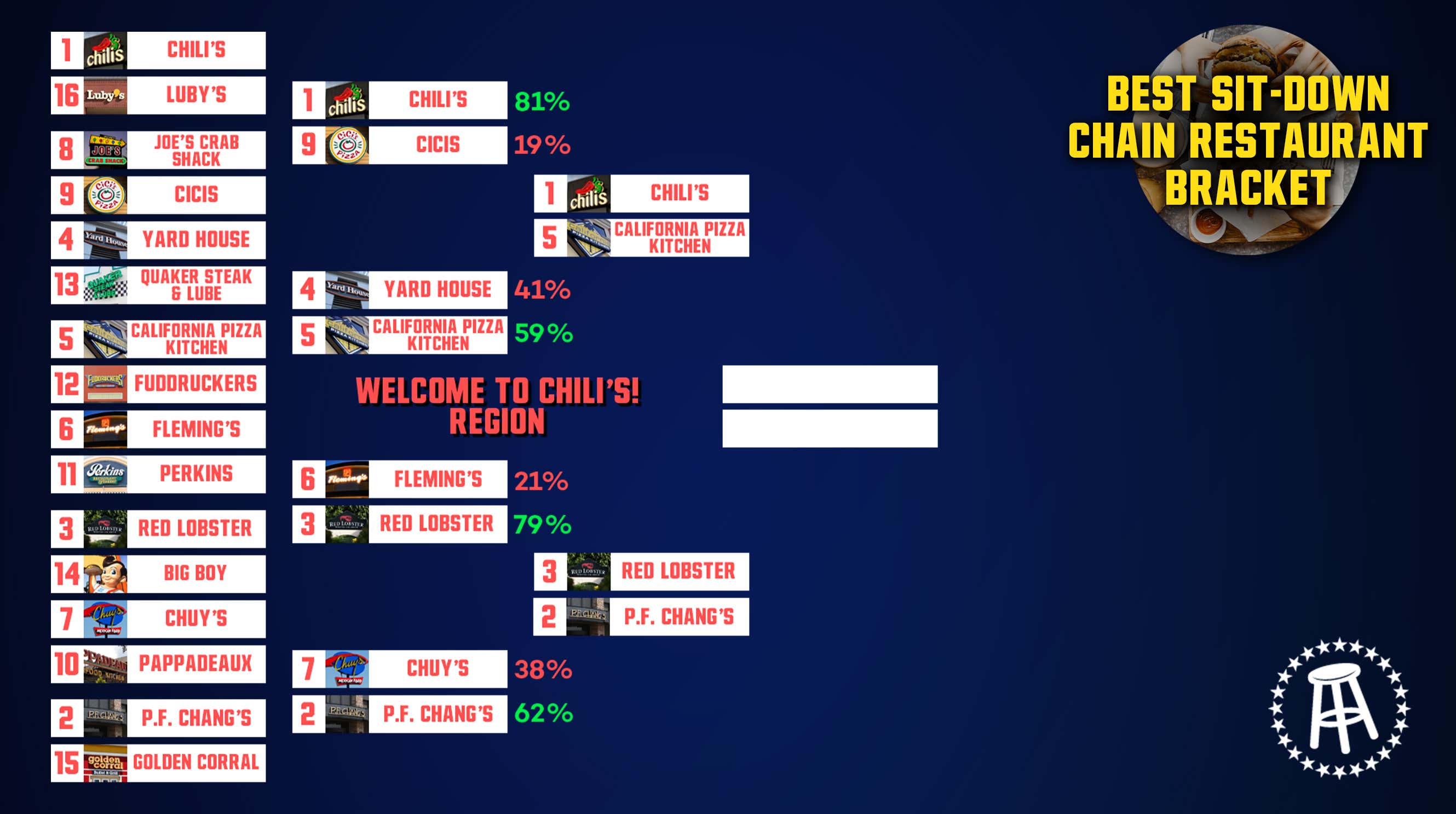 A region mostly dominated by chalk, this remains Chili's region to lose. The only other restaurant in the Sweet 16 with a performance as close to Chili's ass-kicking of Cici's was Red Lobster, which easily dispatched of Fleming's. An American institution, Chili's will not lose this region, even though all of my support is going to P.F. Chang's. Even with that restaurant, I see only a grim future because the Cheddar Bay Biscuits at Red Lobster should likely roll on. 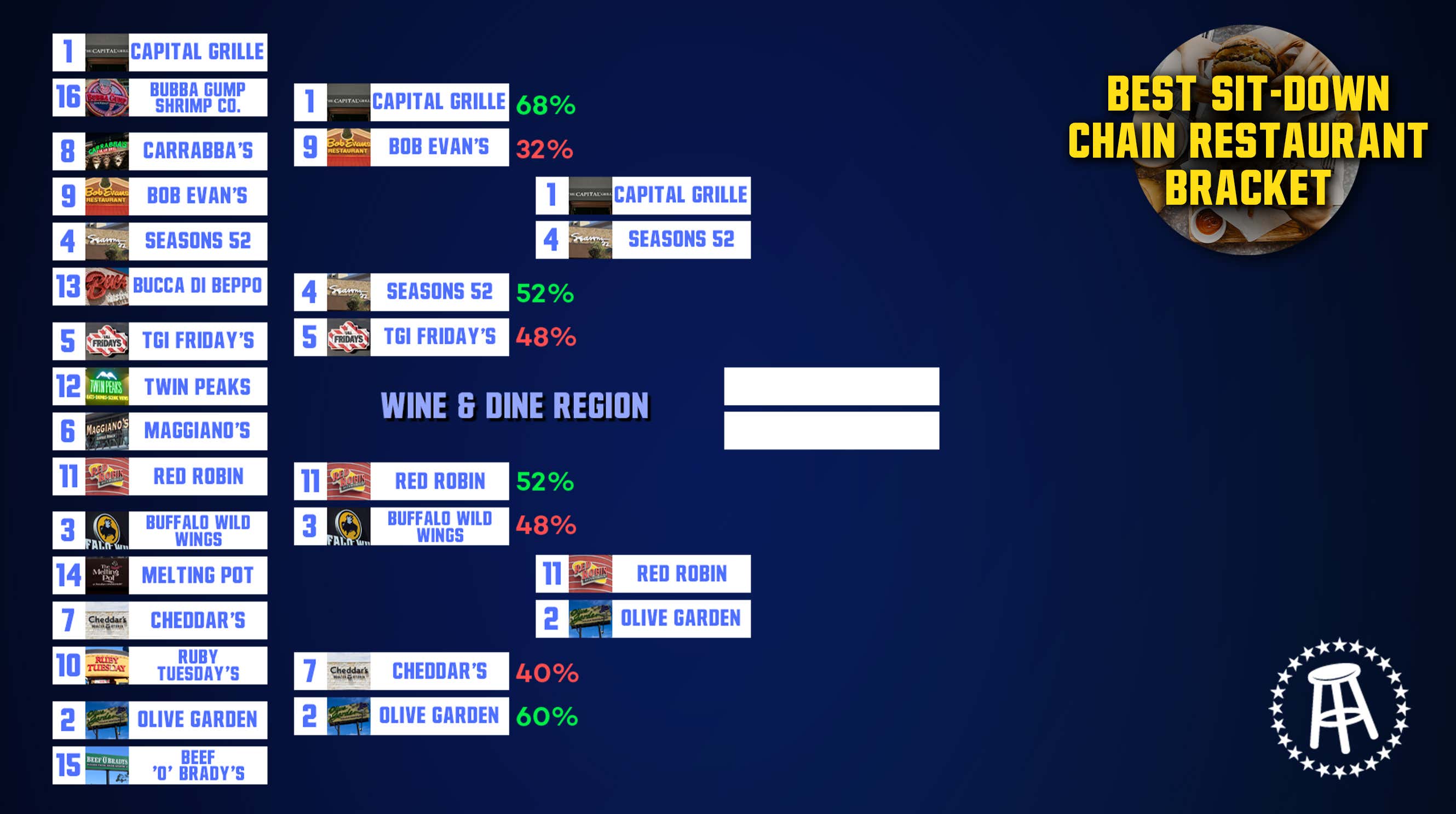 FUCK. Cheddar's had little-to-no chance at advancing, but I had some small hope for the restaurant. This is another region with a clear winner. People don't give a shit about being classy when it comes to chains, Capital Grille and Seasons 52 have no chance up against Olive Garden in the Elite Eight and the never-ending breadstick giant should roll on with ease. Credit to 11-seed Red Robin on the Cinderella run to the Sweet 16, though, any place that gives out unlimited french fries deserves some love. 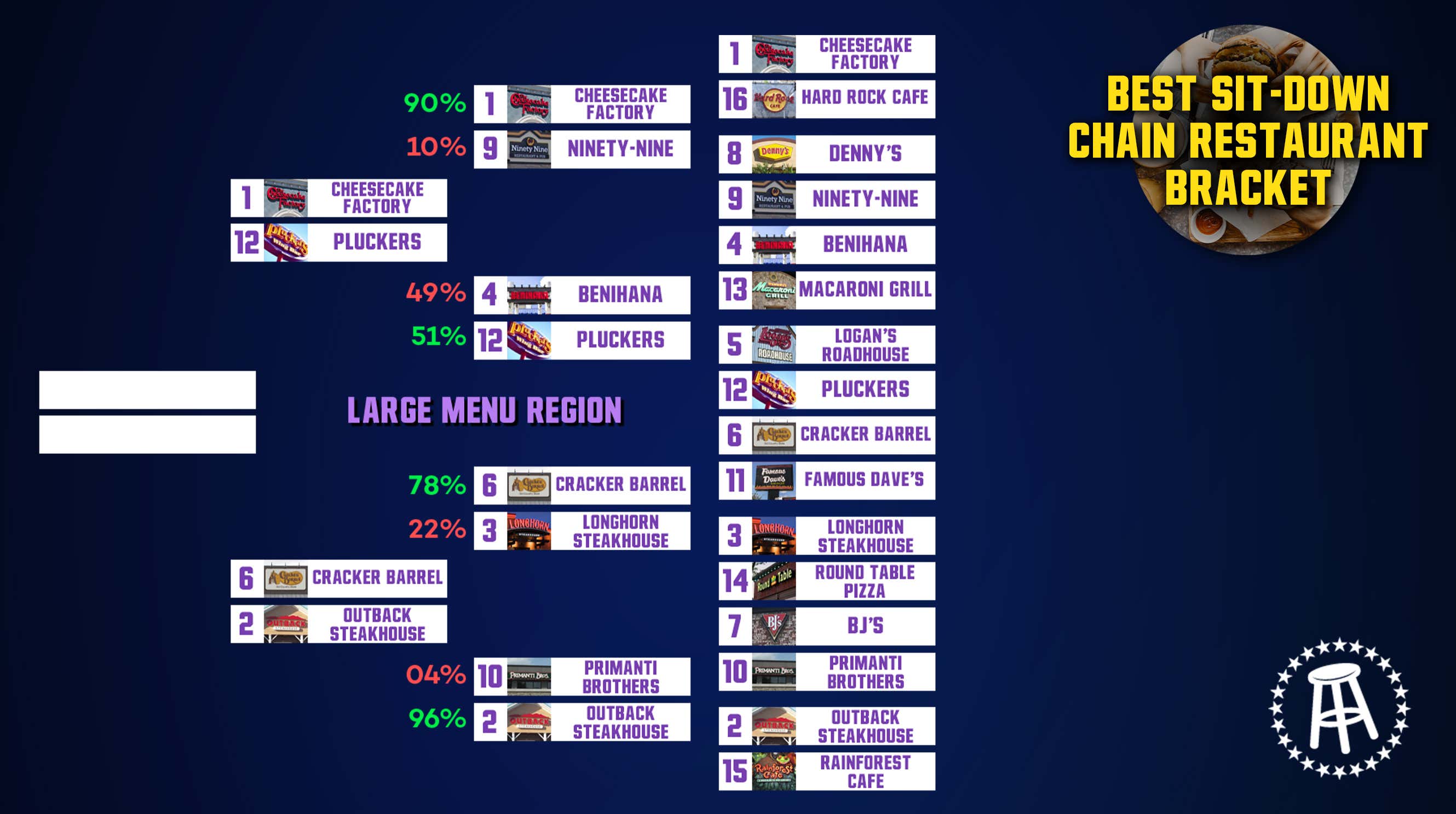 Bravo to the Austin and Southwest chain Pluckers on their upset of Benihana. Their social media accounts campaigned for votes and it paid off. I don't think it has a chance whatsoever against the juggernaut in Cheesecake Factory, but you never know. Also, pour one out for Primanti Brothers after region-favorite Outback Steakhouse stomped them into nothing with a 96% to 4% ass-kicking. 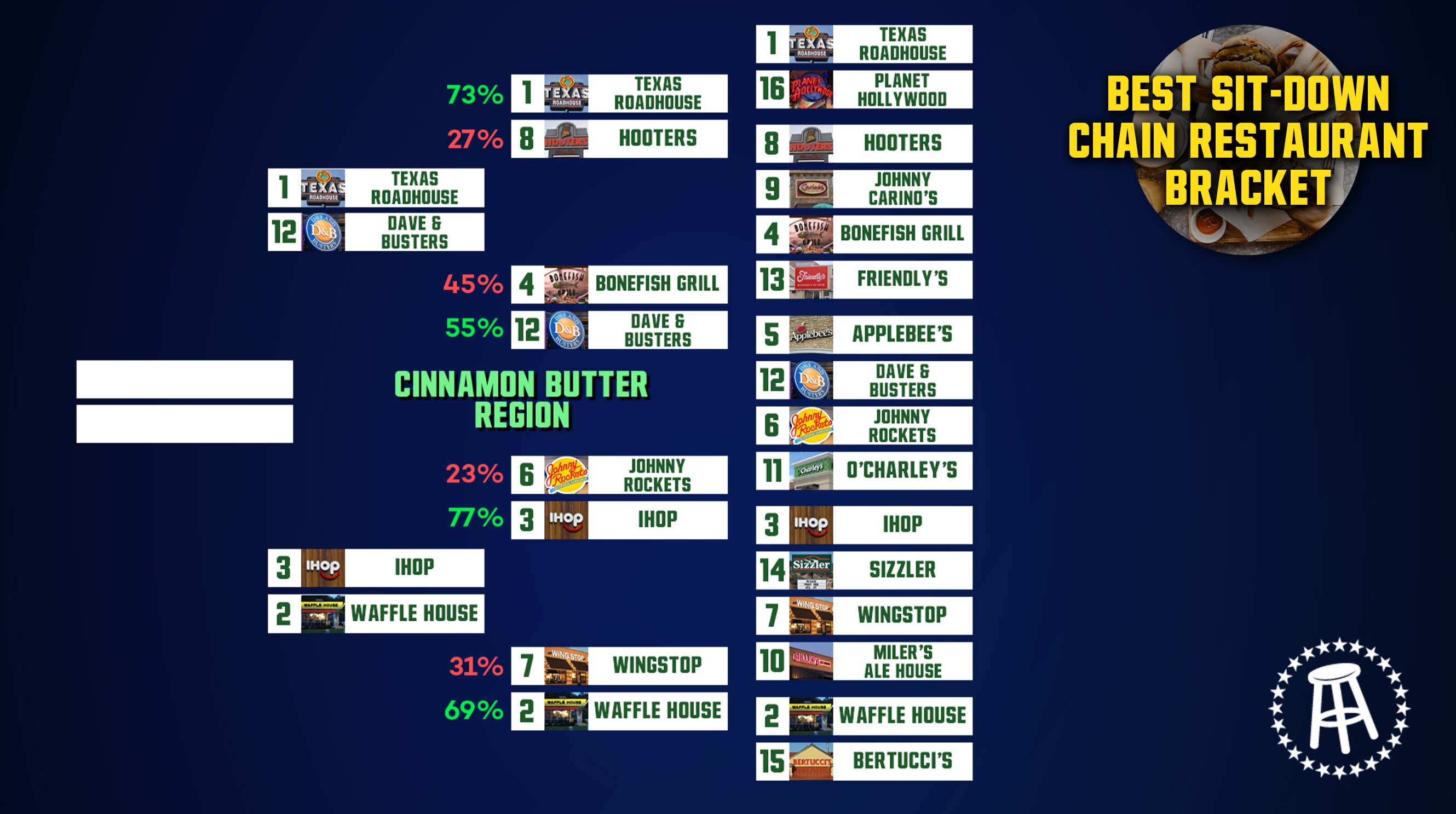 I think the Pardon My Take machine helped push 12-seed Dave & Busters to the Sweet 16, which makes me a little sad for Bonefish Grill and their Bang Bang Shrimp. My one comment on this region is that Texas Roadhouse doesn't seem to be the major competitor that I thought it would be. The damn region is named after them and they win with 85-or-higher percentage wins? The more this bracket competition rolls on, the more I am convinced Waffle House will go to the Final Four.

--
Voting will stay open until Thursday and you can also click this link (VOTE HERE) to give your input.