Weird, is that link the entire movie? For copyright reasons, I definitely didn't say that. Anyway, I remember convincing my mom to buy the director's cut of this DVD from a target bin with my mom when I was a young teen because I thought the cover art looked bad-ass. I hadn't seen the movie in theaters, but it had Orlando Bloom and Liam Neeson! That's Legolas/Will Turner and Qui-Gon to my young brain, which represented 3 of my favorite franchises. My younger brothers and I loved the hell out of this movie and I'd always just assumed that others felt the same. It wasn't til I was an adult that I found out that it had been a critical flop which was a mind-bottling fact to me. 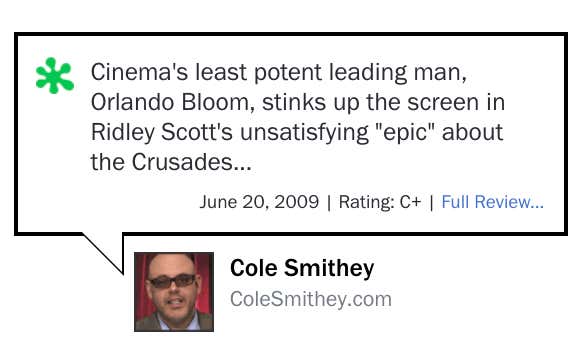 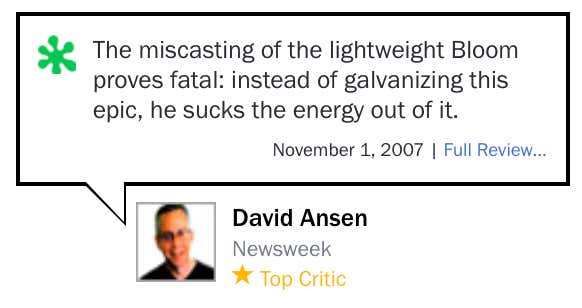 That's when I found out the massive difference between the theater cut and director's cut. The distributor, 20th Century Fox, did a bunch of screen testing, and concluded that 45 minutes had to be chopped off the movie. They wanted it to be a simple, clean-cut adventure movie, which is just not what it is. I don't know if they were trying to manufacture a new LOTR franchise or something out of this or what, but it was an absurdly dumb choice. The version that hit theaters is missing so much of what makes the movie great, including characterization, motives, empathy building and much more. The director's cut makes you feel the stakes of everything happening, while the theater version is a hollow vessel for battle scenes with a weird romance B-plot. DIrector Ridley Scott has said as much when he has looked back on the experience. I wanted to establish that so that you know that, in this review, we are talking strictly about the director's cut and not the theater version.

I enjoy Orlando Bloom's performance in this a lot, because his character (Balin) goes on a pretty damn bumpy emotional rollercoaster. And out of all of Liam Neeson's seemingly endless mentor roles, I think this may be his best one. Not only is he incredibly badass, but I love what he teaches Balin. It's not your prototypical "be a perfect angel!!!!!" type of mentor, but a pretty simple humanist one. I liked Eva Green's role and her portrayal of motherhood, especially considering her role in the theater cut was basically just window dressing. Edward Norton is underratedly good, and is able to convey a lot of emotion and sadness considering you never get to see his actual face. Marton Csokas and Brendan Gleeson are also outstandingly evil and Ghassan Massoud is an incredible Saladin

The main story this movie tells is simple and the romantic sub-plot fits in seamlessly. Also, The east vs. west, humanist messaging is subtle enough for my liking. There is great pacing for a 3 hour war epic, outstanding action that mixes practical fight sequences with CGI for scale, and some cool 1v1s. I mean, how can you not love this scene.

This movie is a fantastic watch that shows the strength of Ridley Scott's storytelling ability. He is always able to tell very personal stories while also moving along a much larger-scale overall setting. I wish more historical war epics like these would be made, regardless of historical inaccuracies, because they are able to give us stories about time periods we might not otherwise be too interested in. Thanks, Ridley.