ABC – Beach goers cheered a Pinellas County deputy Sunday as he took down two men in the sand, an encounter now spreading online through a Facebook video.

The deputy was responding to reports of a fight on the beach, according to the Pinellas County Sheriff’s Office.

The second man tries to intervene again and the deputy smacks him the chest, sending him back several feet and to the ground.

The video ends with the deputy sitting on the first man and his arm wrapped around the head of the second man, who is struggling against him. People from the crowd appear to step in to help put the second man’s arms behind his back.

In theory if you’re a cop at any Spring Break town I’d imagine you hate your job, just dealing with drunk stupidity with people puking on things and generally being assholes. But not this guy. He’s got his vest and his Erik Estrada vibes and did everything short of Hulk Hogan flexing as the crowd cheered whenever he roughed one of the kids up, easily dispatching them and soaking up every second of it. On the one hand it kind of annoys me because you can tell this guy just enjoys his power and embarrassing these dudes so much and that’s so douchey. On the other hand, if muscling around physically incapacitated little white kids like you’re wrestling with a pillow is your passion, why not cherish every second? Love emasculating drunk idiot kids half your size and you’ll never work a day in your life.

There’s a high likelihood someone has made this joke before but whenever drunk white kids like this get into a fight, the fact that people filming it don’t shout “BARSTOOL BARSTOOL” like when a hood fight breaks out and “WOOOOOORLD STAAAAR” rings through the air has to be one of Pres’s biggest missed opportunities.

Aside, I spent way too long trying to time out a perfect pause so I could tell if this chick is hot or not: 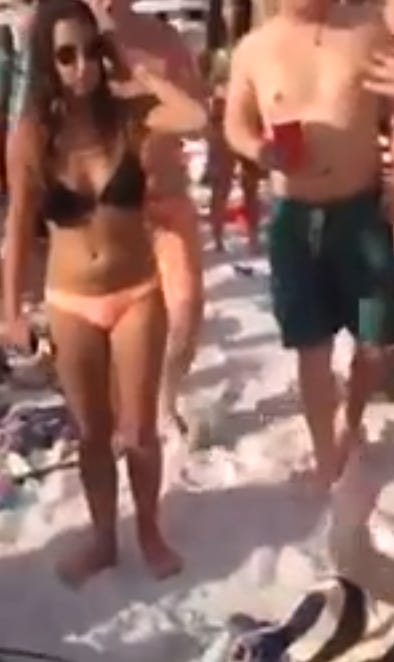 Grading on a curve for bikini chicks in the background of a Spring Break fight video, I’m giving her a 7.5 and a #BKACT as the cherry on top.