On Buddha Ben's last day at Barstool, Dave & Spider took a pit stop at 4:20pm to honor a talented videographer & beloved employee as he flew off on his next creative venture. As they took #monsterhits Dave predicted Ben would be back ("We haven't seen the last of that hibachi-eating doink-smoking guy,") but it looks like he's making his way in West Hollywood, CA.

I decided that 4/20 would be as good a time as any to reach out and see how he's been doing. Turns out we're in the same 'not sleeping at all' boat and he warned me he was delirious and might not make sense. Same here, Buddha. Same here.

Me: Have you had a chance to really establish yourself out there yet?

Buddha: Well I've been out here since September. I like it, it's cool, but I feel like I haven't done enough yet. I got work stuff set up, but then came back East for some weddings & holidays so it was like back & forth for 3 months. Couldn't get into a groove. Then in January when I was really starting to go out & do more & get into things.. Corona hit.

I was on it quick, too. I started panicking mad early and people were calling me crazy. I would message Donnie being like, "Is this thing real?" I was sending him videos of hospitals and people panicking ahead of the game. Made me kind of stay inside more in February and then by March I was fully inside.

Me: No shade at Donnie at all because how could anyone have really known what this would become, but Buddha you were way ahead of the times! So how much weed did you stock up on while feeling that things were about to get dicey?

Buddha: I stocked up on 8 weeks worth of weed but did not foresee that 8 weeks would run out ON 420…. So yesterday I ran out. Like how did this happen? [cracking up] So I went to a dispensary last night and got fresh new weed & stocked up.

Me: Not gonna lie, you stocking up again is sort of surprising to me because last I saw you were done smoking blunts. I was like, "Man, this is a big deal - huge blunt guy!"

Buddha: [big laugh reminiscing on that time he quit blunts]

Ok, so I was eating kabob w basmati rice one night and all of a sudden I felt like the rice was stuck in my throat . Coughing wouldn't get it out. Three days later I went to urgent care because the feeling of rice was still there. I got to thinking it could be from smoking, and urgent care said I should just stop smoking blunts but I didn't take that too seriously because it was just urgent care. So I kept smoking blunts but the feeling got worse. Then a chest thing started so I went to specialist and this guy was like, "You have a bad acid reflux problem," so he gave me pills.

He told me - and this guy I trusted - he was like, "You should stop smoking these backwoods - stop doing that to yourself". I did that but… five days I lasted maybe? I got through the chills - I've been smoking blunts for 10 years now - every day for the past 8 years -So I'm definitely nicotine addicted to the tobacco. But then I was editing stuff and it was hard for me to edit.

I watched this YouTube video on quitting that was like, "You don't wanna do habits that you normally associate with smoking weed." And I was like.. Well….'whenever I edit videos I smoke blunts during the whole process and that's how I make my living,' so I started smoking blunts again. But once this [quarantine] is finished I'll stop. I wanna quit in 2020. I am off backwoods though and onto Fronto leaf.

Me: Is that healthier?

Buddha: I don't know but it's way cheaper. [both LOLing]

Me: One of the reasons I wanted to reach out was seeing your paintings on my timeline. How'd you get into this since normally you're doing video shooting / editing?

Buddha: Well I like doing music videos & that sort of stuff but I don't love the business side… the money talk, the having to pitch yourself to an artist. It's fun to do when it's an artist I like a lot and we're working together creatively but it's not always like that. So I'm trying to find a balance between doing that, but also being able to get by making things of my own & telling my own stories. And these paintings are one of those projects for myself.

Me: So is the Buddha character in your work supposed to represent you being in like, a whole new world?

Buddha: No, Buddha is not me at all. A lot of people think it's supposed to be me, but he's just a little guy I dreamed up… This character in a greater colorful world. I don't even know his age. It's part of a bigger picture. I've been drawing since I was a kid - got notebooks of characters - and a giant bird was the original sketch and Buddha was for size comparison. 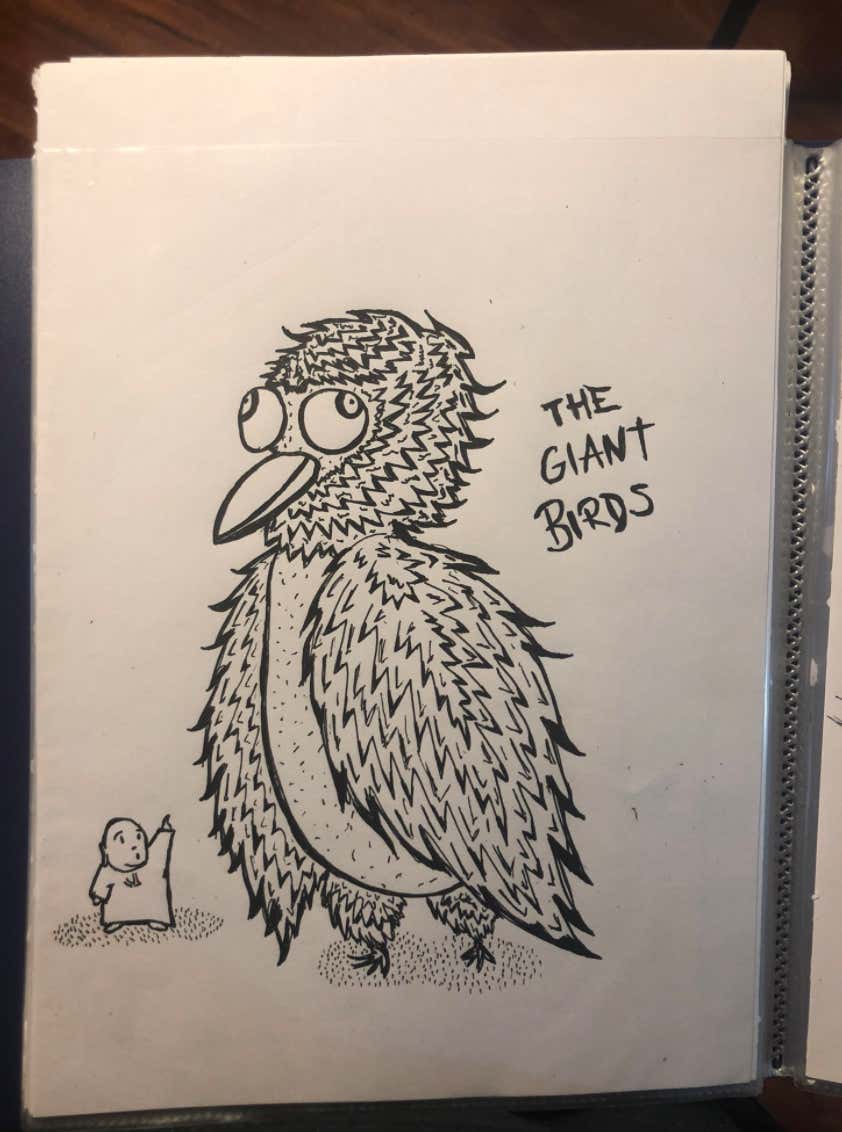 Me: And then you started painting these drawings and it looks like the response has been really positive. Was your plan with this from the start to sell paintings?

Buddha: No, not at all. All these paintings are sketches I've done over the last couple months, and then I saw a friend painting and ordered a bunch of supplies and started painting them. And I had no plan of selling any but people started asking.

Now I'm on zero hours of sleep trying to figure out printing and shipping and the whole process of how that works. I don't want to fuck up getting it to people who ordered 'cause I'd be a huge asshole. I also launched my site for the art today.

Here's the art you can get prints of on the site:

Buddha And The Giant Bird: 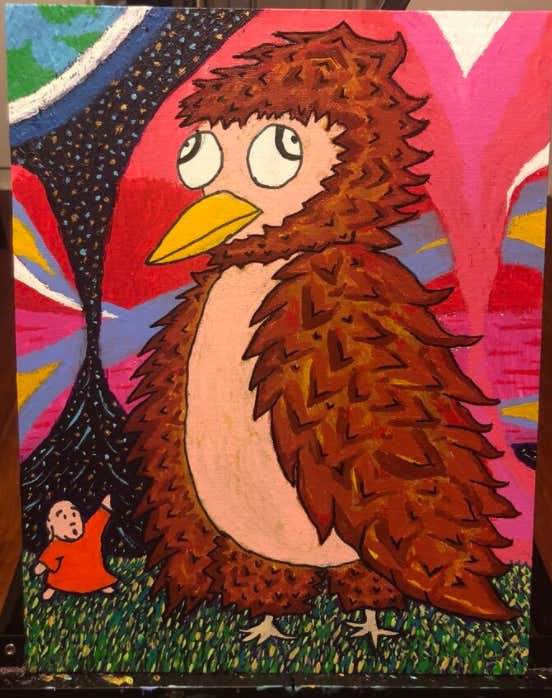 Buddha And The Angry Asteroid: Buddha with his friend, a royal penguin, trying to save the world and their island called Kazookie. Those colorful specs you see going towards the asteroid are gummy bears jumping towards it in an attempt to sacrifice themselves and save the world. Buddha's buds -  the koala & gray alien - are at the helm of the ship. 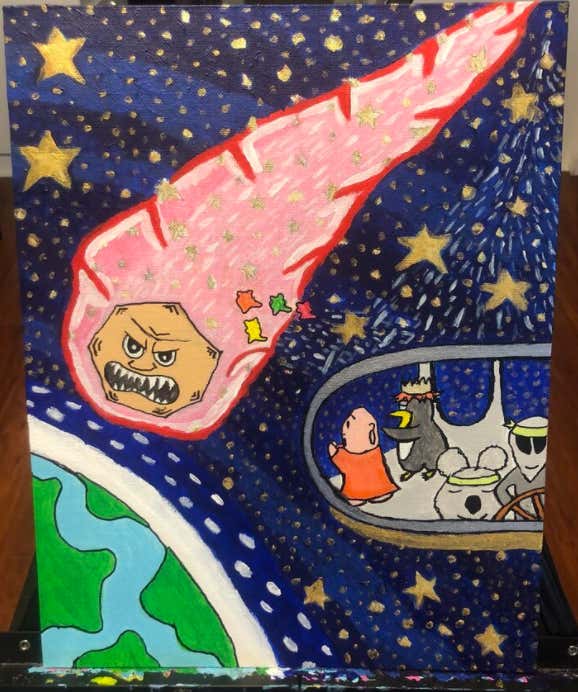 Buddha And The Other Side Of The Door: 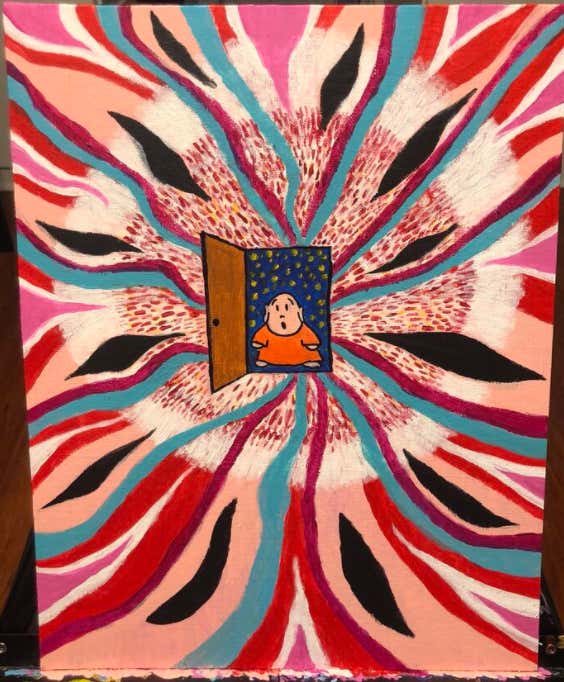 Buddha And The Bodhi Tree: "This one's just a sketch that got more interpretive once I started painting . It just ended up that way. The Bodhi tree in Buddhism is where he found enlightenment." 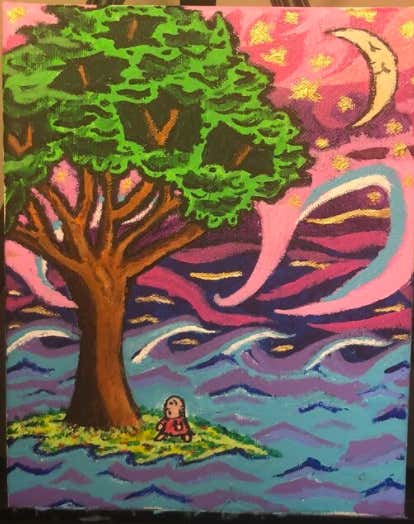 Buddha And The Gummy Bear Forest: Gummy bears play an integral role in Buddha's world. Cliff the koala (and baby Cliff) are the leader of the gummy bear forrest, and none of them want to wake up the sleeping volcano. 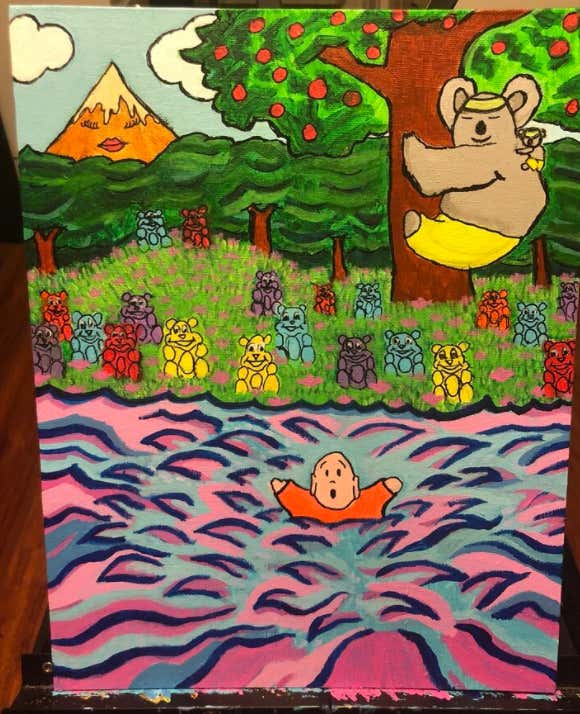 Buddha And The Big Balloon Bang: 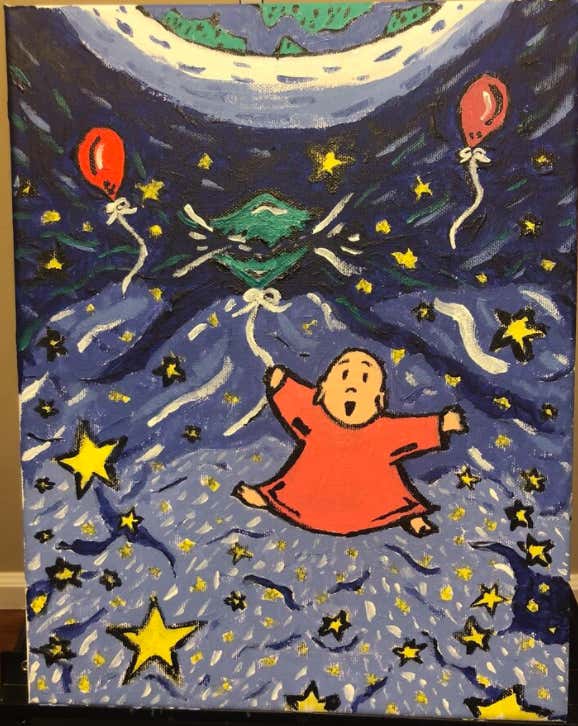 Ben didn't quite specify for what, but he alluded that this is part of a world of characters he's creating & growing for future creative endeavors. It's all part of achieving his dream scenario:

Buddha: Right now the dream is making enough money to cover rent & live off doing stuff I create. What I love doing is film, and not necessarily music videos all the time, but creating funny worlds and telling stories. Anything I can create. Anything where I can make a living doing what I'm actually interested in.

Looks like he's doing just that. Happy for him. If you are, too, be sure to check out some of his work.

In closing, the important info from an expert:

Me: Any shows you'll be watching today?

Me: Sweet, thanks so much for taking the time to do this!

Buddha: For sure. I was gonna say I'll tweet out when you post but I'm about to try to finally sleep and won't be awake when you post this.

Me: No worries, go zonk out!

PS. He'll be on the next episode of Token CEO with Erika so stay tuned for that: