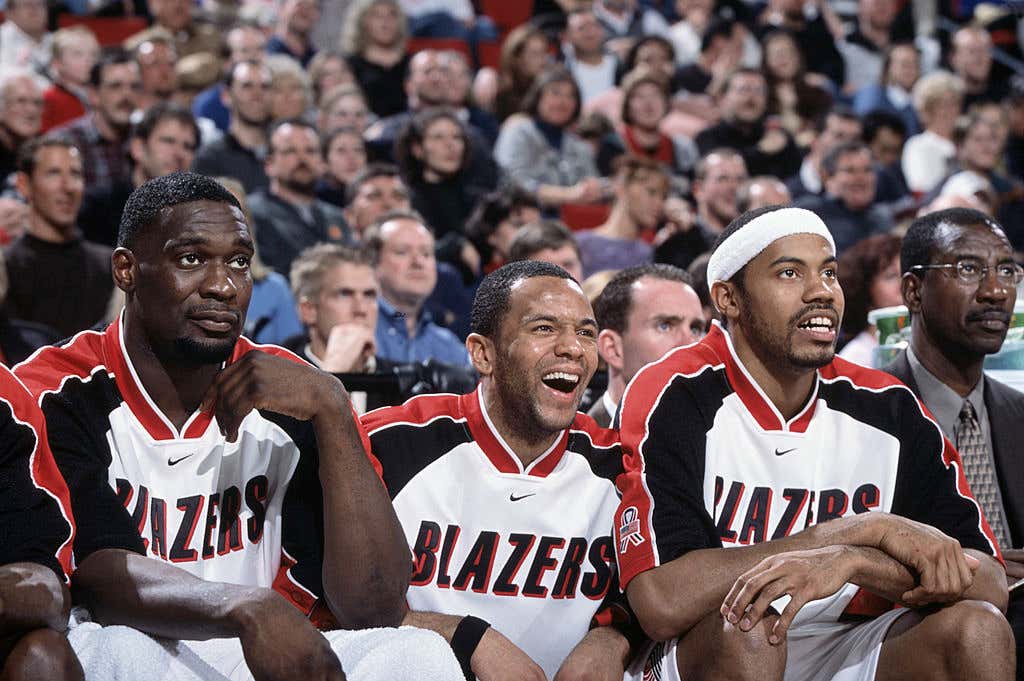 I've talked about it before on the blog how any sort of NBA/player documentary is one of my favorite forms of content. Nowadays with everyone and their grandmother having a production company, we're starting to see more and more of these type of projects get released and for the most part they are all awesome. Maybe not Last Dance awesome, but great nonetheless. So with everyone still talking about the first two episodes from last night, it made me think about what type of documentaries I hope we get in the future. They don't have to be giant 10 episode monsters, but topics I hope we at least get something from. This is an endless list with a ton of awesome moments/stories in NBA history, but these were some of the first that popped into my brain

I need this to somehow find the light of day. Just think of all the stories from that era of Blazers basketball. The list of characters on that roster, this would be one of the greatest basketball docs of all time in my opinion. The Sheed stories alone would be incredible, but you add the likes of Bonzi Wells, Stoudamire, Shawn Kemp, man it has to happen.

Think of the stories that are already being leaked about the Arenas Wizards. Pooping in a teammates shoes, rubbing Nick Young's expensive sunglasses on his ballsack, the whole gun in a locker room situation, all while the Wizards were pretty bad. All I know is every time someone like Gilbert or Swaggy P comes out and starts telling stories about that time in Wizards history it sounds so ridiculous. But that was Gilbert Arenas. Not to mention he was pretty damn good on the floor too.

You could argue this one blocked trade changed the NBA forever. So many amazing "what ifs" and ripple effects came from David Stern's decision to block CP3 to the Lakers. It would be fascinating to get some behind the scenes footage/stories about how that all went down. Remember it was shady as hell with the league running the Hornets, there's no Lob City if that never happens, maybe Paul and Kobe win multiple rings together. This is definitely high up on the list for me.

I'm pretty sure you can take this one to the bank. At some point we're going to get an amazing documentary about the Warriors Dynasty run. What that franchise was able to build through savvy drafting/front office decisions is pretty rare, and then you add the whole Durant element to it. Hopefully once everyone is retired and willing to be honest about the entire situation they sit down and put it on camera for the rest of us to enjoy.

Much like the Jordan era bulls and the Warriors dynasty, I'd be very interested to see something similar with the Spurs. It's not every day you see a franchise win 50 games for like 20 years straight. That's ridiculous. I want some insider stories about these secret Popovich dinners. There's the whole Duncan almost going to Orlando ordeal, Tony Parker banging (allegedly) a teammates wife. I just think when you have a franchise that achieves that level of sustained success there has to be an abundance of never been told before stories/never seen before footage. Imagine once Pop retires he decides to be nice and actually opens up? I'll listen to that.

You know this is eventually coming. Especially with the success that MJs doc is going to have. At some point we're going to get something similar and it's going to be pretty damn good. He'll probably call it The Final Dance or something to troll MJ, but there's no denying the story of LeBron and his rise to becoming one of the best players in existence is pretty fascinating.

These were just a few that popped into my head when I started this blog. As I said there are a ton of options to choose from that you could argue would make a badass documentary. What would be your pick that isn't listed here?