As a lifelong Blazer fan, I can tell you that watching The Last Dance will bring me just as much pain as pleasure. You see, as the documentary quickly skimmed through, Portland passed on MJ for Sam Bowie, which now we call the Sam "Who-ie" draft pick, because he, you guessed it, pretty much disappeared as fast as he appeared on our roster.

But the more I dig into the story of the 1984 draft, the more upset I get. The more nauseous I feel.

Frankly, it's disheartening. And if you want to know how Portland became such a woeful organization? It starts right here.

Let's start from the beginning.

It's 1982. The Indiana Pacers just lost their center to the Cavs and needed to fill the gap. In order to do that, they traded their 1984 1st round pick to Portland in exchange for Tom Owens, a journeyman center at the end of his career. In hindsight, the Pacers have the right to feel snake-bit as well.

Fast forward to 1984. The Portland Trail Blazers are an up-and-coming power coached by one of the great minds of the day, Dr. Jack Ramsey. They finish 6th in the NBA with a record of 48-34, 3rd in the Western Conference. And they have one of the top two picks in the draft. It's going to come down to a coin flip between them and the Rockets for the #1 selection.

Hakeem Olajuwon is the consensus number 1. Whoever gets that pick will surely choose him. The Blazers wanted him bad, too (they had previously drafted his Phi Slamma Jamma teammate Clyde "the Glide" Drexler). So bad that they "got fined $250,000-- the largest fine to that date in NBA history-- for making indirect and illegal contact" with The Dream. The first L of the draft is a record-setting fine.

It would not be the last.

The second L was the coin flip. The Blazers choose Tails. Annnnd its a fail. Ughhh.

So yeah, losing the coin flip hurt. But surely the 1984 draft wasn't about just Hakeem the Dream, was it? What's left after Olajuwon? Who should the Blazer target at #2?

Well, there's Charles Barkley, a bruiser out of Auburn, a wiry little guard named John Stockton, a kid out of UNC named Michael Jordan, the college player of the year who just came off of a National Title, and a center from UK with a known "history of injuries" that sidelined him for TWO SEASONS by the name of Sam Bowie.

According to Blazer owner Larry Weinberg, the choice was easy. It was between Jordan or Bowie. In his opinion, "It [was] like asking to choose between Michael Jackson or Robert Goulet".

Listen, I like ballads as much as the next gal, but I'll take Michael Jackson over some washed up lounge lizard. What a wild comparison he made.

Anyone else getting a little nervous?

At this point, the Blazers are leaning towards Bowie because they already have 6'6 shooting guard Clyde Drexler, and the front office couldn't see the Jordan and Drexler functioning together. Which, as it turns out, is not just stupid but factually inaccurate.

In the '83 season, The Blazers gave considerable minutes to three 6’6/6’7 guys… Calvin Natt, Drexler, and Jim Paxson… All highly productive. In the offseason, they traded Natt and a first-round pick in the '85 for a stud named Kiki Vandeweghe, a 6’7 SF with deep range. Their Center at the time was a 6'10 Mychal Thompson who averaged ~16 a game. The 1983-1984 roster looked like this.

Oh yeah and that budding star, Drexler? Coming off the bench as a rookie, averaging around 8pts/game. Four guys all around the same size, co-existing together with a scoring, yet undersized Center. Also, they knew that drafting Bowie would "create a logjam at the power forward position" and create a domino effect of problems. Look above, what the Blazers really needed was a point guard. And they had … Darnell Valentine?

You mean to tell me Jordan couldn't play the 1?

But, trust the process amirite? Let the experts do their jobs. They apparently wanted to add more depth to an already very deep roster along with a "dominating center." The problem with "trusting the process" at this point was that even though Blazers GM Stu Inman was known as a genius, he had a recent history of draft blunders.

In 1973, Inman took LaRue Martin over Bob McAdoo. In 1978, Inman decided to draft Mychal Thompson instead of acquiring the draft rights of a college junior-eligible named Larry Bird. "When it came time for the Blazers to make their first selection in the 1981 college draft, they could have chosen Larry Nance, Jay Vincent, Danny Ainge or even Ray Blume. Instead, they took Jeff Lamp, who was waived a few years later."

So of course, draft night comes, as we all now know, and the Blazers choose Bowie over all of the other possible choices, most notably Jordan (FML).

Many compare this pick to the 2007 draft where the Blazers selected Greg Oden over Kevin Durant. This is not the same. Due to Bowie's existing injury history, this is much, much worse.

Let's go through it. What was already known pre-draft? In the third to last game of his sophomore year, Bowie sustained a stress fracture to his left tibia going up for a dunk. That injury usually takes 8-12 weeks to heal. For Bowie, it took him TWO SEASONS. He missed all of the 1981-1982 season AND the 1982-1983 season. He was in a cast for 44 WEEKS. After removing the cast, doctors realized the bone never healed properly, so Bowie had to have it surgically repaired, with a bone graft, at yes, 22 YEARS OLD.

Even Bowie admits at this point he still wasn't back from the 2-year layoff. "Bowie admits that his shooting eye still is suffering from the long layoff" and that "[he] needs to work hard on it over the summer."

And yet, the Blazers still decided to take this kid with the #2 OVERALL PICK.

WILD MOVE. Are you upset yet? I know I am.

Is it that the Blazers believed that Bowie had the upside to be TRANSCENDENT, so that GM Stu Inman thought he was worth the risk?

Inman's scouting report for Bowie left lots to be desired. Some of the highlights are as follows. "Portland is going through great pains to make sure he's healthy." (They didn't) "He's very upbeat, and will fit harmoniously in our structured system". (He didn't) "I certainly think Sam could be, within a couple of years, one of the 5 maybe 6 centers in the league" (He wasn't. Not even a little bit).

Are you really going to draft a center with a long history of injury at the #2 spot WHO YOU BELIEVE THE BEST CASE SCENARIO IS THAT HE WILL BE, IF THINGS WORK OUT PERFECTLY IN A COUPLE YEARS, MAYBE A TOP 6 CENTER? You're taking with the #2 pick a guy where you HOPE his ceiling is Steven Adams? 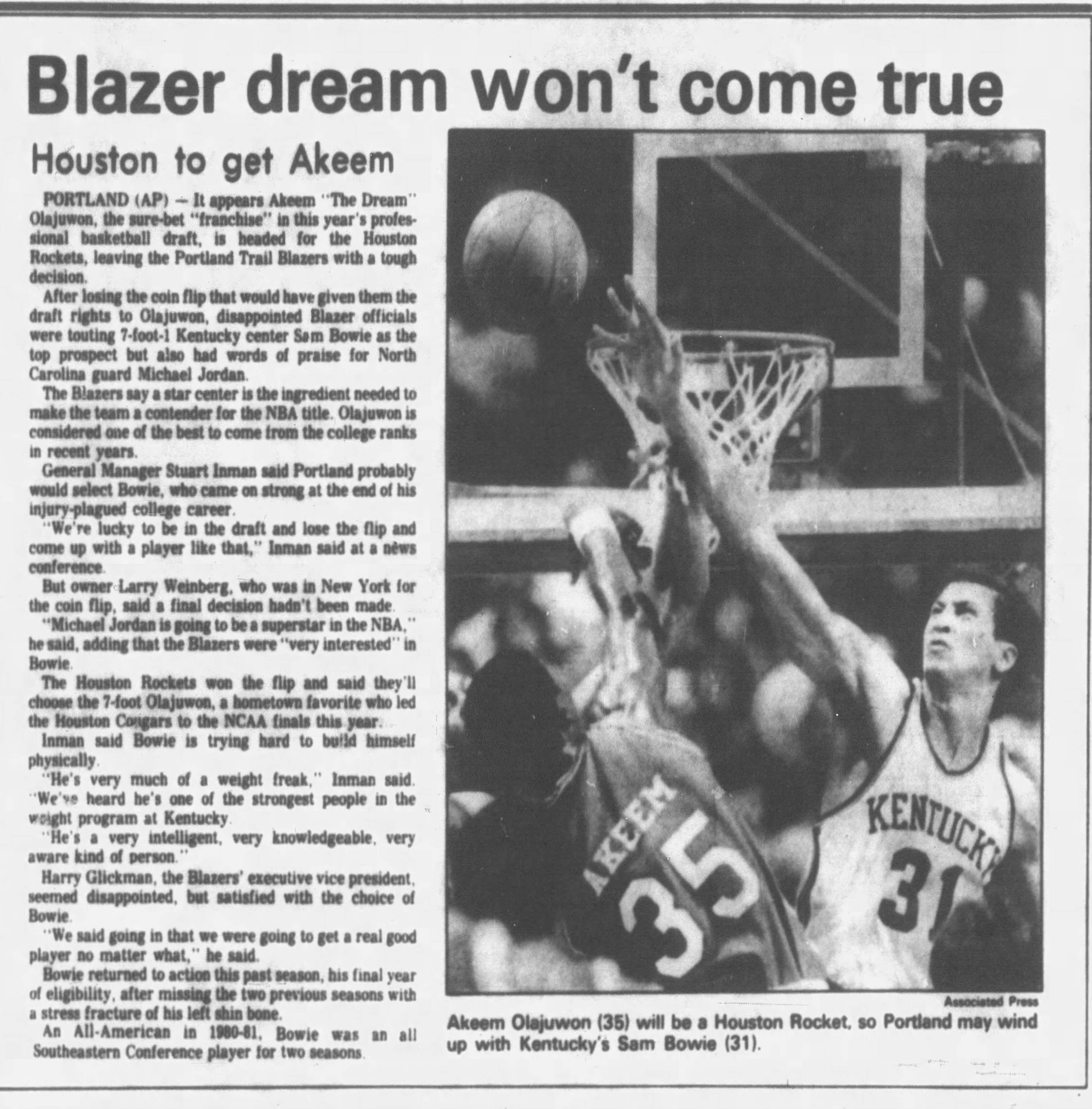 From Blazer owner Larry Weinberg: "Michael Jordan is going to be a superstar in the NBA." GM Inman even admits that Jordan is the best player in the draft yet refuses to draft him because of "need".

Once Bowie was drafted, how long did it take for things to go off the rails? Pretty much immediately. The Blazers were so confident in their pick that they tried to stick an injury clause in his contract to "protect them against a reoccurrence of the injury that kept him from playing for two years." This sidetracked contract negotiations as Bowie held out and was one of the LAST ROOKIES SIGNED THAT YEAR.

In the summer of 1984, Bowie sat out of the Olympics (due to risk of injury and those sticky contract concerns) and Jordan, well uh, dominated. Coach Bobby Knight called him the greatest basketball player he'd ever seen.

From an article in the Statesman Journal in the Summer of '84:

Based on his play so far for the US National team, the acrobatic Jordan, is headed for superstardom. Meanwhile, Sam Bowie, the Blazers #2 pick, is sitting at home watching the Olympic team on television.

Eventually, the contract gets done - the 3rd richest rookie contract to date in NBA history. And 8 days later after signing his contract, Bowie gets injured. Again. 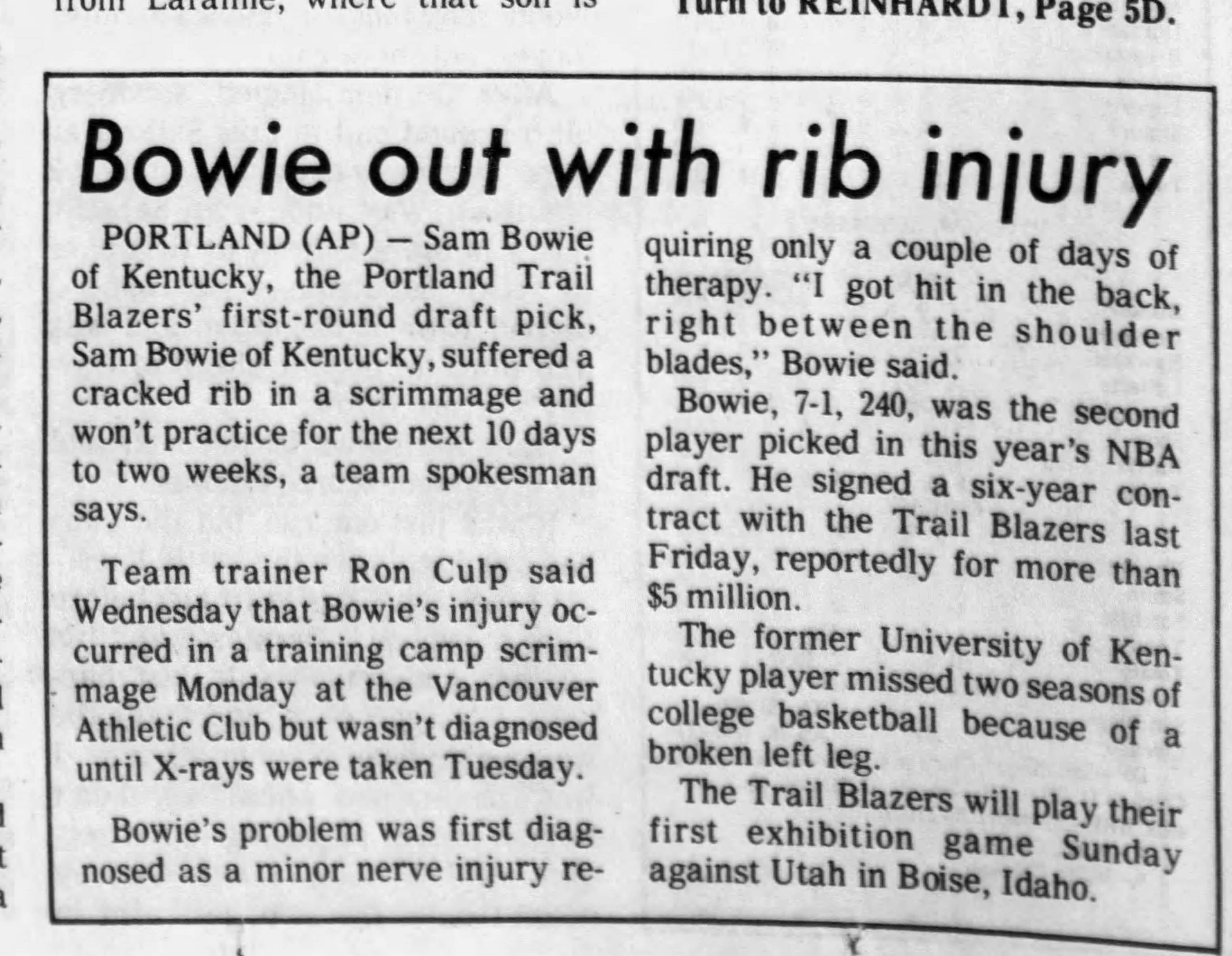 Bowie lasted ONE SEASON with the Blazers before his leg injuries reared their ugly tibias again. During a game against the Milwaukee Bucks at The MECCA, Bowie and teammate Jerome Kersey got tangled up going for a rebound and as they landed, Bowie's left tibia broke and he was carried off the floor on a stretcher.

Bowie subsequently had surgery, with three screws being placed in the bone to keep it together. But, two screws did not hold and another operation was needed to put in three new screws.

The next season, Bowie returned. In the season's fifth game against the Dallas Mavericks, Bowie went up for a jump hook shot. As he went up, his legs buckled underneath him and Bowie fell to the floor. He suffered a season-ending fracture of his right tibia. Bowie compared the feeling having his leg chopped by an ax.

He tried to come back again, and again. And it just never ever worked. All told, Bowie played 63 games out of a possible 328 during his last four seasons in Portland.

The only thing that went right for the Blazers was getting the pick from the Pacers, to begin with. And everything after was a horror show from there.

The What Ifs are almost incomprehensible. Clyde Drexler, Michael Jordan, Jim Paxson, Kiki Vandeweghe, and Mychal Thompson on the floor in 1984-1985? On a team with depth that won 48 games the year before? You've got a dynasty on your hands.

Subtract Jordan. Add in Barkley or Stockton? This teams wins an NBA championship. Maybe more than one.

NBA history would have been rewritten.

It's enough to make a grown woman cry.