Well that’s one way to go about it Bill. Just pretend nothing happened and win everyone back with laughter. Throw in a Fat Albert voice. 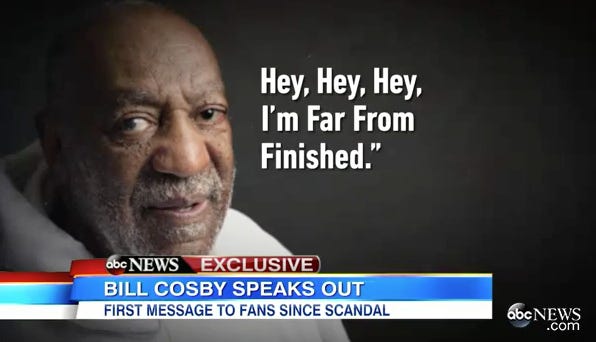 And hope everyone is just like, oh yeah, that Cosby guy raped a million chicks buuuuut he did make us laugh and he is doing a string of shows in West Virginia soooo yeah, we’re all good. And you know what, in a weird way, it sort of worked. That video was so strange and odd that I sort of forgot Bill Cosby likes to rape people for a split second. He’s more old weird guy with glass eye that still uses a rotary phone like a pyscho than a rapist, kudos Bill, Mission Accomplished, or something, even though yeah, you’re still the scum of the earth.