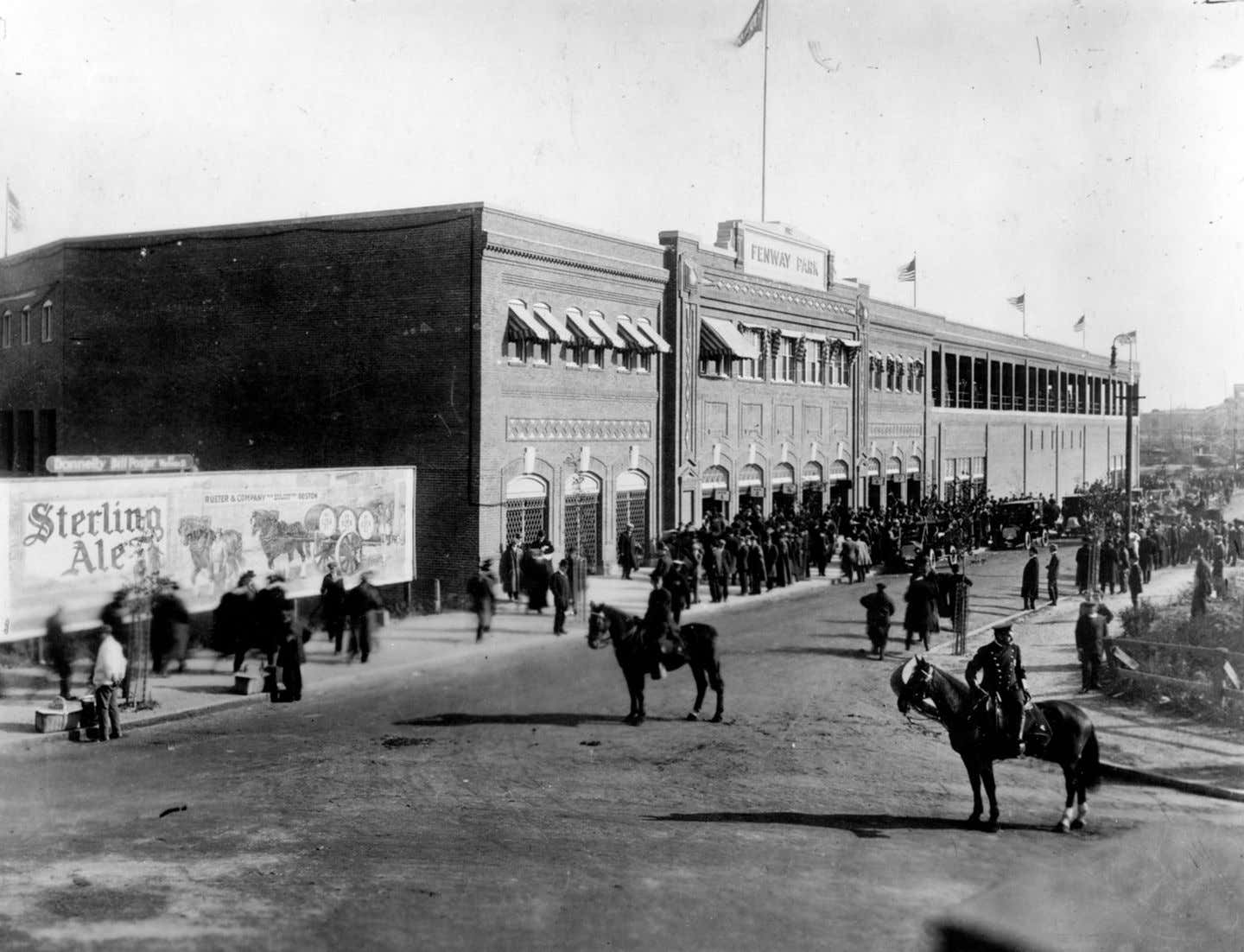 After 11 seasons at Huntington Avenue Grounds, the Boston Red Sox open their new stadium in the fens a marshland area in Boston. The new stadium is named Fenway Park, which was built in the dimensions allowed by the neighborhood. The large left-field wall was designed to protect the neighboring businesses. The Red Sox would win the first game at Fenway Park 7-6, beating the New York Highlanders in 11 innings.

The Boston Red Sox were among the best teams when the American League started play in 1901. They would win the first World Series in 1903 and repeated as American League Champions in 1904, only to have the plug pulled on a second World Series by John McGraw of the New York Giants. They had a few rough years but were on the rise again when they got set to open their new stadium led by player-manager Jake Stahl.

The Huntington Avenue Grounds, like all ballparks at the turn of the century, was wood framed. As the popularity of baseball grew, the demand for larger, more durable parks led to the growth of concrete stadiums beginning with Shibe Park in Philadelphia in 1909 a short time later Forbes Field opened in Pittsburgh. Over the next few seasons, some of the older parks, including Sportsmen’s Park in St. Louis and the Polo Grounds in New York, were retrofitted with concrete and steel. In 1910, the White Sox opened Comiskey Park. Two more new parks opened in 1912, with Fenway Park in Boston and Navin Field in Detroit both hosting their first game on April 20, 1912 days after the sinking of the Titanic.

A crowd of 24,000 was on hand at Fenway Park, as the Boston Red Sox hosted the New York Highlanders. By 1912, the Highlanders were becoming more well known as the Yankees, as New York’s American League team, a nickname they would fully adopt in 1913. Buck O’Brien made the start for Boston, and had rough first inning, allowing three runs in the first inning. The Red Sox would answer with one run off New York starter Ray Caldwell. In the third inning, the Highlanders added two more runs to take a 5-1 lead.

The Red Sox began to claw their way back in the game in the fourth inning as they plated three runs while chasing Caldwell from the game. Jack Quinn took over and gave up the tying run in the fifth. Charley “Sea Lion” Hall came to pitch for Boston in the fifth and held New York at bay until the eighth inning when the Highlanders took a 6-5 lead. Boston answered right away, with the game going into extra innings tied 6-6.

With James “Hippo” Vaugh on the mound for New York in the 11th inning, Steve Yerkes reaches second base on an error by third basemen Cozy Dolan. Yerkes would come into score the game-winning run on a single by Tris Speaker, to give the Red Sox a 7-6 win.

The Red Sox would win their second World Series in 1912, beating the New York Giants in seven games. They would later win three championships in four years between 1915-1918, with Babe Ruth on the team. Ruth would subsequently get sold to the Yankees, creating one of baseball’s greatest rivalries.

Fenway Park today is the oldest operating stadium in MLB. Over the years, there were several changes. A manual scoreboard was added in 1934 after the stadium was expanded. In 1947 lights were installed; that same year, the 37-foot wall in left field was painted green, earning the nickname “Green Monster.”