I know we don't give 10.0's out here but at the same time I'm not eating pizza and I don't give a fuck. We're talking about Michael Jordan. If there's ever been a time to drop a 10.0 it's right now because I need it, you need it, and this fucking doc deserves it.

So far we've learned how bad Kerry Krause needs to fart. How much Mike changed the culture to start from being party boy animals to focused professionals. We learned that Phil was told to fuck off long before the 1998 season started and that lead to him to naming the season "The Last Dance" literally. But most importantly we learned that MJ completely took over the league 2 weeks into his career. Just an unbelievable turn of events from what's arguably the greatest nickname of any 80's professional sports team

Elsewhere, we got a good chunk of how dominant he was in college which is a nice change of pace from him dominating 7 foot Europeans with bad haircuts

But most importantly is the savagery. Motherfucker has it out for JK and as we'll learn later there's very good reason for the hatred

And now we're into Part 2, thematically aligned with Scottie Pippen and his role as MJ's righthand man. 10 minutes in and I'm already notably uncomfortable and that's before I show you his salaries with the Bulls: 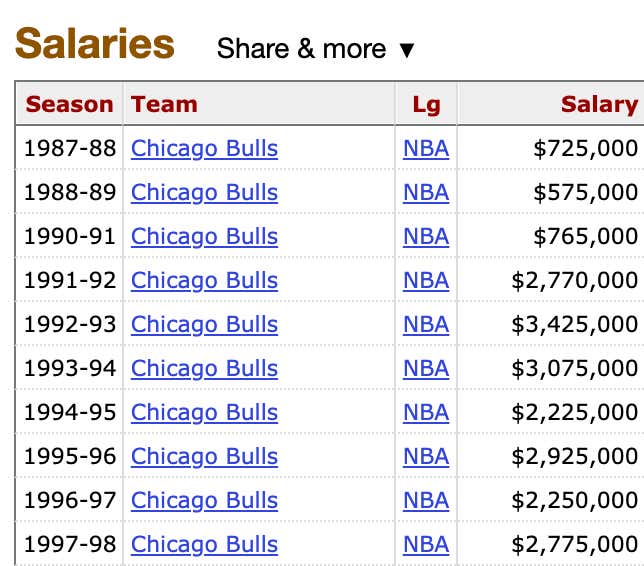 In 1998 he was the 122nd best paid player in a league of like 500 guys and the 6th highest (or lowest) paid on the Bulls depending on how you look at it. Overall a bunch of bullshit, but don't feel bad because No Tippin got paid.

Probably worth that $15m average his entire career but whatever. The man got his dollars and we're going to pretend it didn't matter MJ got 15x what he got at the height of the era. Imagine that shit happening today but don't because I don't want anyone's brains exploding. Not when we got 8.5 epsiodes left.