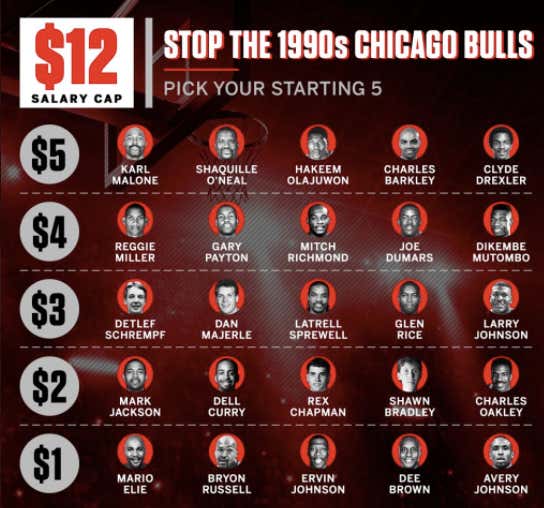 It's finally here and to get in the mood, I'm picking things for $12! Just $12, as if stopping MICHAEL FUCKING JORDAN wasn't hard enough as is. This says stop the "1990s Chicago Bulls", but for the sake of this let's focus on that Last Dance, 1997-98 team. Their closing five was:

This is a surprisingly modern lineup. Rodman is your small-ball center, Kukoc is the stretch-four and you put three excellent defenders around them. There is zero spacing here to speak of but that didn't exist until 2014 or so. Let's build our team. $12 smh. Cheapskates.

I should start with the only $5 guy to have beaten Jordan in a series. Dennis Rodman was a tremendous defender that doesn't get his credit among all-time players. Having said that, Shaq is giving him 48/22 every game on the game like clockwork. Lost in all the weird hair colors and wedding dresses, is the fact that The Worm was about 225 lbs soaking wet. Shaq may dunk him through the court.

There goes all my damn money. I go with The Glove, who made things very difficult for Jordan in the 1996 Finals. George Karl famously refused to let Payton guard Jordan until Game 4....after the Bulls were up 3-0. Tremendous.

Wonder if that would have made a difference when Jordan was destroying Seattle the first three games while George Karl twiddled his thumbs. Payton played that kind of defense while chipping in 18/6/7 on offense and while battling a calf muscle injury.

Most didn't understand the value of the three-point shot in the 1990s but it doesn't mean my team can't! Imagine Jordan's surprise when he's dominating but hasn't figured out that a three-point shot is worth more than a two-point shot. Elie had a six-year stretch where he averaged a 10/3/3 on 48/36/86 shooting and picked up three rings with the Rockets & Spurs. He was a 3-and-D type before they were common and he's another body to throw at Jordan.

Brown had a four-year run where he finished in the top half of for his position in defensive win shares. At his size (6'1, 160), I'm impressed. Brown also had five seasons where he took at least four 3PA per game and he shot between 36-40% from deep every year of that stretch. So a competent defender, above-average shooter, secondary ballhandler and that kind of athlete/dunker for $1? I'll take it.

You know I didn't want to have to do this, right? My other options were another big or a guard that couldn't shoot. No thank you. Lost in his place in history on posters everywhere, is that he hounded Jordan into shooting 43% from FG that series, 31% from 3P. The fact that he was even trusted to be in a position to get pushed off by Michael Jordan is an honor and a privilege. He had a five-year run of 12/5/2 on 45/39/76 shooting. Again, for $1 you can't beat that for another long 3-and-D option.

The gameplan is run everything through GP and Shaq. We're running pick-and-rolls to get Shaq great looks down low. Rodman is best equipped to try to stop him, but a series of switches may leave Kukoc guarding Diesel in the low post. Barbecue chicken alert.

Russell-Elie-Brown space the perimeter for Payton to kick out to when he drives the lane. The defensive trio of Jordan/Pippen/Harper is as sound as they come, and will probably stick close to my shooters…until Shaq starts requiring double teams in the low post. By my math, that should happen almost immediately. Our offense is a diet of Shaq as a roll man, Shaq post-ups, GP slashing, getting to the line and kicking out to our shooters. We're running a high pace offense because remember, Shaq is still in elite shape here. My shooters will be looking at launching 16-20 three-pointers a night.

Defensively, Payton gets Jordan. Nobody is shutting him down but he made MJ work the hardest at the highest level. Russell gets Kukoc after I see how well he did on Jordan in the 1998 Finals, one-shot aside. He's bigger than Elie and his physicality should bother Kukoc. Elie slides to Pippen and uses his quickness to stay in front of Scottie. Pippen missed 38 games to injury that year and had his worst postseason run of the championship season, 17/7/5 on 42/23/68 shooting. Dee Brown gets Ron Harper, as he wasn't much of an offensive threat by then. Shaq (who quietly made three All-Defensive teams) gets Rodman, who was another zero on offense. The gameplan is to take away every Bull but Jordan. This wasn't a great offensive team, aside from Jordan…which is like saying the Chiefs weren't a great offensive team, aside from Mahomes. Completely abandon Rodman and Harper on the premise that they can't consistently hit enough shots over seven games to beat me. We switch everything on Jordan to keep one of Payton/Russell/Elie on him, and then we concede him going off from midrange because we're playing the numbers game. He's taking 25 twos while we're taking 20 threes and Daryl Morey told me that three was more than two. Over the course of seven games, I'm hoping math wins because God knows that nothing else beat Michael Jordan.

Join us as we rewatch The Last Shot, Game 6 of the 1998 Finals tomorrow on YouTube. Subscribe below so you get it when it's live.