IT'S TIME TO PLAY BARSTOOL FEUD! GIVE IT UP FOR YOUR NEW HOST, JEFF D. LOWE! We got another good one for you today ladies and gentlemen!

Give me Will! Give me Billy! Let's go! 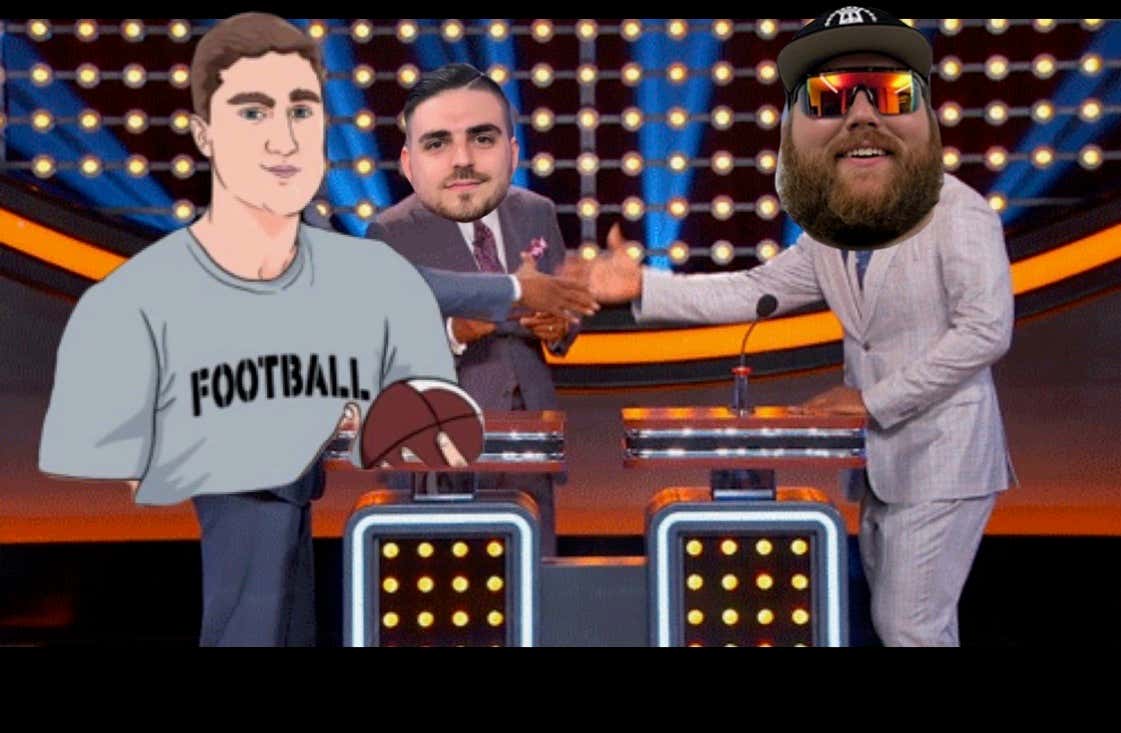 Tonight's categories included: Things that are bouncy, Things that people drink that start with 'M', and "what might grandpa be talking about when he says 'how do you turn this damn thing on?'"

*also a bonus 4th round for fun: name a piece of sporting equipment a wife might use to murder her husband.

LET'S GET IT GOING!

Hard Factor Will was quick to the first buzzer tonight, landing the number one answer on the board for 79 points! But, in a stunning turn of events and cunning display of strategy, The Hard Factor family elected to pass on the chance to play, sending things over to the PMT family.

PMT was able to knock three of the six answers off the board before putting up their third 'X' to send it back to the Hard Factor family for a chance to steal.  With bouncy ball, trampoline, bounce house, and "Hot set of knockers" off the board, the Hard Factor family put their heads together to try and take the first round.  Throwing answers like kangaroo, hair, and butts around, things looked promising but unfortunately, the guys couldn't get it done.

Round one went to the PMT family, putting them up 87-0.

Round 2 was off to a controversial start, as Hard Factor Pat buzzed in long before Hank and even longer before Jeff D. Lowe finished asking the question.  Nonetheless, Pat gave an ATROCIOUS answer, gifting the PMT family the first answer choice on the board and the chance to play.  Billy was up first for PMT and continued his impressive performance, nailing the second answer on the board.  He has not missed yet, folks! ... Big Cat, on the other hand, continued his not-so-hot streak, putting up an X for his family for the second straight time.  PMT then went a quick 1-2-3 knocking five of the remaining six answers off the board but came up short in the end.  The Hard Factor family was up to steal again but unfortunately, the guys went with the wrong mint-based cocktail, and again handed the round to the Pardon My Take family.

The final round brought Hard Factor Mark and Big Cat to the podium to answer "what might grandpa be talking about when he says 'how do you turn this damn thing on?'" After quick deliberation over who buzzed first, it was up to Mark to bring it home for the Hard Factor family.  The two top answers were fairly obvious, TV and Computer, but which was number one... Mark made the wrong choice and the PMT family won the chance to play.  They got off to a hot start, and Billy stunned the crowd yet again pulling another incredible answer out of his ass...

The PMT family couldn't get the job done after that though, and for the third time tonight, they sent things over to the Hard Factor family for a chance to steal and win the game! ... The pressure was on.  The guys needed to dig deep here and pick one of the 2 remaining answer choices for the win.  After a brief huddle up, the Hard Factor Family decides to go with Stereo, and sadly, that brought us our final buzzer of the night.

We caught up with @BillyHottakes after the show and he had this to say about his family's performance tonight and their hopes for next week.

“The boys brought the juice tonight. We got a lot of momentum heading into next week. We have professional athletes coming up next Friday and as they may be physical alphas the Pardon My Take guys are mental alphas. As mental alphas we will show them our brains are superior.”

Boy, you can really feel the heat coming from that one.  He's really looking forward to next week.

THAT'S IT FOR BARSTOOL FEUD EVERYBODY! THE PARDON MY TAKE FAMILY TOOK THIS ONE, 520 - 0!

THEY COMING BACK TO TAKE ON THE @BUSSINWTB FAMILY + VRABS ON A WINNER'S BRACKET EPISODE OF BARSTOOL FEUD… I'LL SEE YA NEXT TIME!