A lot going on there. Not going to lie. For some reason my gut tells me this took place in rural Pennsylvania. Something about it feels very Amish. Regardless, it's a hell of a video. Two dogs chasing a Goddamn cow directly into the pool only to have a cowboy come and save the day with arguably the greatest lasso of all time. He was right on the money. Look at that placement... 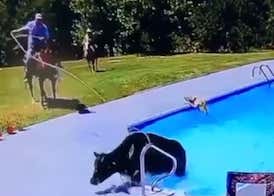 Good thing the owner came out otherwise the dog would've drowned. I've always found it fascinating how dogs can go from pet to animal in the blink of an eye. Like that thing was laying in a sun spot fully domesticated and the second it saw that cow it became a master herder. Crazy.

The actual chase reminds of this show 'Mantracker' they used to have on Discovery. They would send two people out into the woods and this guy Terry Grant would hunt them on his horse. The goal was for him to intercept them before they got to a predetermined location. It was awesome. The guy was more connected to his horse than Jake Sully in Avatar. I put an episode below for you to watch if you get a chance.

Have a great weekend.