From mega-corporation supermarkets to local grocery shops, stores are struggling to keep many items in stock. First, it was the toilet paper craze that settled over in the early going of the outbreak. Then it was the cleaning supplies from sanitizing wipes to hand soap. A new hard-to-find item now happens to be frozen pizza. Stores across the states are finding it hard to keep the easy-to-cook products in stock.

Newman's Own President and COO, Dave Best told Ad Week that his company's sales are 190 percent since the start of the pandemic. It shouldn't come as a surprise that this particular food item is seeing its demand on the rise. As everyone remains in quarantine, food has become a difficult thing to keep aplenty. There are people rationing their food and those who are going the other way and buying in bulk that can last them months. With so much uncertainty as to when normal life will be restored, easy-to-grab foods like frozen pizza, especially with a shelf life like they have, are hot ticket items.

Okay now is time to officially panic. Toilet paper shortage? Bad. Hand sanitizer/soap running out? Troublesome to say the least. No more frozen pizzas? Doomsday. We will not recover as a nation if we run out of frozen pizzas. I mean what else do you expect me to eat? Taking a quick dive into my health these days, I eat about 3-4 full frozen pizzas a week and the number might be higher if we're being honest. Frozen pizzas have become essential items and grocery stores are beginning to limit how many you can buy with each visit.

They're my go-to up at 1am or later meal that really puts me into that food coma and knocks me out. My dog can't even look me in the eyes anymore with what I've become.

Now is there someone to blame for this tragedy? Possibly someone with the internet power and influence to command an entire nation? A mad man evil genius who truly never understood his capability? 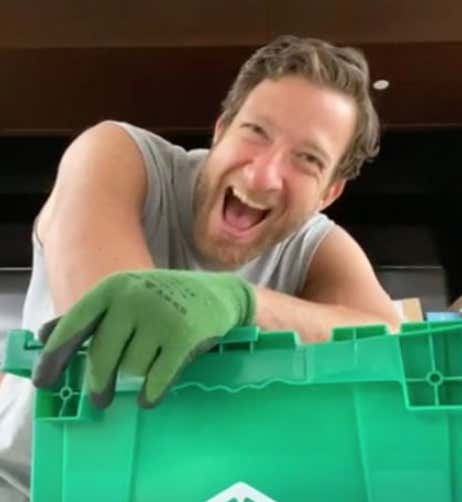 Yeah it's probably my boss Dave Portnoy's fault when you really think about it. Dave got so many people hyped up on frozen pizzas once quarantine started that the whole country went out at once and bought them all. Now we're about to run out. The article this story is from even mentions him as a sign the product has become some popular in the recent weeks. Well no shit.

With frozen pizza coming to the forefront, even Barstool Sports is placing an emphasis on the freezer good. Dave Portnoy, the founder of the site, has delivered his readers with a consistent stream of pizza reviews over the years. Typically, he visits shops across the country where he takes just one bite of a slice and gives his rating. With America shut down and Portnoy in quarantine, he's now resorted to doing this with frozen pizza, which is just another example of how the product is becoming so mainstream.

It's not his fault, but it is at the same time. I honestly forget what frozen pizza was until Dave started doing these. Now I'm addicted. The pizza around my hometown in Jersey absolutely blows. FPs are all I have. Please just make more United States. This now proves Dave has the power to command an entire nation which is pretty awesome and terrifying at the same time.

Now if you'll excuse me, I'm going to go make a Tree Tavern pizza and eat in silence. Treasure each and every bite. You never know which will be your last.