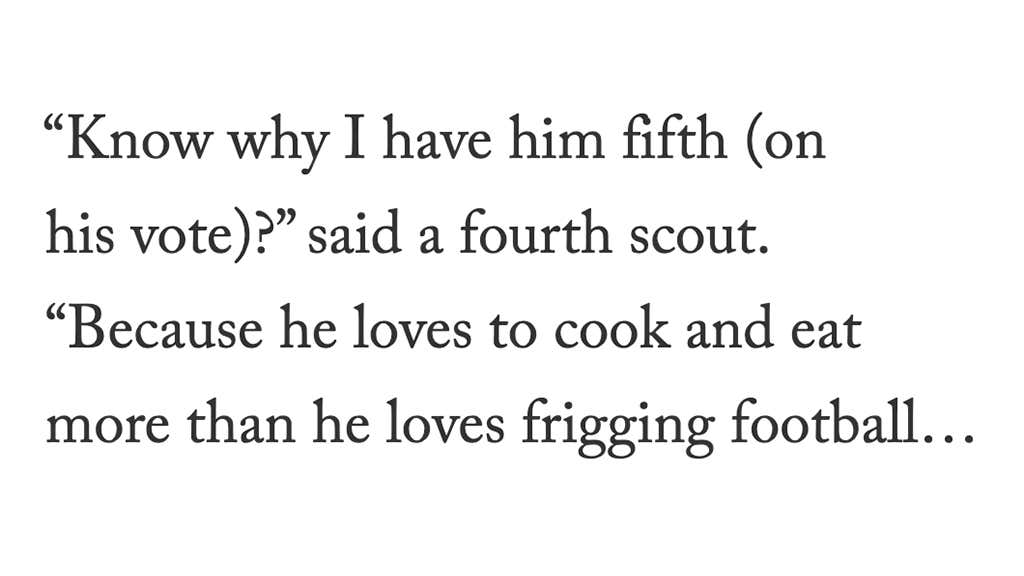 Anonymous Scout Quote Season may be my favorite part of the lead up to the NFL Draft. After all the game film, workouts, Wonderlics, and interviews take place, we get the last few and usually most preposterous red flags raised before a pick is actually made after all that scouting. Did a kid play video games too much in college? Did he not play ENOUGH video games in college? Did he only play solo RPGs instead of Madden which shows he is way too much of an independent thinker instead of a #FootballGuy?

The thing is I get what this scout is saying (I have no doubt in my mind that this anonymous scout is real after seeing that quote end in "frigging football". Every scout says "frigging football" when they are angry about a player not respecting the game). Anytime you draft a man mountain that's 350+ pounds, you want to make sure he doesn't hit 400+ pounds. If that kid loves to eat more than getting in shape to block some of the biggest superfreaks on the planet, that's a problem. Trust me, I had Eddie Lacy as a keeper in my fantasy football league and watched any chance of a championship go up in flames with every China food order.

But I think we have to give Mekhi Becton some credit here. You know how hard it is to find a 20-year-old that enjoys cooking that much? Especially one that is in college? If Mekhi Becton spent his days at Louisville participating in the Papa John Challenge and trying to eat 40 pizzas in 30 days, that's a problem. But Mekhi having a life skill at 20 I'm pretty sure 90% of my blogging brethren here at Barstool don't have and knowing exactly what is in the food he's eating is actually a positive in my scouting report. Plus it's okay to like one or two or even 100 things more than your actually job including eating, especially if this is the performance your hog molly body turns in at the Combine.

Also, to be clear, not knowing how to cook is clearly not an indicator of future NFL stardom either.

Reminder: The Giants passed on a future Pro Bowl Left Tackle to draft that kid with no life skills after a video of the Left Tackle smoking *gasp* marijuana in college leaked right before the draft started. Fuck everything