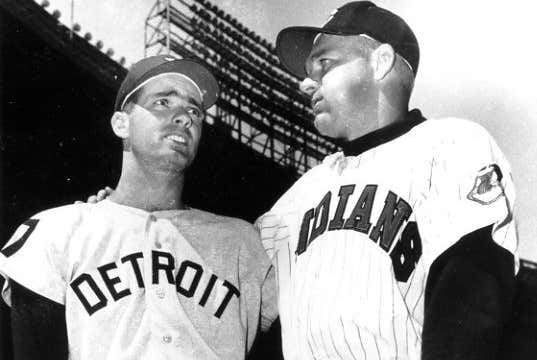 In a blockbuster trade before the start of the season, the Cleveland Indians send Rocky Colavito to the Detroit Tigers for Harvey Kuenn. Colavito had led the American League in home runs with 42 in 1959, while Kuenn was the leading hitter with an average of .353. The trade was especially unpopular in Cleveland and was blamed for their struggles for the next 35 years.

Born in the Bronx on August 10, 1933, a high school dropout, Colavito had played semipro baseball since he was nine. On January 1, 1951, the Indians scooped in and signed him under the nose of the Yankees. After making his debut in 1955, Rocky Colavito quickly became a fan favorite in Northern Ohio, finishing second in Rookie of the Year balloting in 1956.  A slugger at heart, Rocky Colavito closed the 1950s with back-to-back 40 home run seasons, including a league-leading 42 in 1959.

Harvey Kuenn was born on December 4, 1930, in West Allis, Wisconsin. After playing baseball at the University of Wisconsin, Kuenn signed with the Detroit Tigers in 1952, making his debut in the same season. Named Rookie of the Year in 1953, Harvey Kuenn became a quick fan favorite in Detroit. A perennial All-Star, Kuenn was among the American League’s top hitters in the 1950s, winning the batting championship with a .353 average in 1959.

The Cleveland Indians had been competitive in 1959, finishing five games in back of the Chicago White Sox for the American League Pennant. General Manager Frank Lane, a man with a reputation for making quick moves, was not satisfied. On the eve of the 1960 season, he made a blockbuster move sending Rocky Colavito to the Detroit Tigers for Harvey Kuenn.

Rocky Colavito continued to slug the ball in Detroit, hitting a career-high 45 home runs in 1961, as he made two All-Star appearances in four seasons with the Tigers. Harvey Kuenn was an All-star and hit .308 in 1960, but was never embraced in Cleveland and traded on to the San Francisco Giants following the season. Colavito would return to Cleveland in 1965 after spending 1964 with the Kansas City Athletics.

The Rocky Colavito trade would begin an era of misery in Cleveland as they would spend the next 35 years wallowing in baseball purgatory as they never finished closer than ten games from first place. This led to a belief that Rocky Colavito may have put a curse on the Cleveland Indians. Even when Colavito returned to Cleveland, it came at a high price as they traded prospects Tommy John and Tommie Agee away.

Over the next three decades, the Cleveland Indians saw prospects flame out, and significant name acquisitions turn into busts. This included players like Sam McDowell, who appeared to be on the verge of becoming a superstar, only to lose the ability to throw strikes and Joe Charnobeau, who after winning the Rookie of the Year in 1980 quickly flame out.

It was not until 1994, did a pennant race return to Cleveland, but the strike ended the season, with the Tribe sitting at 66-47 one game out of first and leading the Wild Card. One year later, the Indians went all the way to the World Series, ending their 35 years of suffering.