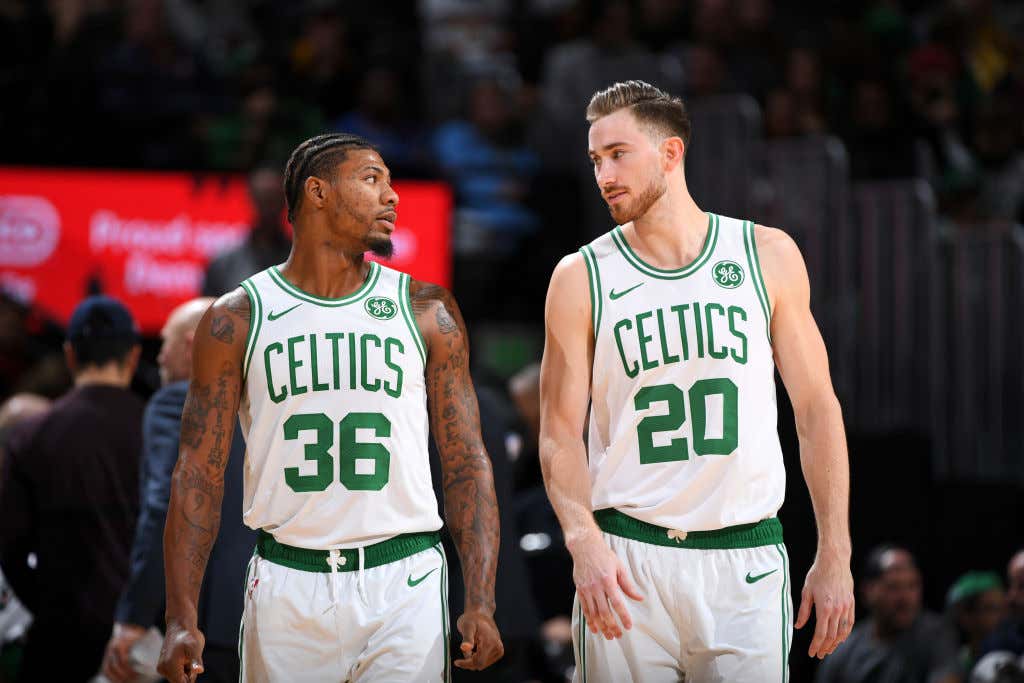 It's not a new concept that NBA players want to be rappers and rappers want to be NBA players. Some are better than others (Damian Lillard), but today I want to talk about a lyrical showdown between two Celtics. Maybe you've heard one of these songs before, maybe both will be new to you. With no games to actually talk about why not spend some time determining who had the better song between Marcus Smart and G Time (Gordon Hayward)? We'll keep this pretty simple, I'll put the song in and judge it with a GIF. Let's dive in.

This came out once Marcus signed his $52M extension in 2018. Remember when people said that was an overpayment and Danny Ainge made a mistake? Pretty much the norm every time he reaches one of those with a player and it's proven to be a steal every time. Rondo, Avery Bradley, Marcus Smart, Jaylen Brown, maybe we should just trust him when it comes to that shit.

I can't decide if this is truly horrible or if it's so bad it's actually good. If you asked me to try and describe what it would be like to hear a young G Time try and rap I feel like this is pretty spot on. If you didn't know about this, here's the backstory

“It was the little break right before March Madness started [in 2010]. We were just chilling in [Hayward’s] parents' living room and, for whatever reason, we decided to make a rap song,” said Calderon. “We made it in the span of maybe like an hour and a half, and it was just easy to edit it and stuff. And who knew it would have blown up that big right before March Madness?”

Reflecting on the track a decade later, Calderon admits Hayward steals the show, coming with strong verses after Calderon and Golubov.

“It's the kind of thing Gordon was good at,” said Crosby. "I feel like, if you looked at him, you couldn't tell, but he was talented at everything. I remember he'd beat us in ping pong, he'd beat us at pool, he played tennis, and then he can make funny rap songs. I don't know if there wasn't anything he couldn't do.”

Without missing a beat, Hall added, “[Rapping is] probably what he's least good at, in my opinion. But he’s so good at everything else.”

but let's be truthful here. This is Marcus Smart in a bloodbath. Thankfully though neither decided to go into music as their profession of choice. Much better decision to just do this instead