I really want this painting. I think if I got super rich, like rich enough that I couldn't tell if $10k was taken out of my bank account, it'd be the first thing I bought. I don't know how much money I'd need to pay $10k for a painting though. I usually hate art, but this blue dog that I first saw when I went to New Orleans to clean up after Katrina has always stuck with me. Here I am putting up dry wall. 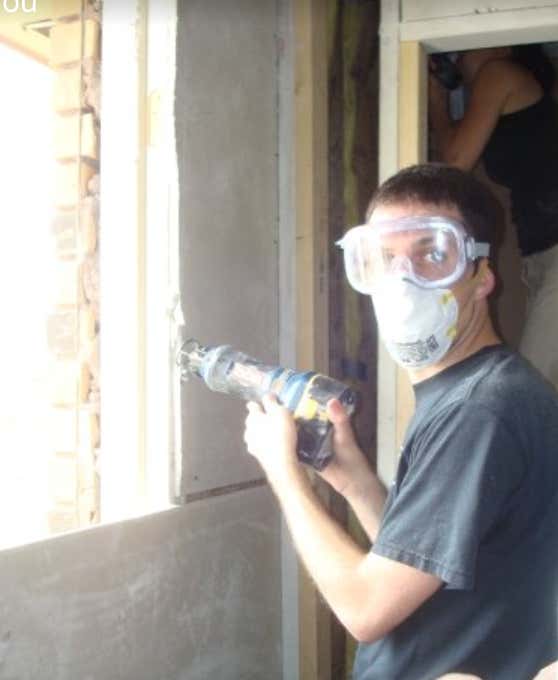 I just love it (the blue dog...and having hair) so much. They're SO expensive though. I bought this painting of DC for $500 and it was worth it for sure. I mean yeah $500 sounds like a lot but I get to have it the rest of my life...and I've always blasted off $500 in gambling in 2 minutes more times than I'd like to admit, so when you think about it that way, $500 for a lifetime of a painting is pretty good value.

The artist does a lot of cities and also stadiums which I think are great. Here's the link to his website:

(For some reason it won't embed so it's https://www.michaelbirawer.com/)

I do need more art for my apartment though that isn't super expensive like the blue dog. Maybe Chillin With Chels can paint me something? How much does she charge?

Also if you or someone you know is an artist with cool stuff, tweet it at me. Need it.

Now for some of your questions:

Wish I knew! We put out a great podcast every week and everyone who listens says it's great, so we're just going to keep doing it and not worry if it's officially green-lit and promoted by Barstool. I think it's just because *I* do it.

Good question. I wanted to start having bands come into the office and play songs, and I thought Marc from OAR would be a good starting point because he lives in NYC and we both are friendly with Cakes from the Junkies. So I hit up Marc, he asked around about Barstool (this was a couple of months after we moved the company to NYC, so still pretty small potatoes at that point) and he agreed. We did the original Nate at Night video, Marc loved the Barstool vibe, we stayed in touch, had the full band come in, and it just went from there. All the guys are the nicest dudes in the world. Like, it makes no sense how kind and generous and compassionate they are. They let me tag along for a west coast swing - Oregon to Wine Country CA to the LA area (shout out Mike, Colleen, and Vibez) for 3 straight nights of shows. Just because they are that nice of people. I'll never be able to express the gratitude I have for them.

That's…that's the entire point. I'm "not allowed" to do a Periscope to interact with the people anymore (by the way, I hate the word "fans". Maybe it's because I never envisioned being a Z-list celebrity to begin with, but the word "fans" has always rubbed me the wrong way. I'm just a guy who blogs. I love that people appreciate my work. Fans has always been a weird word to me. I don't know.) so I now answer questions in the 2pm blog. It's a pretty simple concept. But also, leave it to someone who tattle-tales on Twitter to not grasp something so simple.

No but I think companies will start saving a ton of money by letting more employees work from home. Why pay for office space when you can do everything from home and on ZOOM? This will save companies a tonnnn of money, but also bring down office real estate prices so much that it might end up being a never ending circle. But this quarantine will definitely start the wave of making working from home way more acceptable. Technology exists. There's no reason to commute to a fucking city every day.

This was the best 2pm blog yet. See you back here tomorrow. Bless.