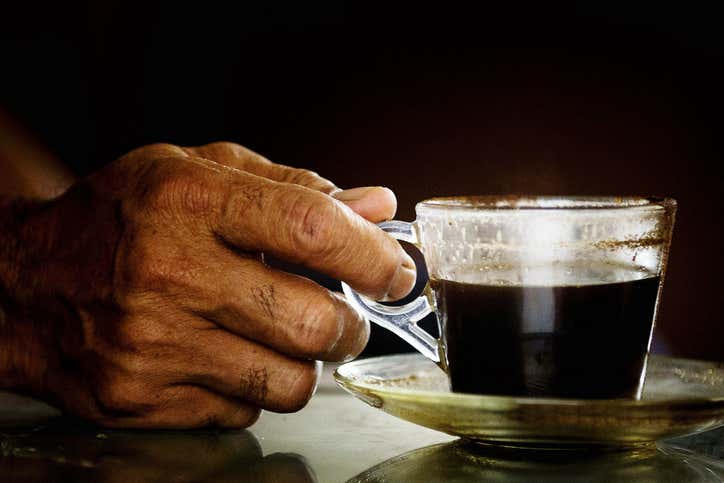 Truth be told, I made the switch to strictly black coffee like at least 6-8 months ago. But I totally forgot that I wrote this blog back in August 2018 about trying to become a black coffee guy...

...so I figured it was time for an update. And after months and months of trying to not relapse into throwing some cream and sugar into my morning joe, I can officially announce that I am now Team Black 4 lyfe. And now I can't even seem to remember what life was life before making the switch.

Chances are you're probably making a lot more coffee at home lately during this quarantine since it's not exactly easy to go out and spend all of your money on an overpriced cup from a coffeeshop these days. Now in my past life as a cream guy, there is almost no feeling in the world that was worse than brewing up a cup of coffee only to realize you forgot you were out of creamer. Maybe that's a little dramatic but it ruins your entire day right from the start. It's like pouring out a bowl of cereal only to realize you forgot to get milk and now you're stuck eating dry cereal for breakfast like a peasant. But when you're just ripping your coffee black, you never have to worry about that. Not even one time. Never again does your day completely suck ass less than 20 minutes after waking up. So right away, that's 1-0 black.

Now away from quarantined life, I'm able to admit that there's a feeling of superiority when you're taking your coffee black. Like when you're out for breakfast and the waiter/waitress asks if you want any cream and sugar for your order of coffee. There's a sense of pride that comes with announcing to the entire restaurant that you do not care for cream nor sugar because you are a big, strong masculine man who takes his coffee like he's off to work a 20 hour day mining for coal.

And yes, I'm sure that a real man simply wouldn't give a shit about what anybody else thinks about him. But a real man can also change a tire with ease and I'd have to call AAA. So I'm still boy enough to admit that I'd like to just put on the show of appearing like an actual man, ya know?

Either way, here is what I said 2 years ago as I first embarked on this quest.

I made it through to the other side. And if I could do it, then so could any of you out there who are also looking to make the switch to Team Black. I believe in you.

Sidenote: Get yourself a coffee grinder and pick up some quality beans. If you're going to make the switch to black coffee, you don't want to be forcing down some Maxwell House. No free ads but La Colombe absolutely rips.