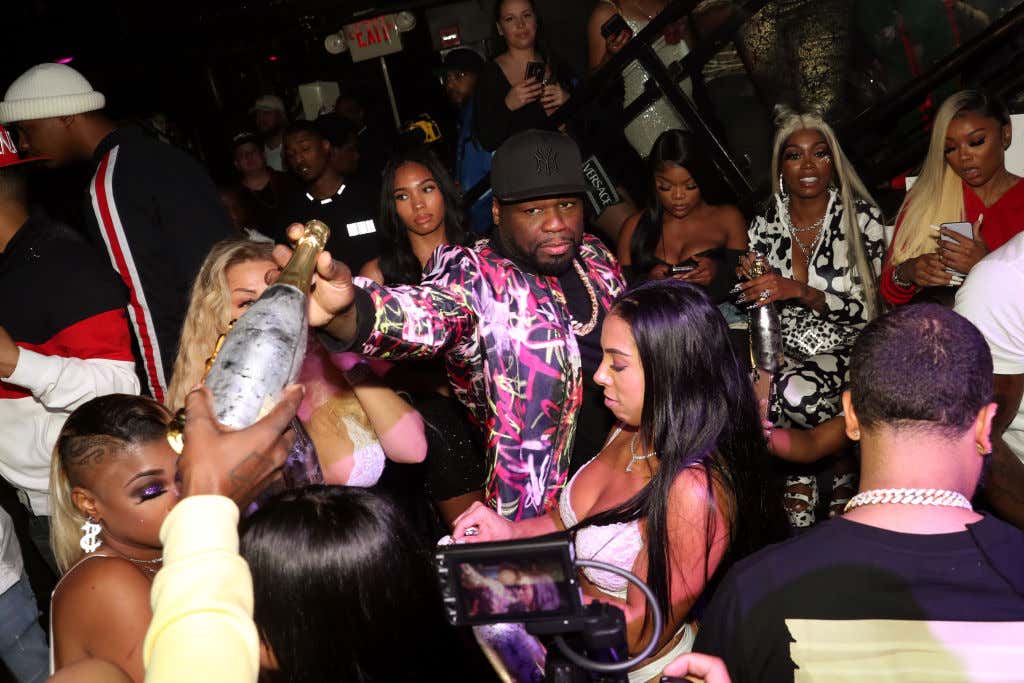 NYP- 50 Cent somewhat surprisingly says that he doesn’t drink his own champagne when he’s out partying — instead switching it out for ginger ale. The rapper says in his new book, “Hustle Harder, Hustle Smarter,” that he doesn’t drink a lot because he likes to keep a clear head. But he still has to promote his various lines of liquor. So he has a routine when he’s out with friends drinking his Chemin du Roi bubbly.

“First I’ll pour drinks from a bottle of Champagne for everyone who is in VIP with me. When the bottle is empty, I’ll give it to one of my guys and have him quietly refill it with ginger ale,” he writes. “For the rest of the night I’ll have that bottle in my hand. I’ll take swigs every now and then just to keep the vibe right, but I’m not drinking anything but Canada Dry.”

Similarly, he says he had a dilemma at a recent party in New York when Snoop Dogg offered him a joint. “Everyone around us started cheering for me to hit it. Not wanting to kill the mood, I took a big hit … and then just let the smoke swirl around in my mouth before I blew it back out,” he writes. “That’s as far as it went. Bill Clinton has probably inhaled more weed smoke than me.”

Yeah sure I'll keep talking about 50 Cent. The more 50 Cent stories the better in my opinion. In a world where there's very little news, or good news I should say, I will talk about my favorite rapper all day every day. Curtis has provided us with a couple stories over the last couple of days. First there was the hilarious hit-for-hit battle challenge by Ja Rule that Fiddy quickly declined and now there's this story about how 50 Cent doesn't drink and fills his champagne bottles with ginger ale.

This story about champagne bottles filled with ginger ale might surprise some people but not me. As a 50 Cent stan going on 17 years now, I know just about everything about the man including the fact that he doesn't drink. He has a negative outlook on alcohol because he grew up around alcoholics and never wanted to be like that. But none of that stops him from investing in the various alcohol companies because, at the end of the day, he's a business man and alcohol is gooooooooood business. So break out the Canada Dry because it's time to party.

50 Cent doesn't smoke weed ,either. It confuses people because on the greatest album of all time, Get Rich or Die Tryin', he has a song called 'High All The Time' where the premise of the song is about how he's, you guessed it, high all the time

But hey, that album came out in 2003 and, by the end of that year, it had sold 12 MILLION copies so it's safe to say he knew what he was doing.