Use of the peach and eggplant emojis, stand-ins for female and male genitalia, also increased seeing a 46 percent spike.

Self-isolation and quarantine can lead to more sexually aggressive behavior on social media as a way to relieve stress, Dr. Helen Fishe.

“The truth is that quarantine adds stress,” Fisher said. “Stress tends to trigger the ‘fight or flight’ response. This elevates testosterone in both men and women, and elevated testosterone then triggers the production of norepinephrine and epinephrine — natural stimulants that produce energy, focus, motivation and sexual arousal.”

Hopefully this helps everyone get prepared for their first non quarantine fuck when this is over. It's never too early to start sending those text messages, girls included. At this point I will now request reader emails from anyone with a noteworthy personal situation looming when this ends. Like you got busted cheating the day we got put on lockdown and your girl is going to murder you the second she sees you. Stuff like that gets my attention, and while I still have yours, can you help me answer a question?

Do you need a huge dick to use the eggplant emoji?

I'm wondering because obviously I don't have a huge dick but also because I just missed out on the emoji update to getting laid. I think that went mainstream mainstream around the same time my now-wife asked the fateful "So.... what are we?" question. Consequently I have zero experience when it comes to emojis as a means to pussy. My general understanding is that eggplants fly willingly and frequently with reckless abandon 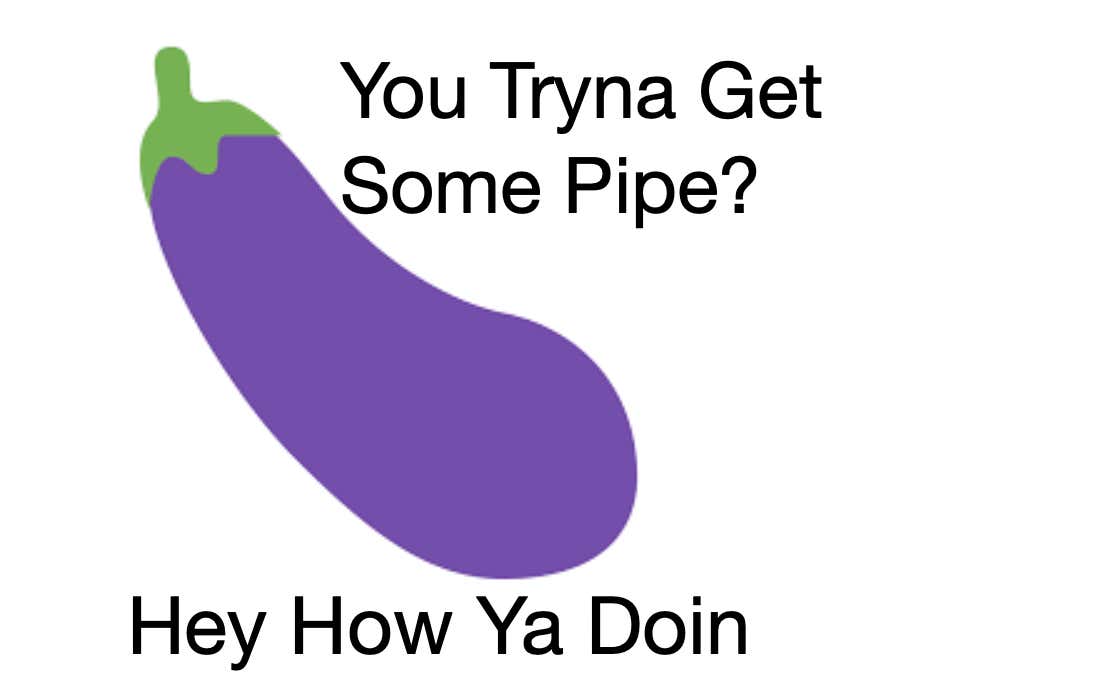 A big part of me feels like that's unfair. If you're packing eggplant level dick you should get your own emoji. And it's also not fair if you show eggplant but pack pickle. The whole thing is doomed from the start so I feel like varying degrees of eggplant level of emojis are more appropriate. But then I guess you start getting into discrepancies like is that guy really 5'7 or is he 5'9.5 like he says out loud? Is his dick a stalk of corn or is it more banana? You see things can get complicated pretty quickly so let's keep it simple and agree that nobody slings eggplant like Vin Dog