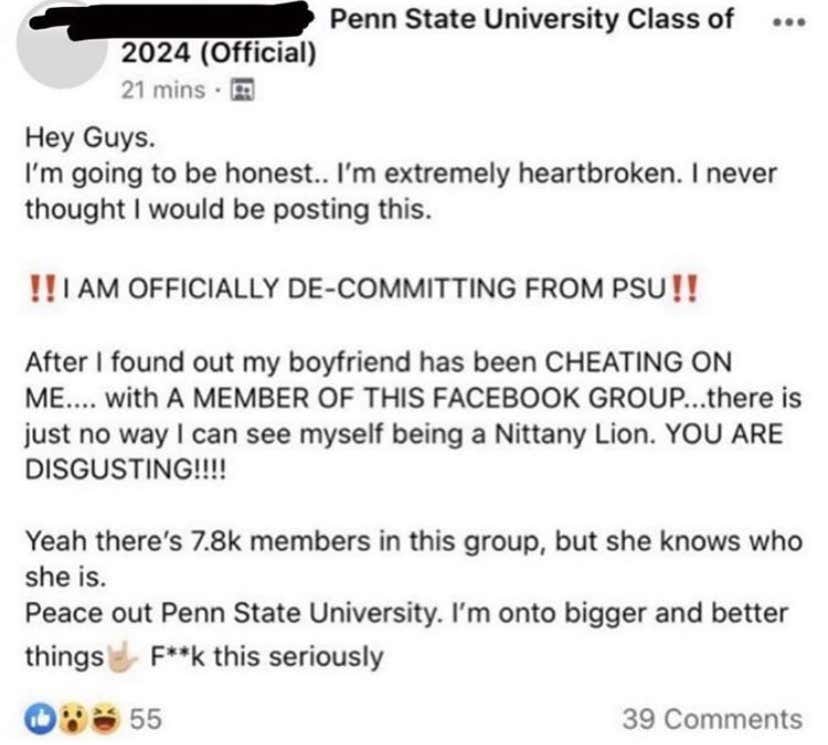 Lot of people will say it's tough to blame 7,800 people in a Facebook group and 46,000 students at a university for one (1) of those female students fucking your boyfriend's brains out. Guess those people have never been cheated on. I mean that shit sucks dude. What the fuck are you supposed to do. Be calm and composed? Make rational decisions? What the fuck? You go scorched earth. You let all that anger in the moment erupt like fucking Mount Vesuvius and take every last fucking person down with you, you don't bottle it up and hold it in so it slowly turns into resentment and white hot rage for the next decade before you fucking snap. That's how a homicide happens. Read a self-help book one time.

And I mean....come on. Are you gonna make me say it. I've tried to leave the past in the past but you're kind of forcing my hand here. I guess all I'll say is that some people think that corruption (i.e. bribery, embezzlement, deep throating a taken dude's dick etc) is environmental, a "decline of personal ethics" developed by downplaying perverse conduct in the past, not to mention the principle that little power of decision within organizations to penalize acts of corruption to set examples creates an environment conducive to perpetuating corruption?

Like to put it more simply, a basic cause of shitty behavior (i.e. getting bent over your bed by a dude just finishing up his FaceTime with his girlfriend) is by being in a cultural environment that condones shitty behavior — such as defending or even ADMIRING shitty, corrupt people, or rationalizing false arguments with no moral basis.

I dunno. Read that somewhere, sorry, I read. Just saying in this Facebook girl's defense it's not like, TOTALLY out of line to blame the entire Penn State campus for her man ending up balls deep in someone who wasn't her.

Just KIND OF out of line.