Here I was, minding my own fucking business. Raising my daughter, trying not to die from the Rona, and then my phone went off. "A text message?!" I exclaimed to myself, "What a lovely treat to be thought of. A friendly note from a pal during these trying times in human history." As I lifted my phone to see who was trying to exchange communication with me, glee filling my moonpie face, I read a name: Dana. My glee quickly fled as I grew increasingly curious. Dana rarely if ever texts me as a pal, shooting the shit. This is a man who only comes to me with his hand out in demand of something. A real panhandler of a message sender. But, I gave him the benefit of the doubt. The last time we spoke was just a few days prior, during the marathon Mush Madness which took north of 17 hours to complete. Knowing good and well there is yet another #MushMadness tonight, I was thinking perhaps he was reaching out in hopes that I would join their stream yet again to provide my patented keen insights and sharp-witted commentary. Fucking NOPE. 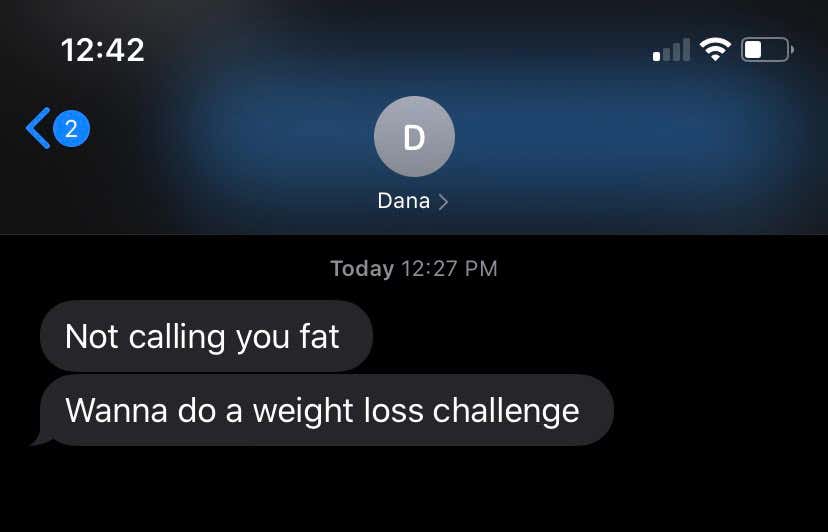 "ASSAULT! ASSAULT!" I decried, alone in my bathroom. Now listen, I'm a realist. I own several mirrors. I know what I look like. Do I have the body of an Olympic athlete? Absolutely. Shot putters, retired swimmers, things of that nature. Could I drop a couple pounds and look like some of the athletes from the sports people actually watch? For sure. But I'm nowhere near, "First person you call when you need a fatso for content." Nevermind the fact that Dana has already publicly challenged me in a different arena, 1-on-1 basketball. Of which I already publicly accepted and he's since cowered away from. Dana's lucky we live in modern times because in a different century he would have been playing it entirely too fast and loose with challenging bandits to duels not realizing you can't unchallenge a man to a duel. "Founder of Zillion XXX Whiskey Dead By Six Shooter" would have been the title of his obituary. "Left his gun at home, actually had a banana in his holster" the first sentence would have read.

So again, he's lucky we don't live in the Aaron Burr era. But that doesn't mean this disrespect should go unpunished. What kind of a man would I be to sit here and allow this trash heap to jiggle my love handles publicly? A sad excuse for a man, that's what kind. So I'll leave it up to the people, should I give him the ol' head-body-head-body or should I dial up my pals over at the ACME factory for some TNT and a mallet?

My gut reaction says mallet but I don't want to act too hastily here, I just demand justice for his wrongdoings on this fine Wednesday afternoon.