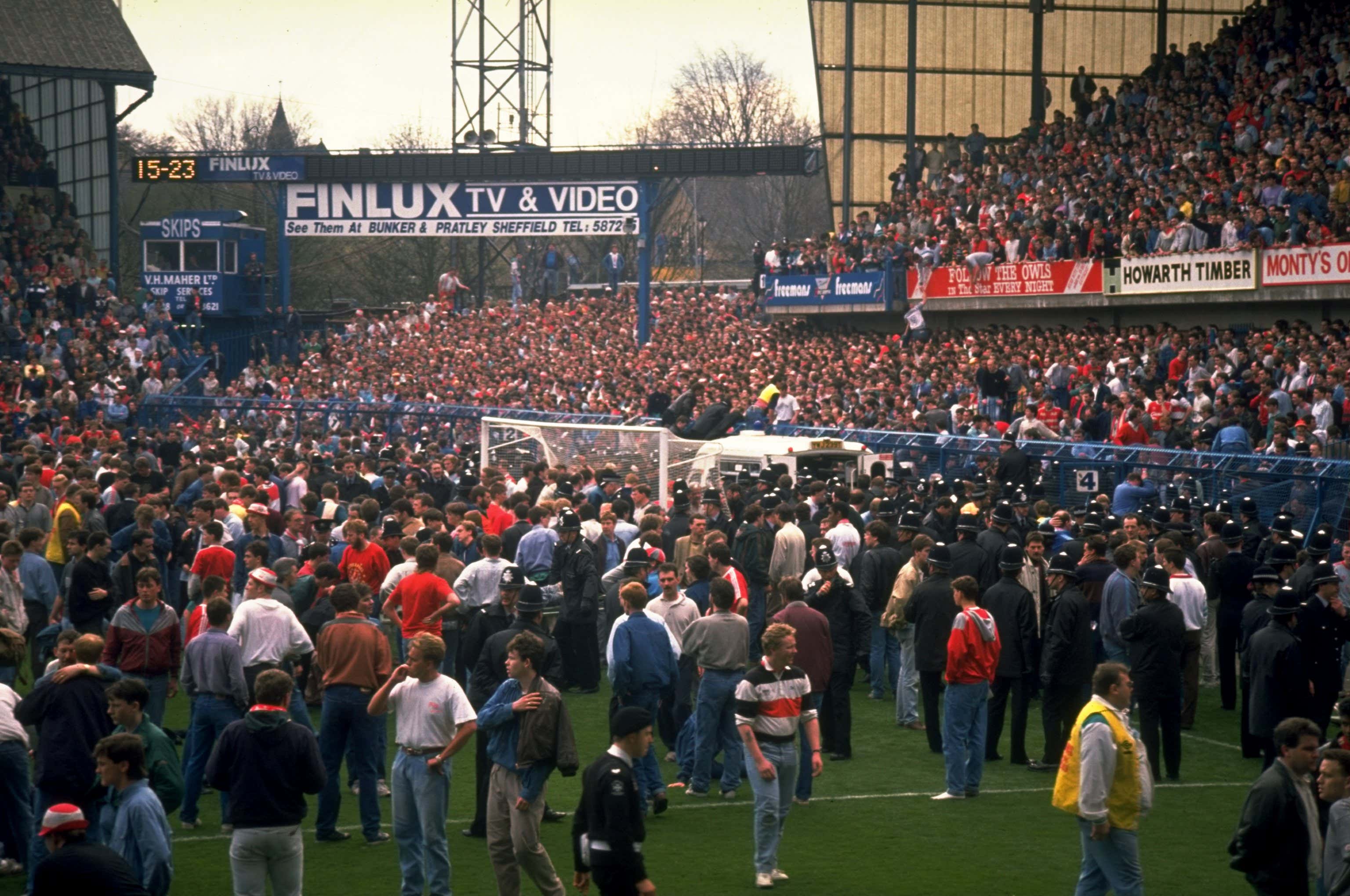 (Fans are crushed against the barrier during the FA Cup semi-final match between Liverpool and Nottingham Forest. Photo Credit: David Cannon/Allsport)

NOTE: The following is NSFW, and honestly difficult to write about despite being 30 years ago. If you are at all squeamish, you have been warned. Also, there is still a lot of scars from this disaster still prevalent in the U.K. today

During the beginning of an FA Cup semi-final between Liverpool and Nottingham Forest, two standing-only central pens allocated to Liverpool supporters became overcrowded, and a disastrous crush ensued.

Shortly before kick-off, in an attempt to ease overcrowding outside the entrance turnstiles, the police match commander David Duckenfield ordered exit gate C opened, leading to an influx of even more supporters to the pens. This led to a crowding in the pens and a crush. With 96 fatalities and 766 injuries, it remains the worst disaster in British sporting history.

Although Liverpool had more supporters, Nottingham Forest was allocated the larger area, to avoid the approach routes of rival fans crossing. As a result of the stadium layout and segregation policy, turnstiles that would normally have been used to enter the North Stand from the east were off-limits and all Liverpool supporters had to converge on a single entrance at Leppings Lane.

Outside the stadium, a bottleneck developed with more fans arriving than could be safely filtered through the turnstiles before 3:00 pm. Fans outside could hear cheering as the teams came on the pitch ten minutes before the match started, but could not gain entrance. A police constable radioed control requesting that the game be delayed, to ensure the safe passage of supporters into the ground. The request to delay the start of the match by 20 minutes was declined.

With an estimated 5,000 fans trying to enter through the turnstiles, the police opened a large exit gate (Gate C) that ordinarily permitted the free flow of supporters departing the stadium. Two further gates (A and B) were subsequently opened to relieve pressure. After an initial rush, thousands of supporters entered the stadium. 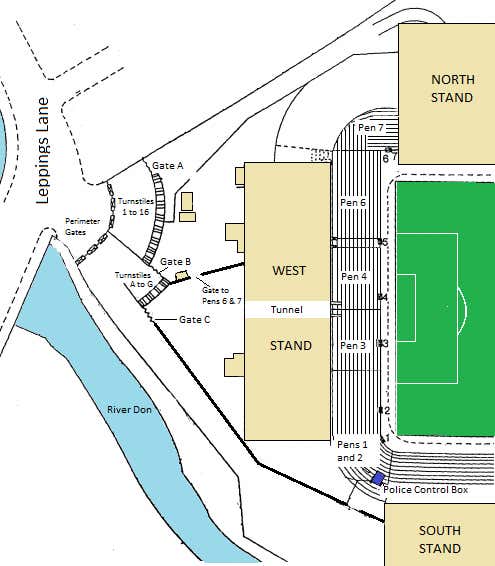 When the gates were opened, thousands of fans entered a narrow tunnel leading from the rear of the terrace into two overcrowded central pens, creating pressure at the front. Hundreds of people were pressed against one another and the fencing by the weight of the crowd behind them, but people still entering were unaware of the problems at the fence. Police usually stood at the entrance to the tunnel, and when the central pens reached capacity would direct fans to the side pens. On this occasion, for reasons not fully known, they did not. 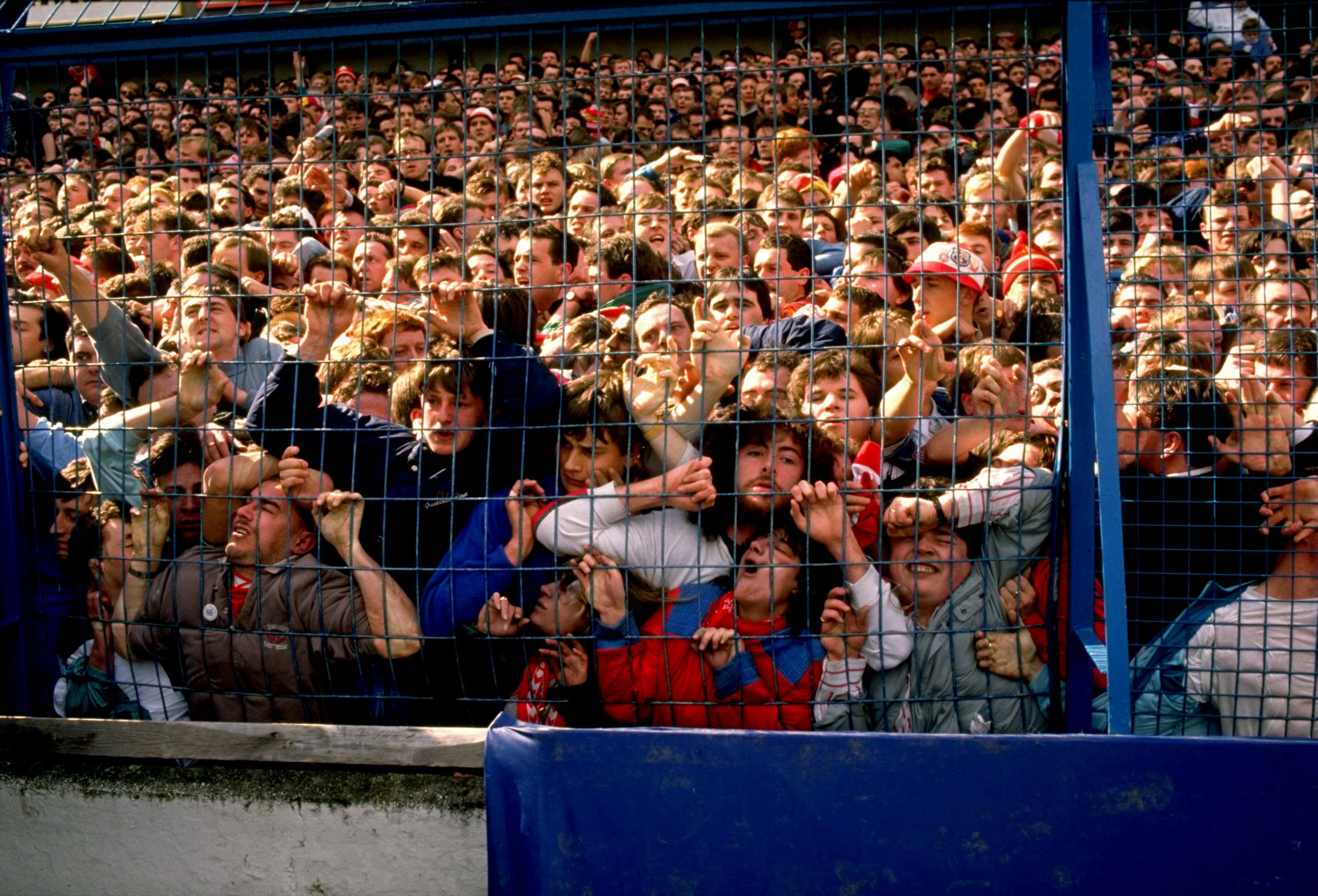 As the match began, problems at the front of the Liverpool central goal pens went largely unnoticed except by those inside them and a few police at that end of the pitch. Liverpool's goalkeeper, Bruce Grobbelaar, reported fans from behind him pleading to him for help as the situation worsened. The police at first attempted to stop fans from spilling out of the pens, some believing this to be a pitch invasion. At approximately 3:04 pm, a shot from Liverpool's Peter Beardsley hit the bar. Possibly connected to the excitement, a surge in pen 3 caused one of its metal crush barriers to give way. 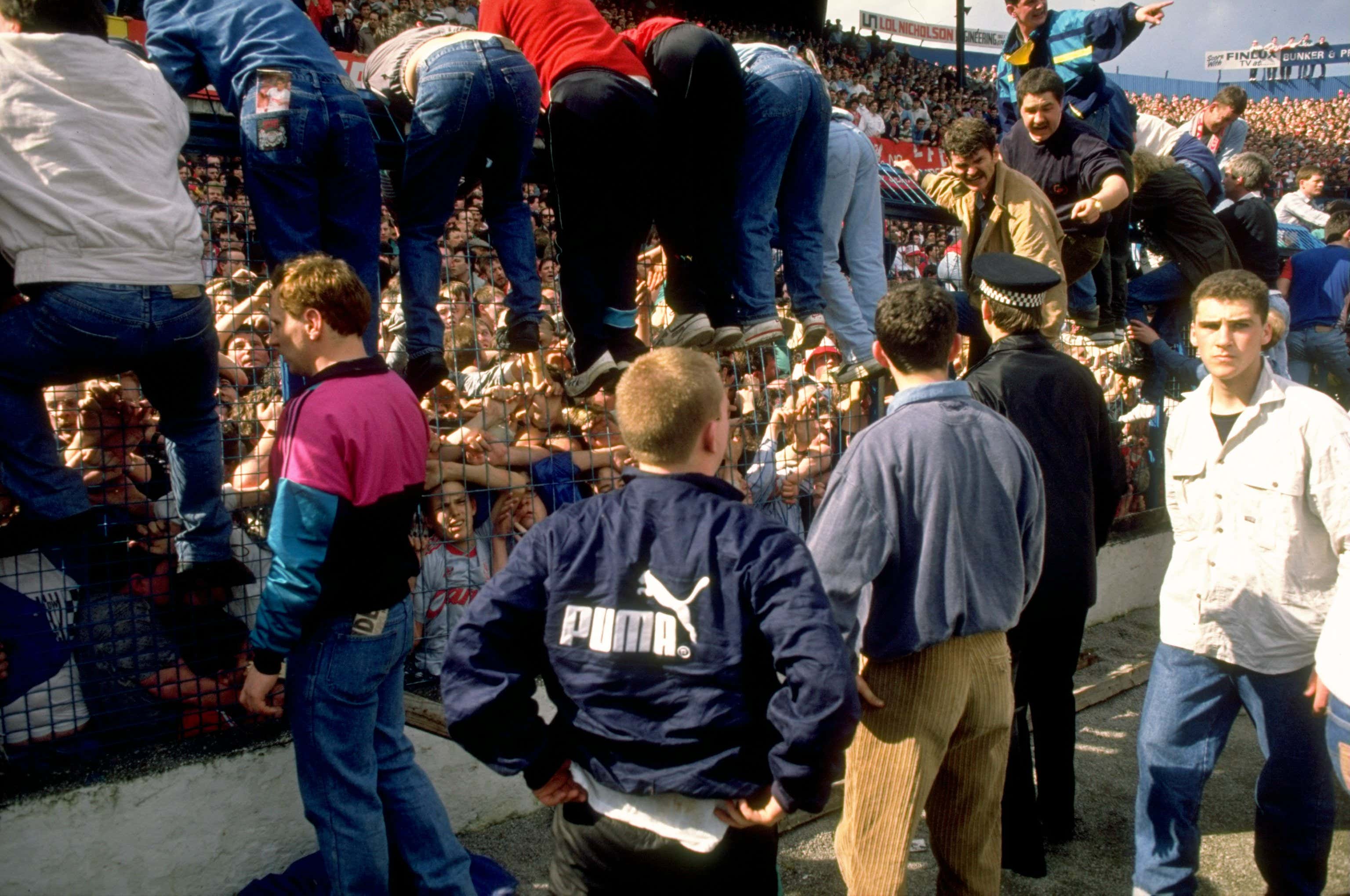 South Yorkshire Police Superintendent Greenwood realized the situation, and ran on the field to gain referee Ray Lewis's attention. Lewis stopped the match at 3:05:30 as fans climbed the fence in an effort to escape the crush and went onto the track.

By this time, a small gate in the fence had been forced open and some fans escaped via this route, as others continued to climb over the fencing. Other fans were pulled to safety by fans in the West Stand above the Leppings Lane terrace. The intensity of the crush broke more crush barriers on the terraces. Holes in the perimeter fencing were made by fans desperately attempting to rescue others.

The crowd in the Leppings Lane Stand overspilled onto the pitch, where the many injured fans who had climbed to safety congregated. Football players from both teams were ushered to their respective dressing rooms, and told that there would be a postponement. Those still trapped in the pens were packed so tightly that many victims died of compressive asphyxia while standing. Meanwhile, on the pitch, police, stewards and members of the Ambulance service were overwhelmed. Many uninjured fans assisted the injured; several attempted CPR, and others tore down advertising hoardings to use as stretchers. 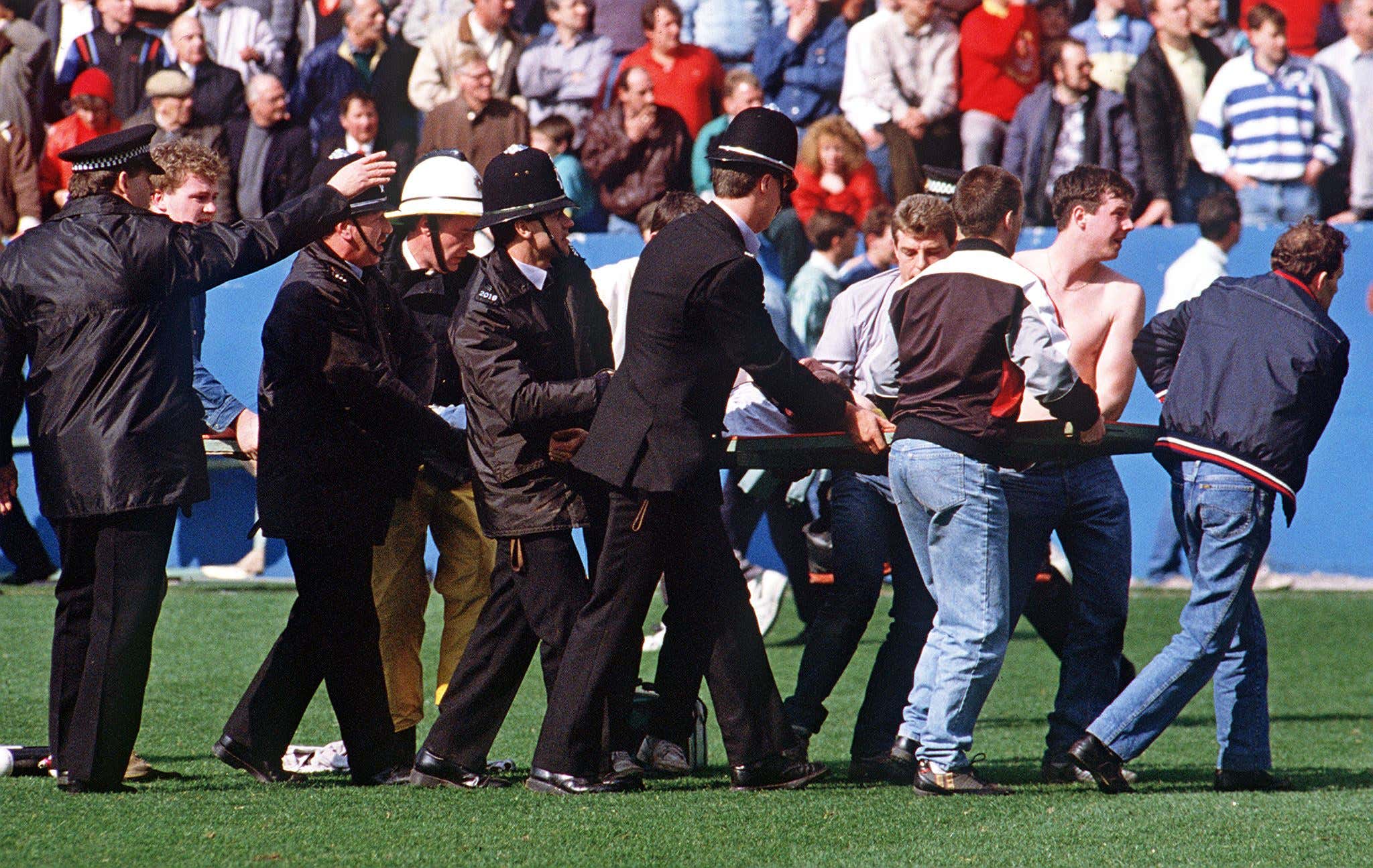 In the following days and weeks, police fed the press false stories suggesting that hooliganism and drunkenness by Liverpool supporters had caused the disaster. At the time, most English football stadiums had high steel fencing between the spectators and the playing field in response to pitch invasions.

Blaming of Liverpool fans persisted even after the Taylor Report of 1990, which found that the main cause was a failure of control by South Yorkshire Police.

The first coroner's inquests into the Hillsborough disaster, completed in 1991, ruled all the deaths accidental. Families rejected the findings, and fought to have the case re-opened. In 1997, Lord Justice Stuart-Smith concluded that there was no justification for a new inquiry.

In 2009, a Hillsborough Independent Panel was formed to review the evidence. It confirmed Taylor's 1990 criticisms and revealed details about the extent of police efforts to shift blame onto fans, and the error of the first coroner's inquests. The panel's report resulted in the previous findings of accidental death being quashed, and the creation of new coroner's inquests. It also produced two criminal investigations led by police in 2012: Operation Resolve to look into the causes of the disaster, and by the Independent Police Complaints Commission (IPCC) to examine actions by police in the aftermath.

The second coroner's inquests were held from April 1, 2014 to April 26, 2016. They ruled that the supporters were unlawfully killed due to grossly negligent failures by police. The inquests also found that the design of the stadium contributed to the crush, and that supporters were not to blame for the dangerous conditions.

There's several documentaries, including a '30-for-30' that aired on ESPN in 2014 about the Hillsborough disaster: