I'm late to the party but I'm so floored that I had to dip the pen on this, and I'm thankful to my Chicago pals for bringing it to my attention. Carl's tweet crossed my timeline and I was shocked for two reasons:

That's a 55 home run pace over 162 games with 10 fWAR in spite of being a butcher defensively.

Fucking video game numbers. BUT but but but the season was abruptly halted due to a strike with the White Sox sitting pretty in first place with a 67-46 record.  Go fucking figure, and it wasn't just Frank Thomas who got fucked over.

I didn't know the strike impacted that many guys historically but I really don't think I realized what a motherfucker of a 1994 season Frank Thomas had. This led me down a Frank Thomas deep dive:

He's obliterating those baseballs. I remember that part too. The part I don't remember is how much he got on base. .487 on-base percentage in 1994??? He was getting on base EVERY OTHER TIME he went to bat for 113 games?? That's preposterous. So are his first full 10-year numbers:

I love that you could pencil the Big Hurt in for precisely one (1) triple every year. Like Comet Hale-Bopp, if you missed it then you just had to wait for next season.

He's 20th all-time in career OBP with the caveat that 15 of the guys ahead of him have black-and-white pictures on Baseball-Reference. This is unique because it is one more color than was allowed in the Major Leagues at the time that they played:

I'm fine with putting The Big Hurt only behind Teddy Ballgame, Barry Lamar, Joseph Votto, and The Mick. Glad we could agree on this one.

Since this is apparently a thing that is available, let's have a look at Frank Thomas' career numbers if he played his entire career in Coors Field: 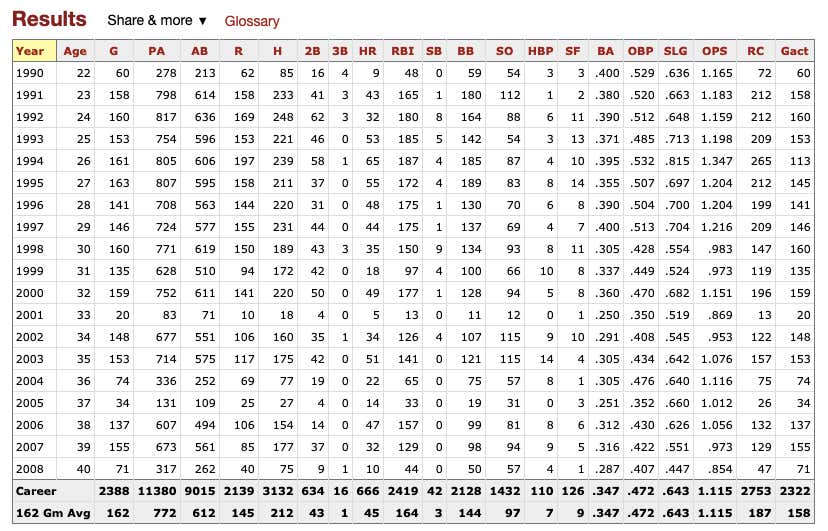 666 career dingers, yikes! 2,419 RBI would have him comfortably first of all time. He'd be second in career walks drawn and OPS. When time machines are made available to the public, this is how I will use them. Not to go back in time and stop catastrophes. But to draft Franky Thomas fresh out of Auburn to the Colorado Rockies. Imagine those dingers.