I'm going to be sick. Absolutely, positively sick! How could the Panthers do this? In times of crisis, no less. Have we not learned our lesson on paying running backs yet?? Clearly we have not.

This is to take nothing away from Christian McCaffrey's talent. He's an amazing running back and pass-catcher:

We just saw this play out with Todd Gurley. Gurley's third season saw him win Offensive Player of the year with 2,093 yards from scrimmage and 19 touchdowns. And he was with offensive genius, Sean McVay so if there was any running back to pay after three years!!!

I get it. Really, I do. McCaffrey's third season was better than Gurley's third season, even though he didn't win OPOY: Nearly 2,400 yards from scrimmage and 19 TDs. He's also been (knock on wood) much healthier than Gurley, with no ACL tears in college or alleged arthritis. Without Cam last year, he was on his own and had to do it all himself. How'd that work out for them?

And this was before he was the highest-paid RB ever! I hope this contract works out well and bucks the trend. Really, I do. McCaffrey is a joy to watch and that offense could be a lot of fun to watch…whenever we get to watch football again. But we've seen time and time again that investing money into the RB position just isn't wise. In an ideal world, you have McCaffrey play out every year of his contract and franchise tag him the maximum number of times allowed before letting him walk. This would be getting all of his value without committing yourself to any longterm money. But this isn't an ideal world, so I get the Panthers had to keep their star player happy as well as their fanbase.

But still, from Spotrac, these are the highest-paid RBs by annual average salary for last year: 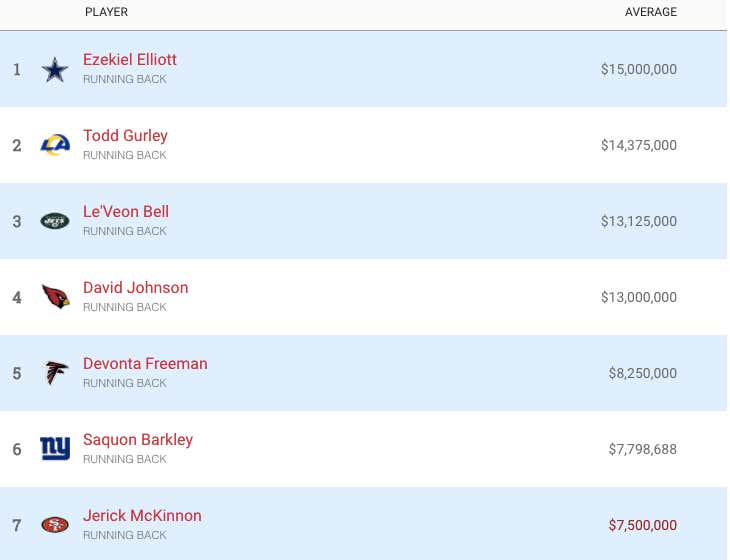 1. Zeke ran for 1350 yards. The Cowboys didn't make the playoffs but it'd be silly to say he didn't do his part.

2. Gurley was cut this summer after career lows across the board. Rams missed the playoffs.

3. Lev Bell rushed for 3 yards a pop this year for a terrible Jets team. A miss.

4. Johnson was traded this summer after another underwhelming season for a draft pick and some no-name WR that never even made First-Team All-Pro. Cardinals didn't make the playoffs.

5. Freeman was cut this summer after playing 16 games combined the past two seasons. Falcons didn't make the playoffs.

6. Barkley battled injuries to have a solid season for a bad team. Like Zeke, he did his part but the Giants missed the playoffs.

7. McKinnon has missed two entire seasons and never suited up for the 49ers since signing that deal. They did make the playoffs though.

That's not a one-year fluke either. We consistently see that there are other ways to find value at RB. Chris Carson was a 7th round pick and finished top-five in rushing yards this season. Carlos Hyde was available on the scrap heap and rushed for nearly 1100 yards. We saw what the undrafted Raheem Mostert and Damien Williams did over the course of the postseason. Austin Ekeler just got rewarded for a 1,500 total yard season with a 4-year $24 million dollar contract. McCaffrey is better than Ekeler, of course. But if he going to provide three times as much value? Because he's going to cost three times as much. I'll take the dropoff from McCaffrey to Ekeler in production if it means that extra $40 million keeps our offensive line together.

And when it's time for McCaffrey to get paid? You just find the undervalued running back in the draft like Derrick Henry, Nick Chubb, Alvin Kamara, etc. Or you sign them off the streets like Phillip Lindsay or Matt Breida. You find an old veteran that can eat get 500 yards for cheap like Frank Gore, LeSean McCoy or Adrian Peterson. Of course, you don't find one that can do all the things McCaffrey can in one body; that's why he got paid. But that's kind of the point, these guys don't cost nearly as much as CM. You can hit on a couple that combine to give you 75% of his production for 25% of his cost.

Also from Spotrac, these are the numbers for next year. It will be interesting to see if CM can buck the trend in the way that the Panthers are betting. 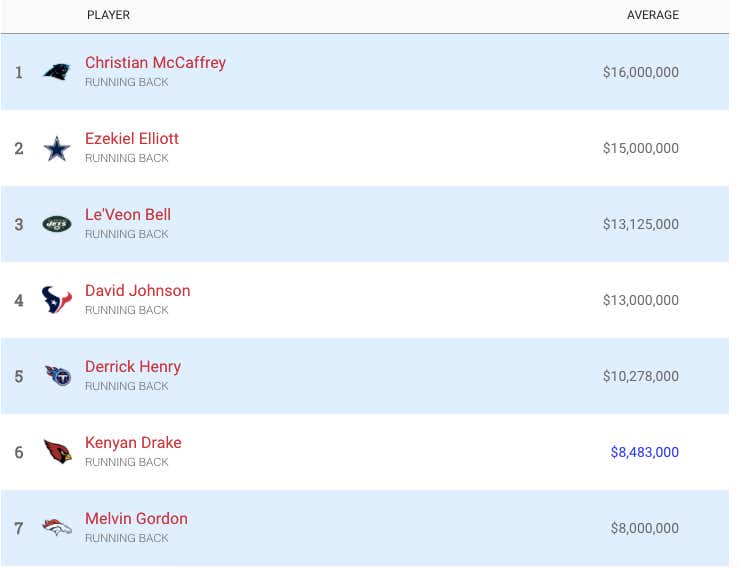 Also, it's funny how little this money is in the sports world. Like $64 million is a lot to us. Hell, it made McCaffrey the highest-paid RB of all time! Nicolas Batum will make $52 million dollars over the next two years just for being Nicolas Batum. If Cody Zeller sees McCaffrey at the bar, he's handling his tab without a problem. McCaffrey, the highest-paid running back EVER would be the fourth highest-paid Hornet this season. Rozier is picking up the tab at TopGolf and he won't hear another word about it. Good times.