You can learn a lot about a person by being locked inside with them for a month with no end in sight. Some people have the fortune/misfortune (depending on how you look at it) of being alone during all this. But I'd say the majority of people are locked up with someone else, whether it be family, friends, or significant others. The latter is probably the most difficult situation. Relationships are either being strengthened or torn apart during this. People on the r/AskMen subreddit shared things they've learned. Some are heartwarming. Others are just depressing. We will ignore all those. Instead, we'll look at some of the most bizarre ones.

What an absolute bombshell to start off the thread. How can one live on this planet and not know Eminem is white? It's like his number one thing. He's the white rapper. He's probably more closely associated with being white than anyone I can think of. Astounding.

Laugh out loud funny lie. We don't know the full context, but thanks to some stalking from u/RoundThatTrack we can kind of put the pieces together.

"I can't argue with you right now, my child's teacher just died!"

u/Gilamonster39 has finally answered life's greatest question. Do girls fart? Apparently they do. Are you going to try to tell me that they take shits too? What follows is a detailed exchange on general farting habits. 20 farts a day initially seemed high to me, but the more I think about it, the more it sounds right.

Not only is this girl a farter, but she can do it on command! Put a ring on it.

I initially almost scrolled past this one assuming it was a joke, but u/-dank-matter had some more details. You have to imagine this is one of the worst things to find out during quarantine, slightly behind her being bad at closing the fridge.

It is a great fucking movie, so at least she knew that. 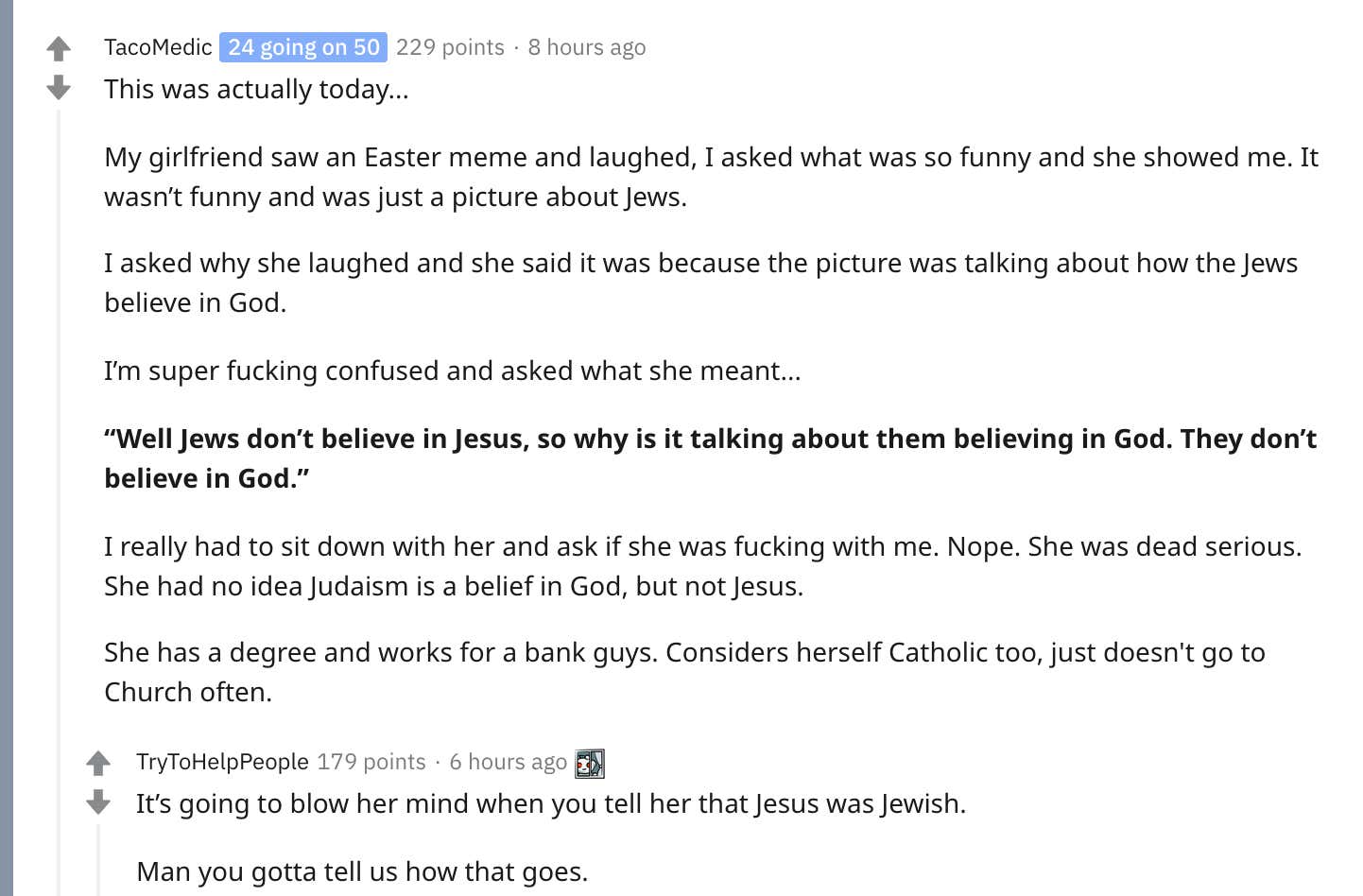 Need that livestream of that big "Jesus was Jewish" reveal.

I have been eating PB&Js basically every single day during quarantine, so I will share my thoughts on this. As for the first bullet, I don't think this is that outlandish. I don't eat the first end piece first, but I eat it towards the end with a regular piece. I don't like pairing the two end pieces. But I don't mind having two separate sandwiches with one end piece each.

As for the second bullet, I don't think order matters as long as you wipe the knife off when switching between jars.

"Ya'll wanna head down to the park and shoot some meatball with the boys?"

Finally we have an answer.

What's the weirdest thing you've learned about your SO/roommate/family during quarantine?