It happens to all of us who spend time on Twitter but don't live on Twitter. We high profile men of the world who spend most of our time living our fascinating, mythic lives, making love to beautiful ladies and hanging out with our in-demand friends in fabulous places miss things from time to time. Sometimes we'll get mentioned and it won't ping our cultural sonar because we're too busy in the real world. Or by the time we do catch it, an eternity has gone by from a social media standpoint. So you weigh the pros and cons decide if it's worth plucking from the fast moving current that is the might River Twitter, or just let it keep floating downstream.

Such was the case with Julian Edelman, who woke up over the weekend, came across this old clip of Nick Wright working himself up into a foamy-mouthed frenzy over a fictitious trade that someone pulled out of their crack that will never, ever happen, and decided the insult of it could not go unchallenged. 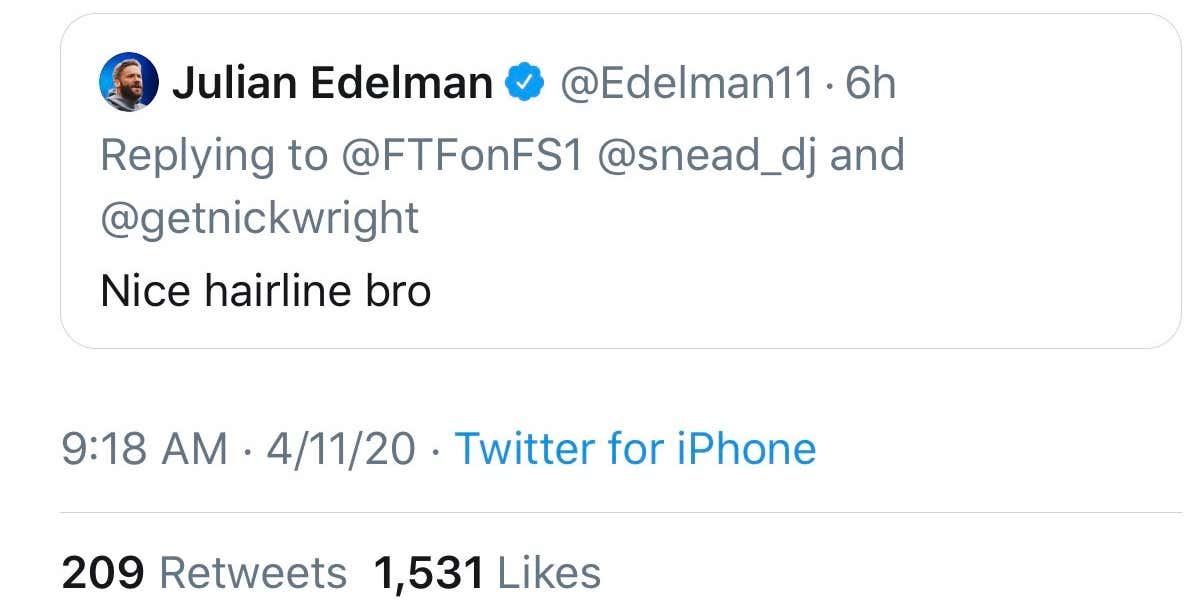 The post has since been deleted. But the reason Satan invented the Internet is so that everything we ever virtually say or cyber do lives forever. Thanks for that, Prince of Darkness.

Speaking as someone whose only issue with his hair is its premature greyness - and other than that his hairline and thick, lustrous mane are pH-balanced perfection - I'm guessing this is a low blow? That would seem to be the case judging by the fact Edelman took it down. And by Nick Wright coming right back with a below the belt counterpunch.

Look, I'm in no position to score this bout. I've got a cock in this fight and can't pretend to be impartial. It'd be like asking me to judge an MMA match between one of my brothers and the Chiefs fan who shined a laser pointer in Tom Brady's eyes. But there's no getting around the fact that one guy's hairline is going to keep receding like the Antarctic snow cap and the other will be back to hanging out in Beverly Hills getting drunk with Paul Pierce and Danny Amendola in no time. So it doesn't matter what I think. Edelman is winning at life. And as long as famous people and semi-famous people exchange low blows on Twitter, we all win.