I just can't stop. $15 is the perfect amount of money in these instances and I can't help myself. 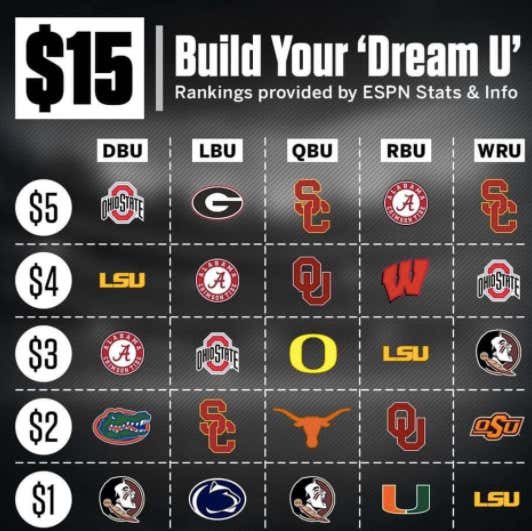 First things first, I'm looking at these for current players. I'm not sure if the graphic meant all time, but I'm going with guys that are still active or going into the draft this year.

Bama should probably be the most expensive option here. Give me the strength of the Tide (Dont'a Hightower, CJ Mosely, Rashaan Evans, Mack Wilson) over the speed of the Bulldogs (Roquan Smith, Alec Ogletree, Thomas Davis).

It's very funny that Texas is an option here because they clearly produce the best quarterbacks but none of them go to the University of Texas to play quarterback. Bummer.

The Sooners is the choice here. With Kyler Murray, Baker Mayfield and Jalen Hurts on the way I'm set.

I double up on the Sooners for my backfield here. They've got a young stud (Mixon), a wily vet that can get me a few yards (Adrian Peterson), my sparkplug off the bench (Damien Williams) and depth (Rodney Anderson).

Saved by the bell because boy, I was out of money. But a steal nonetheless! Odell Beckham Jr, Jarvis Landry, DJ Chark and the rookie Justin Jefferson. All for a $1? Easy money.