You guys been reading me for a while, right? You guys know just how prone to hyperbole I am, yes? Everything I say is " - of all time," " - ever" "greatest" etc etc. And I do that so often that sometimes I need to specify, "listen, this time, I'm actually being serious...no exaggeration, this guy is actually the worst person to ever exist." But honestly, I've been doing this so long that even the amount of times I given that "no hyperbole" speech has become over saturated as well. So this is the first time I'm giving you the Double-No-Hyperbole-I-Mean-This-Literally-And-Not-The-Figurative-Literally Disclaimer. I truly mean this from the tips of my toes to the top of my skull...deep within the cockles of my heart:

This guy is the worst fucking person I've ever encountered on the internet.

At a time like this, I wouldn’t wish ill upon anybody...except this guy. I truly, genuinely wish the worst for him. I hope this guy finds himself in need of help from cops or firemen somewhere and I hope they smile at him and say “good luck with all that, dickhead.” You know that scene in Celtic Pride where the cop stumbles upon Dan Akroyd and Marv from Home Alone chasing Damon Waynes during the kidnapping? And he just pretends like he didnt see anything? "This is...BIZAHHH"

I hope that happens to this dude. Except I hope its way worse circumstances. I hope hes scared to fucking death and his life is on the line - because thats what the reality is for a lot of Cops when they are on the street for their beat. I hope he finds himself in an absolutely terrifying situation with his life on the line and the cops take out their phones, film him while hes shitting his pants, and say "Dont forget to smash that subscribe button, dickhead!"

Because I respect Cops. I do. I respect cops that arent assholes, because those are guys and girls who put their lives on the line in this godforsaken city. Cops that kill people or hurt people...cops that use their badge and their gun as some sort of shield while they get their racist rocks off? Those people are despicable. Its wild that you need to explain yourself for a very basic concept of "a few bad apples," but you do. So, here it is for all the rational people with brains - "The cops who risk their lives to protect me and you are heroes, the cops that break their oath and use their job to harm people deserve to get their ass beaten." You gotta clarify because people like this dude are always lurking with some political argument ready to call you names and accuse you of being a bad person because you have the capacity to understand that not all people under the umbrella of one profession are always good people, and that a small number of bad people does not, in fact, erase an ENORMOUS amount of good provided by the people who are not corrupt and racist.

So now that we've taken care of the "I'm a logical and reasonable adult" portion of the blog, lets get back to this dickhead. I was praying...PRAYING...that we would get a big reveal in that video. As I watched the time tick down, I was getting nervous we would never see this film's great protagonist. I needed it. I needed to see his face like I need air. And when he spun that camera around and this was the reveal? 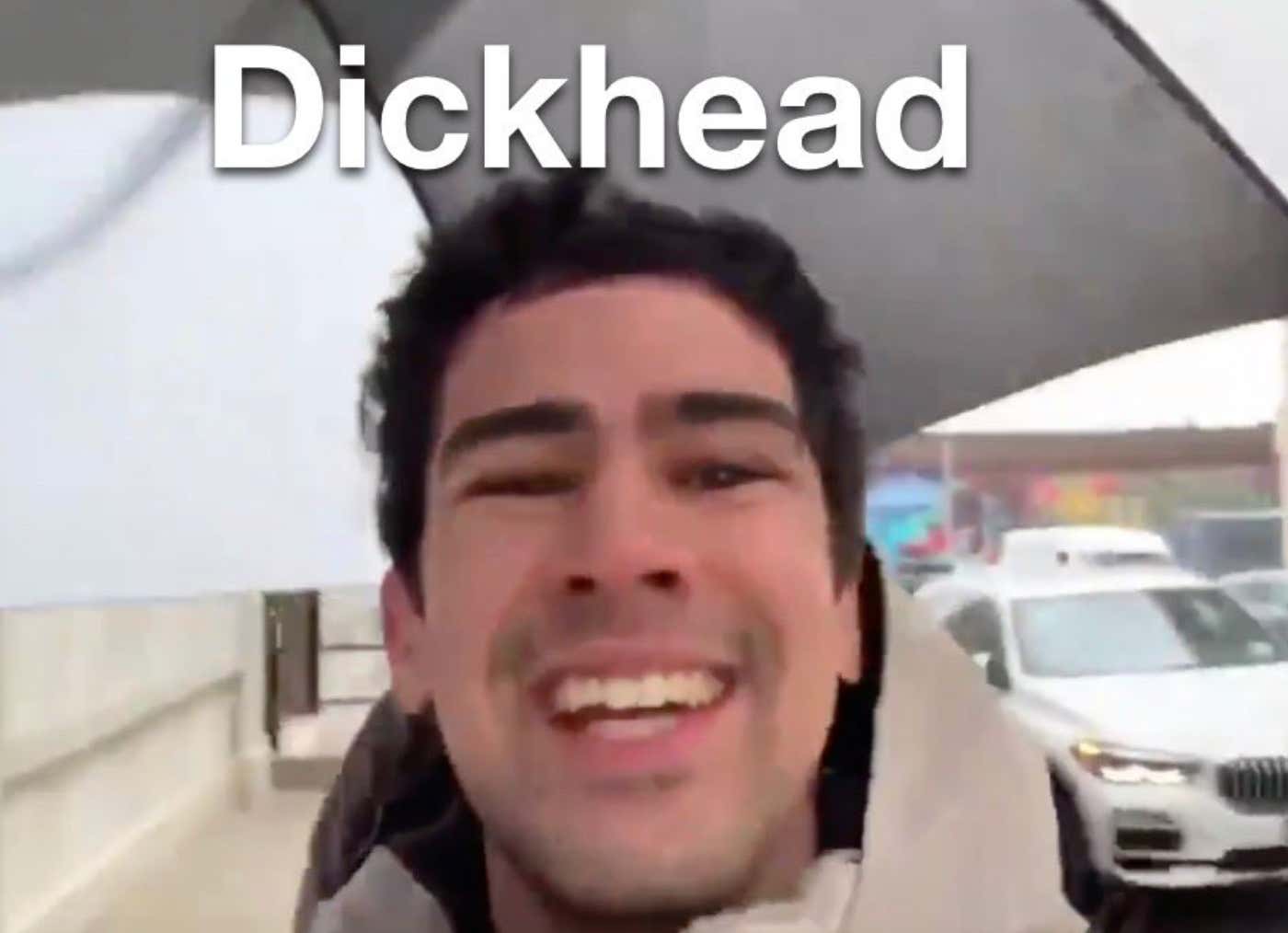 *Chefs kiss* That was perfection. Not that anybody should ever act that way towards cops (or anybody, generally speaking), but certain groups of people certainly have a much different experience with law enforcement than others. Depending on who was behind that camera was really going to define just how big of an asshole move it was to make this video. I was praying the face would match the voice and we would have exactly this - a young, white male who doesnt realize the overwhelming irony of acting like he is some sort of oppressed activist. A guy hating on the cops who couldnt even possibly fully comprehend what profiling or brutality or racism even feels like. Most times you see a video like this, there actually is some deplorable behavior going on. You see law enforcement ganging up on someone or an innocent person being harmed or killed because of the aforementioned bad apples and you can sometimes understand where people's negative perception of cops comes from. But this fucking DICKHEAD walking through his gentrified hipster neighborhood with his golf umbrella probably from his parents country club trying to pick a fight over the cops parking in front of a yellow curb? Well thats honestly so good it makes me wonder if its scripted. Like this is too good to be true as a blogger. This man is such an absolute DICKHEAD that it feels like it might not even be real.

Because its not just this one video I've seen of our guy. No, no. Thankfully as our hero so astutely explained, freedom of speech and expression and information and public records and all that? Yea, that goes both ways. So the internet did what it does and tracked this guy down instantly and I found myself on his Youtube page. "Mr. Uncensored" is his name. What a cock. And let me tell you...if you didnt like him after this video with the police, you are going to absolutely LOATHE him after watching his videos talking about the Constitution and the Declaration and the New World Order and all this other BULLSHIT. Hes The One. Hes the Neo of being an asshole, and I am Morpheus. I have found The One. He's such a dickhead and this video is so laughably lame and overwhelmingly cliche that I almost feel like this might be an act?

I mean lets look at some of the highlights:

WHAT an intro to todays topic:

What a professional callback to his previous work:

And my personal favorite, walking his dog Sonny while delivering his New World Order manifesto:

I mean this guy knows these arent live, right? You can edit these things out? These wildly embarrassing bad parts dont need to be published. Like he has to understand that walking through his trendy neighborhood with his puppy while trying to convey this message as some sort of oppressed revolutionary doesnt work, right? Its truly so bad I started to wonder if this was all a ploy. Like one giant social experiment, word to Marshall Henderson.

But then I remembered, if you're the type of DICKHEAD to post a video focusing on where 2 police officers parked their car, thinking you're gonna come off as the internet hero once it goes viral, then you're probably just a fucking dickhead who has ZERO social awareness. I started to realize that this guy was so blinded by his hatred for law enforcement that he couldnt even see that he was coming off as a typical spoiled fucking dickhead. So then I began to wonder…what could it possibly be that makes him hate the NYPD this much? As a young white male, theres no chance hes ever actually been profiled or unfairly treated. No chance hes ever been arrested unless he was trying to so he could get his street clout up. Like what could possibly be the reason for such hate in your heart? Hmmm. I wonder. I wonder if there was some sort of personal axe to grind against the New York Police Department. Hmmmm.

And the truth, shall set you free! Now it all makes sense. Johnny Revolutionary over here is nothing more than a scorned woman who got denied by the girl he had a crush on!

And as we know, hell hath no fury. Johnny got denied by the hot chick. He sent her a message on a dating app, she politely declined and said thanks, but she wasnt interested, and Johnny wrote back "Fuck you, you fucking whore! You're not worthy of me anyway. You DICKHEAD." And now lil ol' Johnny has sworn off all women. Thats this dickhead with the police. He didnt make the cut and so when he sees a real police officer in the uniform, working the beat he so desperately wanted, he lashes out like a baby. All before making it back to his brownstone on his nice tree lined block in his new up-and-coming Brooklyn neighborhood where he makes trite, unoriginal, useless videos for his failed Youtube page. In case you were wondering though, he took the police test just to find out what it was like, and he knew he wasnt gonna get selected:

He like, totally didnt want that job anyway. Since thats a think that people definitely do. They definitely apply for jobs they dont want just to "see what the process is like." Definitely not bothered at all by the rejection. Thats for sure not the root of all your issues, Mr. Uncensored. You totally handle rejection well. Its not your fault, Mr. Uncensored!

And also lets all take it easy on the guy who willingly made an antagonistic video, posted it publicly with the hopes that as many people as possible would see it, and then didnt like that he was getting negative attention for his behavior. Mr. Uncensored is here to remind us that when you go viral, you should get to choose exactly how the public responds to your behavior and that you should get all of the positive attention you want with none of the negative blowback:

Thats RICH coming from this dickhead. But it pales in comparison to the SPECTACULAR levels of hypocrisy coming from his comment to @No Names:

I mean theres just no way an adult with even a semi-functioning brain doesnt see the irony there, right? Complaining that the NYPD's reaction to your video is not free speech, but rather harassment and intimidation…but that said video of you screaming expletives and insults at two people who did absolutely nothing to you… now, that is not harassment? Thats free speech? Not since Clayton Bigsby have I been this confused:

Bottom line is, words cannot express how much I fucking hate this kid. I cannot articulate how much he sucks as a person. From his know it all attitude which has clearly been misguided by his own social issues, to his bullshit hackneyed views on government and society which is all 100% geared towards making his life as easy as possible, to his treatment of cops who 99.9% of the time are helping him, down to his stupid fucking voice and his awful attempts at being a successful internet personality. All of it. I hate it. But I just cant find the right word to describe him. Its almost like if you could take a penis, and bring it to life. But not just the whole penis. The very top of the penis. And not a good looking penis. An ugly, uncut, dirty one. If you could personify that…bring it to life…and listen to that thing talk and rant? That would be Jonathan. He's unsettling to look at…very unpleasant to engage with…and once you've seen one, you've basically seen them all. Hes just a stereotypical penis top. A derivative dickhead.

I hope all the bad things in life happen to you, and nobody else but you, Jonathan.