Remember? That show we all used to watch on Sunday evenings, not unlike this one? Remember how they were going to do a final season? Whatever happened with that? There are spoilers below. 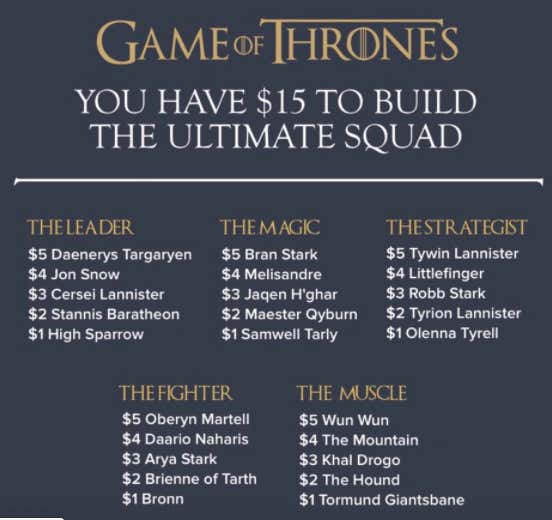 Ok so I am absolutely addicted to these $15 pickem things. Can't get enough of them. Let's get to it.

Big money spent right out of the gate. I was tempted to go with the High Sparrow because that shoeless filthy fuck had a mob ready to go on his word. Ultimately I had to ask myself, what leader comes with three (3) dragons? That was my answer here. And I'm the GM here so I'll make sure that Dany doesn't forget the small things like Euron's fleet chasing her.

The Many-Faced God? The Braavos Brawler? For $3?? EASY MONEY. Bran, no because fuck Bran. Melisandre showed out when she lit the swords of the Dothraki and how did that turn out? Also, she failed Shireen so fuck her too. Qyburn is a value here as well for $2, but not at the expense of Jaqen. Samwell Tarly's magic power was reading to the blind, getting his ass whooped and premature ejaculation. Not exactly helpful here.

I am absolutely burning through my money. Olenna was my pick at first for value purposes and because after admitting to Jamie what she did, she got to take the poison and go out comfortably instead of on the other end of the steel.

Tywin, a master strategist and the best dressed on the entire show, gets the nod here. He understands how to rule directly (war) and indirectly (through Tommen). I let him worry about the strategy and he lets me worry about getting a lock for his shitter.

Ser Bronn of the Blackwater in this bitch!!!! Oberyn went out bad...possibly worse than anyone in history, fiction or non-fiction. Daario and Brienne ended up down bad because of love. I can't have you fighting for me with a broken heart. Arya is tempting here and probably the right choice, but alas I have spent all my money. Bronn is the top sellsword in the land and a world-class cocksman in his own right. Catching feelings won't have him slipping.

Let's not overthink this one. A papercut took out Khal Drogo. Wun Wun went out on the battlefield like everybody else. And the $2 option knocked off the $4 option here, but he was also left for dead by a 10-year-old girl. This leaves literally the only one still alive: Tormund Giantsbane. He survived his bracket (Battle of Castle Black, Battle of the Bastards, Battle of Winterfell) and it's a shame that the others couldn't say the same.