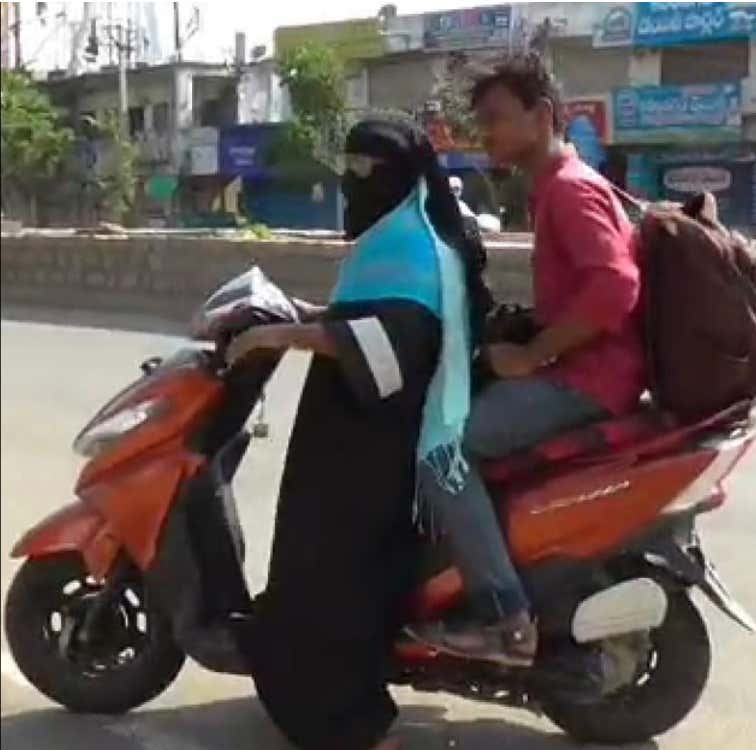 With a decade of experience in the game, I can pick up a scent like a blog bloodhound: if the story is in an outlet you've never heard of and happened in a place you've never heard of and can't pronounce or spell...a red flag goes up. A little bit. A little red flag. So keep your head on a swivel for this story, about what is possibly the most badass mom in the history of mothering children.

SAYS — Her elder son, Nizamuddin, was stranded in the neighbouring state of Andhra Pradesh after the Indian government announced a sudden nationwide lockdown during the last week of March.

With public transport shut and no means to ensure his safety, the mother decided to undertake an incredible journey of more than 1,500km on her scooter that lasted three days.

The gritty woman, Razia Sultana — who is named after Raziya al-Din, the first female Muslim ruler of South Asia during the 12th century — was determined to bring her 19-year-old son home at any cost.

She rode for about 1,600km for her son, half of it alone passing through half a dozen villages.

I know you love your mom. I know your mom has done some incredible things for you in your life, not to mention she gave you that life in the first place (unless you're adopted sorry). She's sacrificed so much and made sure you were taken care of and put your needs ahead of her own.

But has your mom ever ridden her scooter 1,500 KM to Andhra Pradesh and back because you were locked down in a shitty place for the Coronavirus pandemic quarantine?

Only Nizamuddin Sultana is raising his hand right now.

He was stuck in Nellore town, about 800km away from home in Bodhan, where his mother lived together with her two other children, younger son Yasar and daughter Ayesha, according to The Hindu.

After attempts to bring him back in a transport truck failed, a distraught but determined Razia decided to set out for Nellore herself on her scooter, reported a local newspaper, Telangana Today.

I mean look at this trek I just mapped out!

No wonder Razia Sultana was named after Raziya al-Din the first Muslim female ruler of South Asia during the 12th century.

If she is real and this story is real of course.

Legitimately up in the air at this point.

Do scooters make it that far honestly?