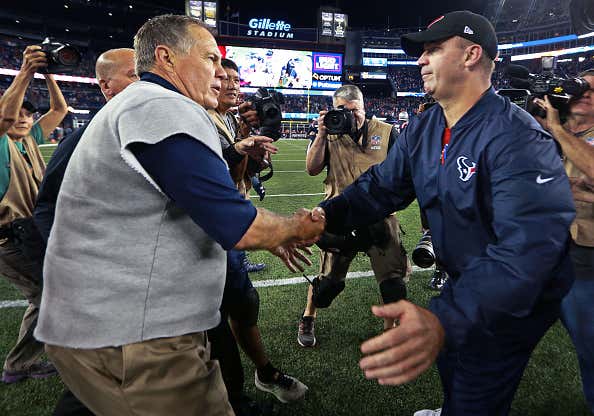 When a former first round pick has been traded three times before the age of 27 and his heading to his fourth team in just five years, it's not the biggest earthquake to ever move the Richter Scale needle. But this latest trade of Brandin Cooks serves as the pluperfect example of the difference between the best GM in the tackle football game, Bill Belichick, and arguably the worst, Bill O'Brien

I'm no Large nor am I Davey Day Trader. But about eight careers ago or so I did work at a mutual fund firm. And while I learned a lot, I've retained very little of it. It's sort of like how I took three years of German in high school but haven't used it since so all I remember is how to say "excuse me," "how do you say _" and "I love you." And that last one only because it's "Ich liebe dich," pronounced "dick," which is hilarious." Anyway, what I remember about investing are two simple principles: Buy low and sell high. And depreciating assets.

Which brings me to Brandin Cooks. He's a nice player. Over a four year stretch he produced about 4,500 receiving yards and 29 touchdowns. But his whole career trajectory has been trending down in terms of his value.

That is the difference between the top and the bottom of the NFL's personnel people. It's like a Goofus & Gallant cartoon of football general managers. "Gallant uses a pick to trade for a wideout who was drafted 12 slots higher, uses him for a year and then flips him for a pick nine spots higher and gets his left tackle for the next 10 years. Goofus uses as much draft capital to get this declining asset as he got back for the world's best receiver." It's incredible.

To review: Belichick picked this guy up on the cheap, got the most out of him for one season while still on his rookie deal with not much of a cap hit, then increases his value on the trade market. He bought low, sold high. O'Brien grossly overpays to get the same player while he's depreciating like a car that's out of warranty. Cooks is by no means the most important player either of them have ever dealt and in the long run these won't make either GM's Top 10 biggest trades list. But still it says everything about how they operate.

And just as a reminder, this is the player in question: